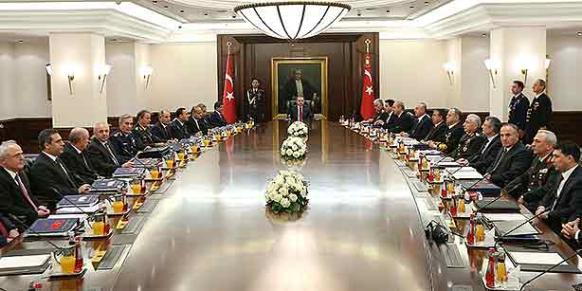 Speaking during a TV program on TV Net channel on Friday evening, Sabah reporter Abdurrahman Şimşek, who shared his comments about the MGK meeting, said: “There is such a joint decision. No structure will be allowed in the state from now on. Not Süleymancıs, Nakşis, Menzilcis or İskenderpaşıcıs or any members of the İsmailağa community. There will be an effective fight against all [religious] groups.”

These religious communities have been in existence in Turkey for years and they have hundreds of thousands of followers. Even during coup times when immense pressure was imposed on these communities, they managed to survive.

Thursday’s MGK meeting saw many firsts. President Recep Tayyip Erdoğan, who occupied the seat of the prime minister for the past 12 years at MGK meetings, chaired the meeting for the first time as president, while former Foreign Minister Ahmet Davutoğlu attended the meeting as prime minister for the first time. It was the first time that Deputy Prime Ministers Numan Kurtulmuş, Yalçın Akdoğan and Foreign Minister Mevlüt Çavuşoğlu attended the MGK meeting. Thursday’s MGK meeting lasted for 10 hours and 25 minutes, the longest MGK meeting in the history of the Turkish Republic. It was even longer than the notorious nine-hour MGK meeting on Feb. 28, 1997, following which a military coup, dubbed a post-modern coup, took place.

According to a story in the Taraf daily over the weekend, a member of government at the meeting suggested that the so-called parallel structure, a term used by the Justice and Development Party (AK Party) and pro-government circles to refer to the faith-based Hizmet movement inspired by Turkish-Islamic scholar Fethullah Gülen, be recognized as a terrorist organization and be added to the Red Book, a national security document in which major threats against the nation are enumerated, and other government members supported the proposal. However, since members of the military at the meeting said if such a step is going to be taken it should apply to all religious communities as well as the terrorist Kurdistan Workers’ Party (PKK), the Kurdish Communities’ Union (KCK), the Democratic Union Party (PYD) and all their extensions, the government could not insist on its proposal.

Prior to the MGK meeting, pro-government media outlets ran stories suggesting that the “parallel state” would be recognized as a terrorist organization and go into the Red Book during the MGK meeting. President Erdoğan also made statements in the same vein.

The Hizmet movement promotes interfaith dialogue and the resolution of problems through peaceful methods all over the world. However, Erdoğan and his former party, the AK Party, have been at odds with Hizmet, especially since Dec. 17, 2013, when a major government graft operation implicating senior government members became public. Erdoğan claims the operation was orchestrated by the Hizmet movement with the motive of overthrowing the AK Party government. Erdoğan has not provided any evidence to prove his claim, and the movement denies the accusation.

The Taraf report, which the daily said was based on government sources, said there was harsh criticism of Interior Minister Efkan Ala at the MGK meeting from the military for the increasing violence in the country perpetrated mainly by the PKK and its sympathizers.

A statement made following the MGK meeting, prepared by a commission led by Deputy Prime Minister Akdoğan, included an article at the top voicing determination to fight against all parallel structures. Taraf said this was done deliberately to give the impression that MGK discussed the fight against the so-called parallel state for hours, although government sources told the daily that the parallel state issue was discussed for only 25 minutes.

Issues such as the PKK, the KCK and pro-Kurdish Peoples’ Democratic Party (HDP) protests in the country’s southeast, attacks by the Islamic State of Iraq and the Levant (ISIL) terror organization, the passage of peshmerga from Turkey to the Syrian Kurdish town of Kobani and measures to be taken against domestic and foreign threats were discussed at the meeting.

In the meantime, leader of Workers’ Party (İP) Doğu Perinçek, who spoke at an event organized by his party in Balıkesir province, said there will be extensive mobilization to make people aware of the need for the eradication of religious communities in the society.

When he was released from prison early this year after serving for some time for being a member of Ergenekon, a shadowy crime network that has alleged links within the state and is suspected of plotting to topple the government, Perinçek said he would collaborate with Erdoğan for the eradication of religious communities, the Hizmet movement in particular.

In another development, Democratic Left Party (DSP) leader Masum Türker told Today’s Zaman that the lengthy MGK meeting indicates that national security is about to fail.

Referring to a phrase in the MGK statement that talks about fighting all “illegal structures that look legal,” he said this threatens all civil society organizations in society.

According to Türker, since its foundation in 2002, the AK Party government has aimed to kill off civil society in the country.