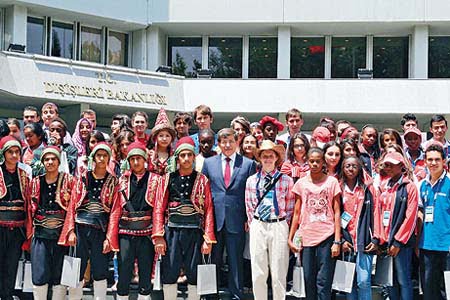 Turkish Foreign Minister Ahmet Davutoğlu has praised the 11th International Turkish Olympiad, a festival that celebrates the Turkish language, as the “most effective” instrument for promoting Turkey, while receiving students visiting Turkey as part of the Olympiad.

The 11th Olympiad is organized by the International Turkish Education Association (TÜRKÇEDER) and began on June 1 with a grand ceremony in Ankara. It will end on June 16 with a closing ceremony to be held at Atatürk Olimpiyat Stadium in İstanbul. During the event various stage shows have been performed by Turkish Olympiad students in 55 Turkish cities.

Participants across the country have continued to put on performances and shows. On Tuesday night, a stage show took place in the eastern province of Erzincan with the participation of 92 students from 20 countries. Nearly 30,000 locals flocked to Erzincan 13 Şubat Stadium to see the singing and dance performances and poetry recitals of the Turkish Olympiad students.

There were many politicians and top-level government officials among the attendees. Making a speech at the show, Transportation, Maritime Affairs and Communications Minister Binali Yıldırım said: “The students, each of whom is an ambassador of culture and a dove of peace, offers us a tremendous visual feast by showcasing their talents this evening. They show us respect, understanding and dialogue, which we as a nation need most nowadays. These young people show us how all the doors are opened with tolerance and dialogue without differentiating between Kurds and Turks, leftist and rightist or white and black people. I salute Hocaefendi [well-respected Turkish Islamic scholar Fethullah Gülen], who not only has educated people for nearly a half century, but also makes great efforts to introduce our Turkish language, culture and civilization to the world and devotes himself to achieving these goals.”

Yıldırım also defined Turkish teachers working at schools in 140 countries around the globe as anonymous heroes, expressing his gratitude to them for their efforts. The event ended with a choral performance of the students, who sang a Turkish song titled “Constructing a New World.”

A similar stage show was held in the eastern province of Bingöl on Tuesday night with the participation of 70 students from 15 countries. The spectators showed the greatest interest in the performance of a Tanzanian student who sang a song called “Tanzanya’nın bağları” (Tanzania’s vineyards). This song was a cover of a famous Turkish folk song, “Ankara’nın bağları” (Ankara’s vineyards). Another performance that drew the attention of the audience was a Kurdish song named “Şemmame” sung by a Tunisian student.

Development Minister Cevdet Yılmaz, attending the show, praised the efforts of the teachers working at Turkish schools across the globe, stating that those teachers leave their homeland and are working tirelessly in countries they don’t know at all. Yılmaz said he sends his respect and greetings to those teachers.

Turkish Olympiad stage shows were also held in the provinces of Balıkesir, Batman, Sakarya and Kırıkkale on Tuesday night. A total of 40,000 locals attended the stage show held in Balıkesir, in which 80 students from 21 countries participated.

A total of 190 students from 27 countries took part in the stage show performed in Sakarya on Tuesday night. Ruling Justice and Development Party (AK Party) Deputy Chairman Süleyman Soylu was among the attendees. Soylu defined the organization of Turkish Olympiads as a miracle, which introduces the Turkish nation and its culture and traditions to the world.