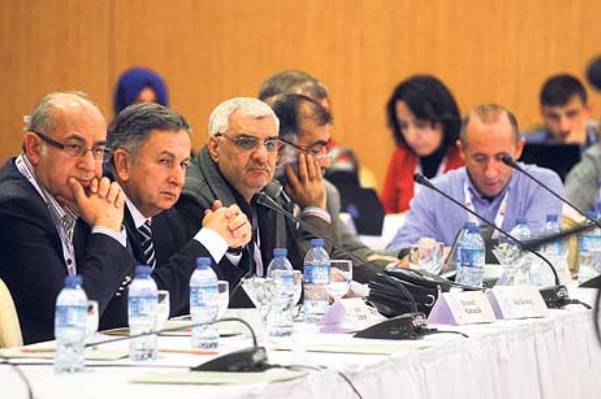 On the first day of the 30th Abant Platform meeting on Friday on the Alevis issue in Turkey, Alevi and Sunni intellectuals and opinion leaders agreed that the problems date back to centuries ago and are more complicated than they seem.

The event, titled “Searching for peace and a future together,” brought together representatives of various Alevi communities as well as Alevi and Sunni pundits, journalists and academics in an effort to have a comprehensive debate on one of the lingering problems of Turkish society.

The president of the Journalists and Writers Foundation (GYV), Mustafa Yeşil, emphasized the importance of the “love for the family of the Prophet,” which is considered significant among both Sunnis and Alevis. “It is a chain that ties us to each other. It is a remedy to our problems,” Yeşil commented, adding that the Alevi and Sunni faiths should not be made sources of conflict.

History professor Ahmet Yaşar Ocak, an expert on Alevi history, said Alevism has over a thousand-year-old history and could not be limited to descriptions such as loving the family of the Prophet or a different interpretation of Islam.

Yeşil emphasized the importance of the “Abant soul” that considers diversity a wealth since the Abant Platform traditionally bring people from opposite sides of the spectrum together on contentious issues. During his opening speech, Yeşil said, “It is very important for those who represent justice to be powerful and for those who are powerful to be just.”

Professor Ocak rejected defining Alevism as an issue in a negative connotation and said the problems stems from a state that has not been able to democratize itself. According to him, overlooking history is a wrong and misleading approach as history determines what happens today.

Dividing Alevi history into three — the Ottoman-Safavid state clash in the 16th century, the period up until the 20th century and the republican era — Professor Ocak said the vivid Alevi memory of massacre dates back to the killing of Alevis by Ottoman sultans during the war with the Safavids as they shared the same faith. The 16th century serves as a breaking point for Alevis as they isolated themselves from the Sunnis and lived along the periphery, according to Ocak.

Due to a sense of insecurity during the Ottoman Empire, Alevis strongly supported Mustafa Kemal Atatürk and the establishment of the republic with the hope of a comfortable life, Ocak says. However, they had two major disappointments with Atatürk: the exclusion of Alevis during the establishment of a state religious institution (the Religious Affairs Directorate) and the law banning religious orders in 1925.

With regards to Alevis as a minority, Professor İhsan Yılmaz from Fatih University said the understanding that minorities should make sacrifices for the majority is unacceptable.

A former deputy, Reha Çamuroğlu, also said Alevi problems have a long history because the sources of religious differences date back to 14 centuries ago. Expressing a bond with the Safavid state and its ruler, Shah Ismail, Çamuroğlu said he considers himself a descendant of Shah Ismail due to their common denominator, Turkishness. He noted that as many places in modern Turkey were under the rule of the Safavid state, his legacy remains.

On a similar note, the editor of Yol TV, Necdet Saraç, said he feels closer to Shah Ismail than to Yavuz Sultan Selim or to Kanuni (Süleyman the Magnificent), arguing that Ismail was much more Turk than the other two. According to him, the stars that symbolize the former Turkish states in history on the flag of office of the Presidency does not include the Safavid state although it was Turkish simply because it was an Alevi state.

In a striking statement, Saraç said “there is no thousand-year-long brotherhood between Alevis and Sunnis,” adding that the 16th century was magnificent only from the perspective of Sunnis. He called the Alevi issue society’s oldest issue.

Constitutional law professor Levent Köker also touched on the enormous budget of the Religious Affairs Directorate which is only allocated to Sunnis. He said to ensure equality, the state should grant an institutionalized status to religious communities which is only possible by drafting a new constitution.

The president of the Turkey-Europe Education and Scientific Research Foundation (TAVAK), Professor Faruk Şen, spoke about the status of the Turkish diaspora, which comprises 6.8 million people, and said there is a divergence between Alevis and Sunnis in the Turkish population in Germany. Giving examples from the German state, Şen said religious communities in Turkey should be able to manage their own budgets.

Professor Besim Dellaloğlu acknowledged a polarization in Turkey among different groups, including Alevis and Sunnis, and said people should be able to define cemevis however they perceive.

The speakers also agreed that Alevis began to urbanize at a later stage in modern Turkey. Professor Rıza Yıldırım said the emergence of urban Alevism is inevitable although it is difficult to keep some of their traditions while living in cities.

Journalist Şükrü Küçükşahin criticized the government’s Alevi opening, saying it is not possible to reach out to Alevis if one makes people boo Alevis in rallies in reference to one of the rallies held by Prime Minister Recep Tayyip Erdoğan.

Dr. Doğan Kaplan from Necmettin Erbakan University mentioned news stories in the Turkish press about Alevi religious figures (dedes) taking trips to Iran, pointing out there is nothing wrong with visiting Iran since there are holy Shiite shrines there.

The Abant Platform is an independent think tank that takes its name from Lake Abant in the province of Bolu, the location of its first meeting. It is one of the most well known programs of the GYV. The GYV was founded in 1994. Its mission and work were inspired by the GYV’s honorary president, Islamic scholar Fethullah Gülen.