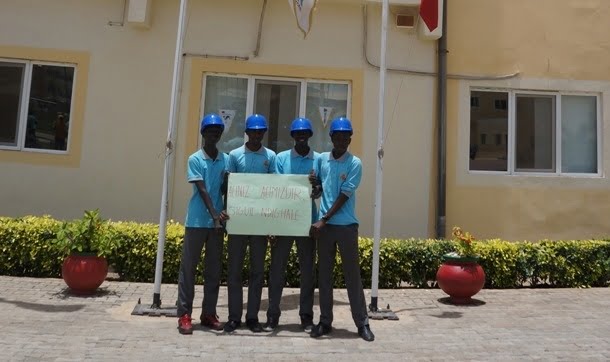 Soma mine pit disaster, which has caused 299 mine workers to have been killed, was commemorated by the students of Yavuz Selim Colleges in Senegal’s capital city of Dakar.

Oğuz Arslan, college principal, made an explanation regarding the mine tragedy and said that they heard the mine disaster with a deep sorrow. “On the day of the accident our Senegalese colleagues, tutors and our students came here to convey their condolences. We share the grief of those who lost their loved ones in de disaster and may God mercy to them,”added Aslan.

Aslan also conveyed his condolences and good wishes to relatives of disaster victims.

Like in Turkey, tragic Soma mine explosion caused great sorrow in Senegal too. There were many emotional moments in a commemoration program which was organized by the education volunteers in Senegal. Wearing miner helmets and placards in their hand that read “Your Pain is our pain” Senegalese students stood a moment of silent those workers who lost their lives in heart-rending tragedy.