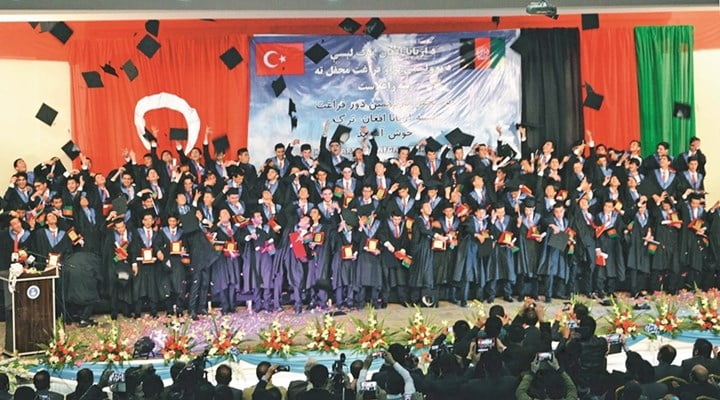 The Afghan education minister pledged to increase the number of Turkish-Afghan schools in Afghanistan, opening at least a school in each province as an educational role model.

The Afghan education minister pledged to increase the number of Turkish-Afghan schools in Afghanistan, opening at least a school in each province as an educational role model.

The Education Minister’s promise to build schools in different provinces by the state support and to transfer their management to Turkish education volunteers was applauded by the attendees at the graduation ceremony where besides Education Minister Nang, Afghan-Turkish Çağ Educational Institutions (ATCE) Chairman Numan Erdoğan, high level MPs, bureaucrats, and students’ parents attended.

New schools will be opened by government support

Afghanistan education minister Asif Nang emphasized the contribution which schools established by Turkish entrepreneurs have made to peace and social cohesion in Afghanistan, saying that the generation who will secure the future of country graduates from Turkish schools. “If we consider all the unrest in this war-torn country, Turkish schools educated a generation who will save the country from this chaos,” he noted.

And the Education Minister promised to support the expansion of schools in other part of country where there are no Turkish schools yet. He added that Afghan officials would like to contribute more support to Turkish-Afghan Schools.

“Turks supported Afghan with education in the hardest times”

Talking about the destructive impact of the war on the Afghan education system, Afghanistan deputy Education Minister Ghulam Jilani Humayun thanked Turkish education volunteers to support the country with education in hard times. “In very difficult times, while no foreigners dared to come Afghanistan, the Turks came and supported us on educating our children,” he said.

Erdoğan reminded that 30% of graduated students further their education in 42 other countries abroad.

Turkish schools that are established by educational volunteers – affiliated with the faith-based Hizmet movement, inspired by teachings of Turkish scholar Fethullah Gülen – across the world receive great appreciation in each country they operate with more than 2,000 educational establishments in more than 140 countries around the world.