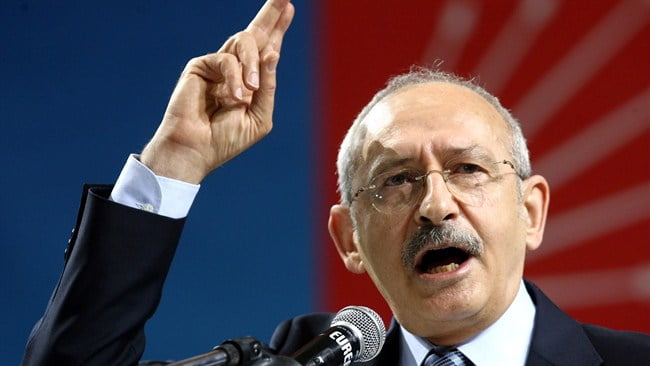 “In democracies, no witch hunt is acceptable. In democracies, there is a concept called the rule of law,” the CHP leader said, responding to reporters’ questions following the party’s parliamentary group meeting on Tuesday.

At the 22nd Consultation and Assessment Meeting of the ruling Justice and Development Party (AK Party) on Sunday, Erdoğan said, “If reassigning individuals who betray this country is called a witch hunt, then yes, we will carry out this witch hunt.”

Likening what has been going on in Turkey following the graft probe in which four then-Cabinet ministers were also involved to the McCarthy period in the US in the 1950s, the CHP leader said: “If anybody is guilty, then you provide evidence [for his guilt] and take him before law. It is not proper to think that ‘I can do whatever I like, put whomever I like into jail’.”

Following the graft probe that became public on Dec. 17 of last year, the government carried out a massive purge in the police force and the judiciary, maintaining that the Hizmet movement, which is a grassroots movement based on voluntary participation to spread interfaith dialogue and tolerance, with a particular emphasis on education, is behind the probe. The government sees the probe as a plot against it.

At his party’s group meeting in Parliament, the CHP leader accused Erdoğan, whom he described as a would-be dictator, of trying to politically exploit the nonexistent threat of a coup d’état to cover up the fact that the prime minister is involved in corruption.

“He [the prime minister] should not exploit the paranoia of a coup d’état; there is no possibility of a coup d’état taking place. It is you who has inflicted a coup d’état on people’s money,” Kılıçdaroğlu said, referring to the graft probe, at his party’s parliamentary group meeting on Tuesday.

In reference to the corruption scandal, the CHP leader stressed that the CHP would call the government to account for every penny illegally pocketed.

“What in the world were those safety boxes doing in the bedrooms of your son and of [then] Cabinet ministers? You will be called to account for that,” Kılıçdaroğlu said.

Noting that a statesman should not rule with hatred, Kılıçdaroğlu said: “Societies that were ruled with anger had to pay a heavy price. If you behave in anger, then you not only put yourself in danger, but also the whole society. A politician should carefully listen to all criticism and take a lesson [from that]. If you act like that, then you can become a statesman.”

The CHP leader’s criticism refers to Erdoğan’s excessive verbal reaction against Metin Feyzioğlu, the chairman of the Turkish Bar Association (TBB) who made a long speech critical of Erdoğan at a meeting held to mark the 146th anniversary of the establishment of the Council of State last weekend in Ankara.

Failing to tolerate criticism by the TBB head, Erdoğan furiously stood up when Feyzioğlu was about to complete his speech and interrupted him. In a severe tone, the prime minister shouted out that Feyzioğlu’s speech was politically motivated and full of untruths.

Kılıçdaroğlu also criticized the prime minister for being impolite, noting that Erdoğan — who did not before the meeting at the Council of State stand up to shake hands with him — got up to shake hands with Necdet Özel, the chief of the General Staff. “Whether you like a person or not, you must respect everybody. You might stand at attention before somebody, but you cannot tolerate criticism,” the CHP leader said.

The Bergsonian philosophy had been a sanctuary for our intellectuals who used it to dispense with the “despair and darkness” in the face of the psychology of defeat stemming from the fall of the Ottoman Empire and drive the spiritual and psychological revival during the War of Independence.

A conference was held in London on Oct. 25-27 to discuss contributions of the Gülen movement, led by Fethullah Gülen. This conference was launched at the House of Lords and was attended by several members of parliament, lords, baronesses, newspaper editors, academics, dignitaries and high-ranking civil servants.

A conference titled “Muslims between Tradition and Modernity: The Gulen Movement as a Bridge between Cultures” was held at Potsdam University in Berlin. The respond to the question about “Ikhlas” This is been commented on this concept by Muslims an every century. But when Fethullah Gulen focuses on Ikhlas, there are two ideas are always […]