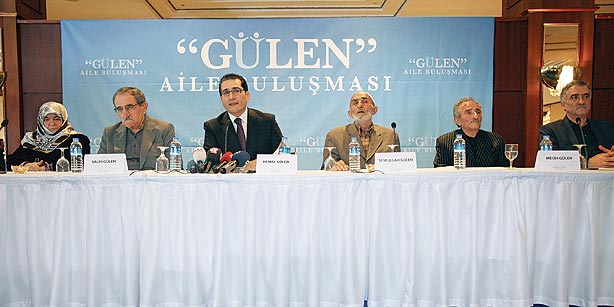 Speaking at a press conference in the Polat Rönesans Hotel in the eastern province of Erzurum, Gülen’s home province, on Sunday, Kemal Gülen, the Islamic scholar’s nephew and a news anchorman with the STV channel, pointed to an ongoing defamation campaign against Gülen and the Hizmet movement inspired by him.

“We have so far remained silent about the heinous attacks and slander against Gülen,” said the news presenter, “but we can no longer turn a blind eye to the defamation campaign aiming to discredit the Islamic scholar and the Hizmet movement, a faith-based social movement.”

The rare gathering brought Gülen’s relatives together to review family matters and the latest developments in the country’s political landscape, which has been shaken by a graft scandal that has since encircled Prime Minister Recep Tayyip Erdoğan’s government.

While the scandal has caused a crescendo of calls for Erdoğan to resign in the face of his alleged involvement in bribery and misuse of public funds, the government has portrayed the sweeping corruption investigation as a plot to unseat the prime minister and has launched a fierce campaign against the Hizmet movement and Gülen, accusing him of being behind the corruption cases.

These accusations have been firmly rejected, however, by Gülen and the Hizmet movement. Yet again, Erdoğan, as in December of last year, when the anti-corruption operation broke, has failed to produce any evidence to prove his claims. Calling such allegations spurious and wholly unsupported, Kemal Gülen also pointed to government efforts to derail the ongoing corruption investigation.

Kemal Gülen said they are waiting to see what, beyond verbal insults and slander, the government will bring to bear against the movement and Islamic scholar, given the mounting threats of action. Erdoğan has brought his bellicose rhetoric, which includes slander, insults and harsh language, to an unprecedented level in party rallies ahead of the critical local polls, which, in the eyes of opposition parties and critics, are seen as a confidence test of Erdoğan’s long tenure in Turkish politics.

Erdoğan himself has described the local elections as a war of national liberation to free the country from dependency on foreign powers.

“They are delivering unspeakable insults such as ‘fake prophet,’ ‘blood-sucking vampire,’ ‘fake scholar,’ ‘head of a terrorist organization’ and so on against Gülen,” said Kemal Gülen, adding, “The most disturbing and frustrating thing for us is hearing such insults from those who present themselves as the champions of democracy and tolerance.”

In addition to the dozens of insults directed towards Gülen from government circles, the much-circulated “fake prophet” remark has stirred resentment among his family members, who say Gülen has devoted his whole life to promoting the Prophet Mohammed and that the remark is nothing but ridiculous. “We learned to love our Prophet Mohammad through what we learned from the Islamic scholar. He made us love our prophet. Such insults implying that we treat Gülen as a prophet are utter nonsense,” said Kemal Gülen.

Slamming government officials and Erdoğan’s close associates for their alleged involvement in corruption, tender-rigging and bribery, Kemal Gülen emphasized that none of Gülen’s relatives have attempted to exploit the Islamic scholar’s worldwide influence to make a fortune for themselves. Still, he said, Gülen’s relatives live in modest conditions and have no desire for an extravagant life.

The return of Gülen to Turkey, who lives in Pennsylvania in self-imposed exile, is a thorny issue, given how some might react to his reappearance in the country. “It’s up to you, Mr. Gülen,” said his nephew, “to decide when you will return. But we want you to know that you will have your relatives’ full support if you decide to come back.”

Erdoğan had once invited the Islamic scholar to the country. But now Gülen’s followers consider the prime minister’s call insincere, given his belligerent rhetoric and hostility towards the Islamic scholar since the breaking of the corruption investigation. However, some members of the Hizmet movement and critics of the government say Erdoğan’s hostility had been building long before the graft probe emerged.