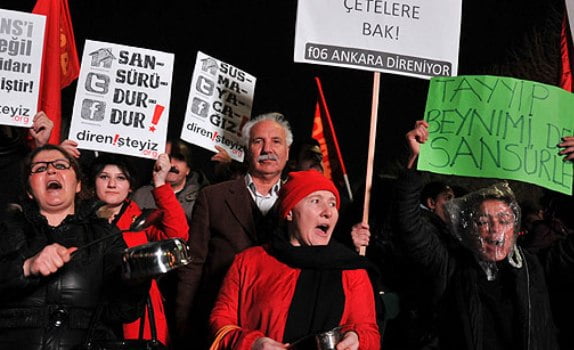 “I am very sorry, please forgive me, but they are taking to the streets and immorally saying, ‘Don’t touch these indecent visuals’ and the parallel structure is backing them,” Erdoğan yelled during a public rally on Sunday celebrating the groundbreaking of a metro line between Mecidiyeköy and Mahmutbey, two districts in İstanbul.

Erdoğan defended the bill, which gives the state greater authority in controlling Internet content, saying the government isn’t introducing restrictions to the Internet, but is actually moving to expand the sphere of freedom. “We are only introducing regulations against publications that violate personal rights,” he said.

He recalled a video tape displaying Deniz Baykal, former chairperson of the main opposition Republican People’s Party (CHP), with a woman, saying that he had moved swiftly to prevent dissemination of the visuals without waiting for a court order. Erdoğan, however, used discursive strategies in discussing the content of the video during his election campaigns in 2011, accusing Baykal of immorality and adultery. Erdoğan said the videotape was released by a “parallel state,” a term he uses to describe state officials close to the Hizmet movement, a faith-based voluntary organization spreading religious tolerance and interfaith dialogue in the world. In his resignation speech, however, Baykal denied that Hizmet had anything to do with the videotape.

Erdoğan said the parallel structure within the state has taken steps against “our entrepreneurs and businessmen,” referring to a government graft probe that became public on Dec. 17 of last year and implicated a number of contractors who had undertaken colossal government construction projects, as well as the sons of three ministers. Media outlets ran stories based on leaked voice recordings and the documents of a second probe, which has been stalled since Dec. 25, 2014, when the government started removing or reassigning thousands of police officers and police chiefs as well as the prosecutors carrying out the investigation. The press has since reported that the depths of corruption within the government is actually a lot bigger than initially assumed.

He accused this parallel structure of being in an alliance with opposition parties, the powerful Turkish Industrialists and Businessmen’s Association (TÜSİAD) and the critical media in a plot against his government. Erdoğan claims that this coalition is an extension of the same organization that toppled the government in 1960 and executed former Prime Minister Adnan Menderes by hanging. He said those who are critical of his government, including the opposition, which is desperate to coming to power through the ballot boxes, are exactly the same people who instigated the Gezi protests last summer to weaken his government.

“We have been productive and they are slinging stones at us. They are only cursing us. We are trying to make Turkey more powerful and they are trying to pull it down,” Erdoğan quipped. Erdoğan further claimed that the Dec. 17 investigations also targeted the economy, saying that the perpetrators of (as he calls it) a coup against his power aim to sink the public bank Halkbank and the National Intelligence Agency (MİT).

As part of the Dec. 17 investigation, prosecutors claim that Reza Zarrab, an Iranian businessmen, allegedly used Halkbank as a transfer point for gold to Iran in return for oil, as a way to circumvent international sanctions. Zarrab, currently under arrest, has also been accused of bribing government officials to get his scheme operating.

Erdoğan refuted these claims in his speech during the metro groundbreaking ceremony and provided those present with a definition of the word bribe. He said a bribe can only occur between a civil servant and a civilian person and, without elaborating on the definition any further, added that his government has been an opponent of corruption since his party came to power 11 years ago. He proved his claim by mentioning the economic achievements of the government.

Erdoğan, who had labeled TÜSİAD as traitor a couple of weeks ago when it warned the government that foreign investors are wary of political tensions, continued criticizing the business organization. He said TÜSİAD should mind it own business and hinted that they may face rigorous audits otherwise.