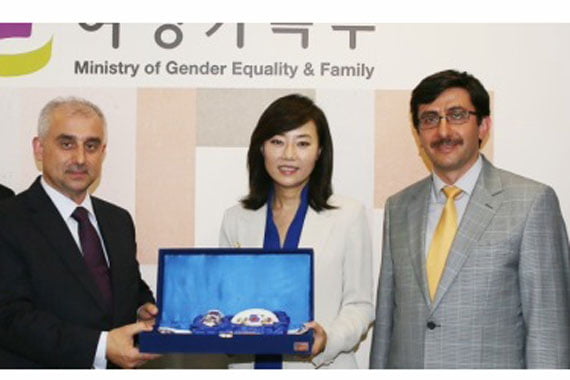 President of the Journalists and Writers Foundation (GYV) Mustafa Yeşil traveled to South Korea to receive the Manhae Peace Prize on behalf of GYV Honarary President Fethullah Gülen. While in Seoul, Yeşil also paid an official visit to the Minister of Gender Equality and Family of the Republic of Korea Yoon-Sun Cho who offered Yeşil her congratulations and noted she was glad that a prominent figure from Turkey has been awarded this significant prize.

GYV President outlined the Foundation’s Peace Projects supported by the United Nations Economic and Social Council, asked if the Minister could possibly contribute to the project, too, and requested her advice on Korea’s leading peace activists to join an international jury to be established. Cho showed an interest in the project and assured Yeşil that she would like to provide as much help as possible.

Moreover, GYV President invited the Korean Minister to the Istanbul Summit – a project aiming at voicing women’s perspectives on the UN Millenium Development Goals. Cho was pleased to receive the invitation. It was specified that updates on this project could be obtained via the Istanbul Cultural Centre based in Seoul – a supporting organization to the Foundation.

Mustafa Yeşil noted that GYV maintains constant contacts with 5 women’s unions which represent up to 250 women’s associations, offered the Foundation’s assitance in establishing a connection between the associations in Turkey and those in Korea in case the latter engage in international projects, and underlined the possibility of mutual cooperation, to which Yoon-Sun Cho replied that she would indeed be glad if such cooperation could be established.

Cho recounted how in 2010, while Member of the National Assembly, she had participated in a program organized by the Istanbul Cultural Center and traveled to Turkey, where she was most impressed by her meeting with the Korean War veterans, whose grandchildren expressed a desire to study in Korea and asked for reference letters. She discussed this matter with the former Prime Minister and the former Chairman of the Joint Chiefs of Staff of the Republic of Korea, both of whom also visited Turkey as part of the same program, and, upon return home, took part in launching a foundation to provide scholarships for the first-degree relatives of the Korean War veterans.

Cho added that she sincerely supported Turkey in the 2002 World Cup. During the meeting both sides voiced their opinion that Korea and Turkey are “brother countries”, and that there are not any other two countries so close to each other at heart, despite being so far away from each other geographically.

Peace Projects is a grant program initiated by the Journalists and Writers Foundation which recognizes the critical importance of supporting attempts at peacebuilding and conflict resolution. This program encourages the development of creative and innovative projects which aim at managing and preventing the recurring and newly appearing conflicts around the world; promoting peaceful coexistence through dialogue; fostering pluralism, good governance, freedom of belief; advancing justice, reconciliation, social and economic development, respect for human rights and gender equality.