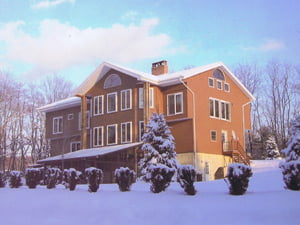 The Gülen movement refers to a cluster of religious, educational and social organizations founded and inspired by Fethullah Gülen, a Turkish Islamic scholar, author and speaker now in his late 60s. The movement strives to give faithful Muslims the secular education they need to thrive in the modern world. At the same time, it also emphasizes the importance of traditional religious teachings. To this end, the movement has inspired the creation of a worldwide network of schools and other centers of learning that focus on secular subjects in the classroom but also offer extracurricular programs that emphasize religious themes.

By some estimates, there are now more than 1,000 Gülen-inspired schools and centers in more than 100 countries around the world.  In Germany, the European country with the strongest Gülen presence, there are at least a dozen of these schools and more than 150 smaller educational and cultural centers. While open to students of all backgrounds, Gülen-inspired schools in Europe typically cater to Turkish immigrants and their offspring.  Many of the schools charge tuition, but it is generally low because the schools are subsidized by wealthy supporters of Fethullah Gülen.

The Gülen movement lacks a centralized organizational structure, describing itself as a global cemaat, or “community,” whose primary mission is to reinforce the idea that Muslims can be both modern and faithful to Islamic traditions. It is perhaps best understood as an extensive and well-coordinated network of supporters, many of whom make sizeable donations to Gülen-linked foundations.  The group’s priorities are set by Gülen, who entrusts a relatively small group of deputies to carry out his broad plans.

At the local level, the movement’s activities are coordinated by a network of “elder brothers,” who preside over the various centers affiliated with the movement.  Additionally, the movement sponsors a number of Turkish business associations in Western Europe, which play an important role in networking and facilitating communications among Gülen’s followers.

Gülen himself has been living in the United States for the past decade. He came to the U.S. for medical treatment in 1999 at a time when Turkish religious groups were under mounting pressure from the country’s secular military establishment. He decided to stay in the U.S. and eventually was granted permanent residency status. He now lives in a secluded compound in the Pocono Mountains in eastern Pennsylvania.

Origins of the Gülen Movement
The movement emerged in Turkey in the late 1960s when Fethullah Gülen began organizing reading groups in the homes of his closest followers in the western port city of Izmir. After establishing a presence throughout Turkey during the 1970s and ’80s, Gülen and his followers expanded their educational operations internationally, first to the Muslim-majority regions of what was then the Soviet Union and then, in the mid-1990s, to Western Europe.

The most direct intellectual inspiration for Gülen’s work came from the early 20th-century Turkish religious reformer Said Nursi, who combined aspects of traditional Islamic scholarship with modern scientific knowledge in the pursuit of social and political reform in and outside of Turkey.

Like Nursi, Gülen argues that a better understanding of the secular world deepens religious faith. Moreover, he believes that promoting Islam using traditional religious institutions, such as mosques and madrasas (religious schools), is unlikely to work in a modern world in which success and social mobility are tied to the mastery of scientific and technical skills. Instead, he calls for an educational program that combines the rigorous study of modern, secular subjects with an extracurricular focus on spirituality and conservative religious values.

Educational Agenda
The Gülen network has pursued its educational agenda aggressively, building hundreds of private schools around the world. The first Gülen school in Western Europe was established in Stuttgart, Germany, in 1995. By 2009, there were more than 50 such schools in Europe, primarily in Germany.

Followers of the movement are often quick to emphasize that these schools are not “Gülen schools,” in the sense of being under the direct control of Fethullah Gülen or the various branches of his movement. Rather, they prefer to speak of them as “Gülen-inspired” educational institutions. Most of the funding for the schools comes from Turkish business leaders who follow Gülen’s teachings.

Classroom instruction in these schools does not include religious topics and generally follows the national curriculum of the countries in which the schools are located. The primary language of instruction is usually English or the language of the host country. Almost without exception, however, the teachers in the schools are affiliated with the Gülen movement. And while religion does not have a place in the classroom, the movement operates a range of other facilities, such as dormitories and community centers, that students are encouraged to use and where the focus becomes more overtly religious.

In places such as Western Europe and North America, where public education standards are higher, the influence of the schools tends to be confined to the relatively small Turkish communities in those countries. But in countries such as Kazakhstan, Azerbaijan and Macedonia, Gülen-inspired schools have proven popular even with secular families, largely because of their reputation for providing students with a quality education.

Recently, the movement has broadened its educational efforts beyond the elementary and secondary-school level. In the mid-1990s, for instance, supporters of the movement founded Fatih University in Istanbul, giving the movement a foothold in the world of higher education.

Beyond Education
Fethullah Gülen’s followers are also active in other spheres, such as the media. This is especially true in Turkey, where his supporters own Zaman, the country’s largest-circulation daily newspaper, as well as an international news agency, a number of television stations, and various periodicals and websites. These media outlets vary in the extent to which they directly serve the movement’s goals, with some merely acting as platforms for opinions and viewpoints that resonate broadly with Gülen’s vision. For instance, a special European edition of Zaman targets the Turkish diaspora in Europe and provides details of activities and events sponsored by Gülen-affiliated organizations.

To complement its media outreach and educational work in Europe, the movement also organizes a range of promotional activities, such as conferences, lectures, seminars, language courses, music instruction and trips abroad. These are often held under the auspices of intercultural foundations affiliated with the movement, such as the Dialogue Society in London and the Forum Für Interkulturellen Dialog (Forum for Intercultural Dialogue) in Berlin.

Guiding Principles
The Gülen movement generally shies away from building ties with other Muslim organizations in the European countries where it has a presence. At one level, this self-segregation reflects the distinctively Turkish character of the movement. Indeed, outside of Turkey the movement appeals primarily to ethnic Turks. It is therefore not surprising that the movement’s influence and impact in Western Europe are highest in countries with sizeable Turkish communities, such as Germany and the Netherlands. To some extent, the Gülen movement also keeps its distance from other Turkish groups in Europe. In Germany, for example, the movement pursues a middle ground between two other major Turkish Islamic groups – the Turkish-Islamic Union for Religious Affairs (known by the Turkish acronym DITIB), an organization closely tied to the secular Turkish government, and the Islamist-leaning Millî Görüş organization.

The Gülen movement’s reluctance to join forces with other Muslim groups is not solely a case of self-segregation, however. It also reflects the movement’s commitment to the assimilation of Muslims into European society. While some Muslim groups encourage members and followers to emphasize their Islamic identity, the Gülen movement teaches that Muslims should work with and within the majority society. For example, Gülen’s followers in Europe and North America frequently try to build partnerships with non-Muslim businesses, universities and other secular institutions to sponsor conferences and similar activities.

Growing Visibility and Scrutiny
Some in the West have characterized the Gülen movement as representing a distinct model of Islam that successfully synthesizes modernity and religion.  But others see the movement as a cause for concern.

In his early writings and public remarks, Fethullah Gülen at times defined his goal as cultivating a generation of well-educated elites in Turkey – cosmopolitan but also grounded in Islamic faith – that would be comfortable with allowing religion a more prominent place in Turkish society. For this reason, some of his critics have accused him of having a hidden political agenda and engaging in a gradualist strategy to undermine the secular foundations of the Turkish state.  Possibly because of these concerns, Gülen has always been careful to try to emphasize his agreement with the secular, modernizing vision of Mustapha Kemal Ataturk, founder of the Turkish Republic.  In this way, he has sought to separate himself and his movement from more radical Muslim groups in Turkey.

The Gülen movement has been criticized in the West from time to time, even by some who might otherwise laud its goals, because it tends to be guarded in providing specific information about its operations or allowing outsiders access to some of its facilities. As a result of this perceived lack of transparency, as well as lingering concerns that Gülen has a secret political agenda, some have come to view the movement and its work with varying degrees of suspicion.

To some extent, the polarized views concerning Fethullah Gülen and his followers stem from the fact that the movement does not easily fit into existing categories of religious organizations in the Muslim world. The movement’s rapid expansion is also a factor in the increased scrutiny: The larger the movement grows, the more scrutiny it attracts, particularly in the West. Partially in response to this new attention, the usually reclusive Gülen recently granted interviews to three major U.S. newspapers, The Wall Street Journal, The New York Times and USA Today.

For More Information
Various perspectives on the Gülen movement can be found in:

For information on Gülen-inspired schools, see:

Original anaysis may be found at http://pewforum.org/Muslim/Muslim-Networks-and-Movements-in-Western-Europe-Gulen-Movement.aspx