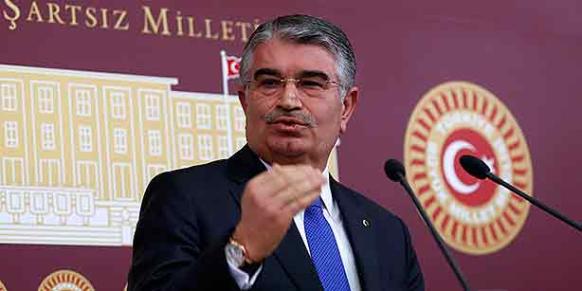 Şahin, a long-time confidant of President Recep Tayyip Erdoğan and one of the founders of the ruling Justice and Development Party (AK Party), revealed on June 20 that he had received a large number of documents pertaining to an alleged plan, called the “Action Plan,” drafted by the Interior Ministry that ordered intelligence officers to attack those who feel sympathy for, or are affiliated with, the Hizmet movement — a civic group inspired by Islamic scholar Fethullah Gülen.

The plan also included gathering evidence to launch a police operation against Hizmet, which is known as a peaceful group that seeks to preserve the Turkish nation’s faith, scientific and cultural values, while also promoting these values abroad so as to enhance Turkey’s prestige.

The recent government crackdown on media outlets seen as sympathetic to Gülen’s views was initiated by the government after a letter of complaint from a member of the radical group called Tahşiyeciler, which is openly supportive of al-Qaeda ideology. In fact, deputy prime Minister and government spokesperson Bülent Arınç inadvertently admitted that the police who conducted the operation against media outlets called those who are accused of being members of Tahşiyeciler to ask if they wished to make a complaint against Fethullah Gülen. After then securing these complaints, they launched the operation.

The 1st İstanbul Penal Court of Peace last week issued an arrest warrant for Gülen on charges of leading an armed terrorist organization, an accusation for which the court failed to provide any evidence. The same charges are also leveled against prominent journalists who were detained on Dec.14 based on news articles and fictional TV series.

As part of an intensified government campaign to crack down on critical and independent media outlets in Turkey, Ekrem Dumanlı, the editor-in-chief of the nation’s best-selling daily, has been charged with “establishing and administrating an armed organization” under the anti-terrorism law based on two op-ed pieces and one article published in his newspaper five years ago. He was detained for four days after which he was released by the court pending trial.

Hidayet Karaca, the general manager of Turkey’s leading national TV station, Samanyolu, was also charged under the anti-terrorism law. He was arrested by the court and put in jail pending trial.

The prosecutor who is in charge of the investigation asked the court to reverse its decision to free Dumanlı, a move that came only several hours after a mysterious Twitter account, Fuat Avni, wrote that the re-arrest of Dumanlı was ordered directly by President Erdoğan.

The whistleblower, who professes to be from the inner circle of Erdoğan’s administration, wrote on Wednesday night that Erdoğan had ordered his team to arrest Dumanlı “no matter what.”

He asserted that the detention of Dumanlı will be possible following a letter from Trabzon, where a man with a criminal record will say that Dumanlı asked him to plant bombs and ammunition. Avni said the man, Melih Gürler, has seen the inside of many prisons in the country and that he had been charged with robbery, extortion, sexual assault and false testimony in the past. Gürler is being used by the Turkish intelligence agency, Avni asserted.

The whistleblower’s account is in line with the secret plot revealed by former Interior Minister Şahin in June, who said the government wanted to investigate Hizmet members to determine if they possessed guns and if it would be possible for its members to stage a coup against the AK Party government. When there was no evidence to back-up such claims, apparently the government decided to fabricate evidence based on secret testimonies.

Şahin also underlined that the government “Action Plan” recommended determining if those who were the subjects of criminal investigations over the last 10 years would testify against the Hizmet movement and suggests that former members of the movement may be questioned and protected by the state witness protection system.

In September it was revealed that Ankara Public Prosecutor Serdar Coşkun, who is investigating the Hizmet movement, has listed Varol Bülent Aral — a suspect in the 2007 murders of three Bible publishers in Malatya — as an anonymous witness to support his case against the movement.

In footage that will be used as evidence in the indictment, Aral is heard saying that the “parallel structure” — a derogatory name applied to Hizmet by Erdoğan — hired him as an agent and helped him infiltrate the left-wing armed organization, the Revolutionary People’s Liberation Party/Front (DHKP/C).

However, an official statement sent by the Intelligence Unit of the National Police Department to the Malatya 3rd High Criminal Court, which heard the Zirve murder trial, clearly shows that Aral is an agent who works for the National Intelligence Organization (MİT).

The Malatya Police Department said that Aral was arrested in 1995 for his involvement with the DHKP/C, but was later released after MİT officials wrote to the department informing them that Aral was working as an informant for MİT.

Some individuals who have been tried as part of the Ergenekon trial, in which suspects were accused of planning to overthrow the AK Party government, are also testifying anonymously to support Coşkun’s case.

Pro-government newspapers and media that are known to be directly controlled by the government have been publishing stories that seem to be part of the government’s attempts to associate Hizmet with several assassinations and attacks in the past. These include a bomb attack on the Council of State in 2006, the murder of businessman Üzeyir Garih in 2001, the assassination of journalist Hrant Dink in 2007, the death of Father Santoro, a Catholic priest in Trabzon, in 2007 and the Zirve murders, where three Christians were brutally killed in 2007.