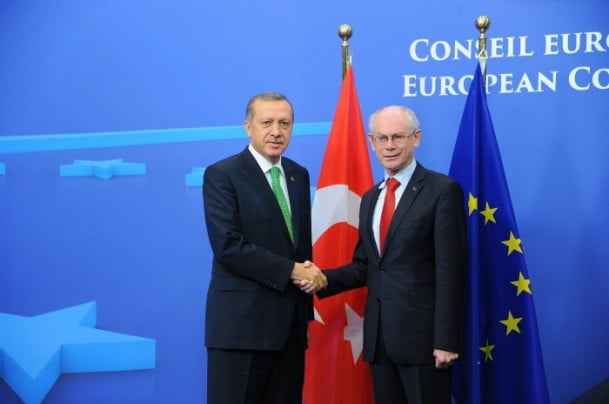 On Jan. 21, Erdoğan made his first visit to Brussels in five years to hold talks with EU officials, including the heads of the European Parliament’s political groups.

Following his meetings with EU officials in Brussels, Erdoğan participated in a symposium on the 50th anniversary of an agreement to send Turkish workers to Germany and a meeting of the All Industrialists and Businessmen’s Association (TÜMSİAD), where he returned to his domestic rhetoric, reiterating that he will not allow a “parallel state” in Turkey.

In his speech at TÜMSİAD, he claimed that the graft and bribery investigation that has recently shaken his government aim to stifle investment in Turkey. “During our meetings in Brussels, we gave our colleagues the low-down on the Dec. 17 attacks [graft probe],” he said.

The corruption investigation became public on Dec. 17 following a wave of detentions. In what was widely perceived as a government attempt to stymie the probe, hundreds of police officers have since been reassigned or demoted, and the government has introduced a controversial bill to restructure the Supreme Board of Judges and Prosecutors (HSYK), the body in charge of appointing senior judges and prosecutors.

Erdoğan added that he told his contacts in Brussels that the graft probe is unrelated to corruption and is an attempt to sabotage democracy, the economy, Turkey’s foreign policy and the settlement process in particular.

News website EUobserver also reported that the prime minister struck a very different tone in Brussels in his comments on the graft probe.

“He refrained from the kind of rhetoric he uses at home — that the corruption allegations are a plot by Fethullah Gulen, an Islamic guru living in the US, and the US intelligence agency, the CIA, to weaken Turkey,” EUobserver, which specializes in EU affairs, said on Tuesday.

“But he alluded to the conspiracy theory, saying ‘some groups’ are trying to spread ‘negative approaches toward our country’,” EUobserver continued.

Speaking to reporters at Ankara’s Esenboğa Airport before his departure for Brussels, Erdoğan stuck to his usual talking points, portraying the sweeping corruption investigation that has encircled his government as a plot to weaken his rule.

Resurrecting a well-worn script, Erdoğan accused critical media outlets and “some groups” of waging a campaign to manipulate international opinion about the graft probe.

He vowed to eliminate “disinformation and misunderstanding abroad” with objective analysis and “the truth” during his visit.