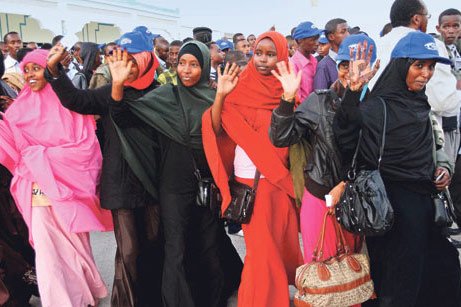 Turkish charity organization Kimse Yok Mu on Wednesday gave 309 Somalis the opportunity to receive a quality education in Turkey, according to a news report from the Cihan news agency. The students, along with Kimse Yok Mu officials and Somali Education Minister Ahmet Eydid İbrahim, arrived at İstanbul Atatürk Airport early Wednesday morning, where they were welcomed by more Kimse Yok Mu representatives.

The students, who Özkişi said were overjoyed when they arrived, will be able to significantly contribute to the development of their country when they complete their education.

According to Özkişi, 49 Somali students were previously brought to Turkey. Prime Minister Recep Tayyip Erdoğan’s goal is to provide 500 students with an education in Turkey, Özkişi said.

One Somali student, Nesra El Hüseyin, said she is very happy to be in Turkey. After completing her studies, El Hüseyin said that she wants to be a doctor. She will move back to Somalia, where she said she wants to serve her people. Other students also said that they were excited to be studying in Turkey.

The 309 students, who hail from seven cities in Somalia, are high school and university-bound.

The student exchange program is just one part of a massive aid campaign undertaken by Turkey in response to East Africa’s worst drought in 60 years. Turkey’s relief efforts so far have included donating TL 500 million in aid to Somalia and distributing food to 12 million people in Somalia, Kenya, Ethiopia and Djibouti. The UN’s refugee agency recently declared that the east African drought is currently the “worst humanitarian disaster” in the world, and has urged other international actors to pledge additional assistance.