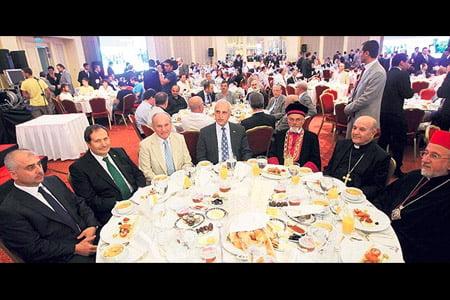 Many prominent figures sat around an iftar table together on Wednesday night at an event held by the Journalists and Writers Foundation. (Photo: Today's Zaman)

Many distinguished figures, including Turkey’s spiritual leaders, politicians, artists, diplomats, businessmen and journalists came together at the same iftar (fast-breaking dinner) table in İstanbul’s Conrad Hotel on Wednesday night at an event held by the Journalists and Writers Foundation (GYV).

GYV Honorary President Fethullah Gülen greeted the guests with a message he had written especially for the evening. Gülen expressed his regret at not being able to attend the event and said he hoped the holy month of Ramadan would bring prosperity to the whole of humanity. “Regardless of our beliefs, we are the descendants of those who maintained their own distinctive lives and had respect and compassion for others and knew to share their happiness. However, it is with regret that we can observe that the arbitrary flow of events at such a high speed makes it difficult to correctly understand others and has led to an erosion of the ethical and moral values I mentioned above.

I think that national and international peace can be attained by reviving these manners and values,” Gülen said in his message.

He went on to say that those who adopt these ethical values and good manners love and embrace everybody, ignore the mistakes of others in a magnanimous manner, forgive others even when they lose their tempers, get on well with even the most bad-tempered people and smile at everyone, including those who bear a grudge against them.

“They are not egocentric, arrogant. They are humble and magnanimous even when they have achieved great success,” Gülen said and further stated that he believes in a better future with loving, caring, humane and compassionate human beings.

Delivering the opening speech at the event, GYV Chairman Mustafa Yeşil said the iftar table of the GYV gathered people from different segments of Turkish society.

“Is there any platform other than this iftar table that has brought so many different people together? I do not think so. I hope these iftars, which have been held for 18 years by our foundation, will make history by bringing different people together and this will happen thanks to your efforts and contributions,” Yeşil further stated in his address to the guests.

Also speaking at the event, Dumanlı said GYV’s iftar dinners are reconciliation platforms where people from different parts of Turkey with different beliefs and ethnic identities come together and added that they have contributed a lot to the social peace.

“Nothing can exist without love and this foundation is striving to spread love among people. Union makes strength and I hope this union will prevail everywhere in the world,” Governor Mutlu said in his address to guests at the iftar.

Limak Holding Chairman and former Fenerbahçe Vice President Özdemir also praised the GYV’s event and expressed his happiness at being together with people from various quarters, adding that it was the third time he had attended GYV’s iftar.

Columnist Ali Bulaç who was also in attendance at the event, said he had come from Ankara to attend the iftar. GYV’s iftar is significant as it promotes tolerance, dialogue and mutual understanding, Bulaç noted.

Highlighting the tolerant nature of Turkish people towards others, Topbaş said that Turkish people with different ethnic and religious backgrounds are able to come together at the same table.

Also speaking at the event, journalist Mete Çubukçu said GYV’s iftar brought together people from different segments of society. “GYV gathers fasting and non-fasting people, who have the opportunity to eat and converse at the same time in a peaceful atmosphere,” Çubukçu went on to say.

Turkey has drifted apart over the past five months and there has been a change, polarization and disintegration of society, said columnist Emre Uslu during the event. “There was a need for something to say ‘stop’ to this fragmentation and it was ultimately the GYV that took on the task,” Uslu added.

The GYV was founded in 1994, and the mission and work of the foundation are inspired by GYV Honorary President Gülen, known for his teachings of hizmet (service), tolerance and dialogue. The Turkish nongovernmental organization shapes its vision of national and global unity through its five independent platforms and research center. These independent platforms each specialize in a different field, contributing to both the GYV’s and Turkey’s intellectual wealth.

Prominent scholar Tariq Ramadan, grandson of the founder of the Muslim Brotherhood, has criticized the Turkish prime minister for seeking more power and urged him to rethink staying in power for a longer time. Ramadan said, Prime Minister Recep Tayyip Erdoğan once told former Egyptian President Hosni Mubarak — that one day he will have to know how to leave — is true for him as well. “[Erdoğan] also needs to get this right.”