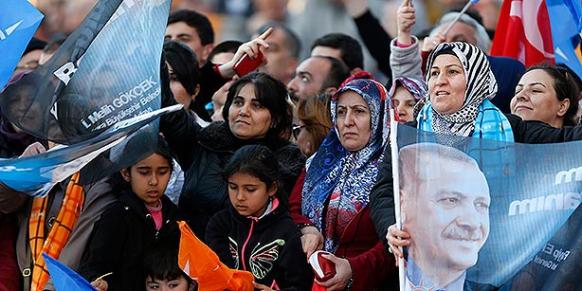 Supporters of Recep Tayyip Erdoğan wave his portraits and Turkish and his ruling Ak Party flags during an election rally in Ankara on March 22, 2014. (Photo: Reuters)

It is not easy for countries like Turkey to internalize democratic norms and principles. First of all, in terms of historical settings and cultural codes, Turkey has never found the solid ground to have a fully fledged democracy. The political elites have paid lip service to democracy and viewed democracy as an “electoral democracy.” As we see today, once the political elites have come to power they have adhered to authoritarian practices and curbed freedom and rule of law with the aim to serve their own interests.

The prevailing nepotism, the lack of a strong civil society, the stigmatization of any opposing voice as a traitor and the hegemony of the monist/Kemalist state philosophy have caused the erosion of democracy in Turkey since the early years of the inception of multi-party politics.

With the rise of identity-based politics, the 1990s witnessed the emergence of Kurds and Islamists as the new actors in the political arena. The 1990s were years of identity-related polarization and turbulence as the leftist-rightist divide relatively lost ground in the political sphere. The rise and demise of the Welfare Party (RP) and the Feb. 28 process — known as the “post-modern coup” — made it crystal clear that the political parties with an Islamist outlook and agenda could not exercise an enduring authority in Turkish politics.

The 1999 elections brought a weak coalition government to power and the 2001 economic crisis pushed the electorate to view the newly founded Justice and Development Party (AKP) as a remedy. Unsurprisingly the AKP has succeeded in sustaining its position since no serious political opposition existed. Since the early 2000s, the political autonomy of the military bureaucracy has diminished by an important degree. The normalization of civil-military relations along with the EU reform packages and the Ergenekon trials all played a key role for the AKP to consolidate its power both in electoral and institutional terms. In addition, the 2010 referendum provided a space of opportunity for the AKP to eliminate the elements in the bureaucracy that posed a threat against the party. In this regard, the restructuring of the high judiciary and the military paved the way for the AKP to sustain its hegemonic position.

For more than two years (except the democratization package introduced in October 2013), the EU reforms have gradually lost ground and the democratic acquisitions have disappeared one by one. With the Dec. 17 and 25, 2013, corruption operations, the AKP government has targeted the Hizmet movement as a “parallel state” and employed almost all measures to put an end to the Hizmet. Indeed, the AKP government has used its struggle against the Hizmet as a mask to draw attention away from corruption. While attacking Hizmet with all state instruments and pro-government media outlets, the AKP government not only demonized Hizmet but it also became engaged in oppressing all critical voices. Today, not only the Hizmet but also democracy and the rule of law are under attack. The imprisonment of the head of the Samanyolu Media Group Hidayet Karaca on Dec. 14 — because of a film plot — can be seen as a stick used to scare all segments of society who are critical of the government. People today think at least twice before posting a tweet on Twitter criticizing the president or the government. Recenty, journalist Sedef Kabaş was interrogated by the police for her critical tweets.

As stated earlier, what Turkey is going through has nothing to do with democracy. The ballot box is never enough for a liberal democracy. Distinguished political scientist Dankwart Rustow proposed four stages of democratization. Rustow argued that the final stage refers to a working democracy wherein people internalize democratic norms and principles. Rustow called this “habituation” and argued that in such countries, people conform to the written and unwritten rules of democracy even when they compete intensely. In contemporary Turkey, the non-democratic measures, tools and discourses should be eliminated first to fully grasp the democracy we need. The ideals of pluralism, the guarantee of individual liberties, the separation of powers, rule of law, press freedom and freedom of speech can only be reached after a thorough purification of non-democratic practices. Without this purification, we can never achieve the democratic habituation we are strongly in need of.