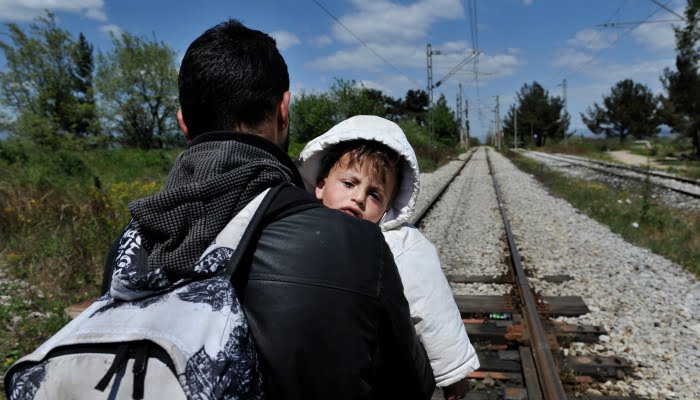 A migrant carries his child as he walks on a railway line at the border post of Idomeni, some 600 km North of Athens, on the border Greece-Macedonia on April 21, 2015. Since Greece bolstered controls along its land border with Turkey along the Evros River, illegal immigrants have turned to the maritime route between Turkey and the Greek islands in the Aegean Sea, notably Lesvos, Samos, Kos and Chios. 2015 started with a major increase in the number of Aegean crossings : 10,445 against 2,863 in the same period of 2014, according to the Greek port police. AFP PHOTO / SAKIS MITROLIDIS / AFP PHOTO / SAKIS MITROLIDIS

A recently published book tells the stories of people who, following a military coup attempt in Turkey on July 15, 2016, were victims of a government-led crackdown carried out under the pretext of an anti-coup fight, the tr724 news website reported.

The book, titled “Umuda Tutunmak” (Clinging to Hope), was written by Mina Leyla and published by Süreyya Publications.

Following the coup attempt, the Turkish government launched a massive crackdown on followers of the Gülen movement as a result of which more than 130,000 people were removed from state jobs while in excess of 30,000 others are still in jail and some 600,000 people have been investigated on allegations of terrorism. In addition, thousands of people had to flee Turkey, mostly illegally, because their passports had been revoked, and many drowned in the Aegean Sea or the Maritsa River while trying to make their way to Europe.

Leyla, who apparently uses a pseudonym, is also one of the people who fled Turkey to save herself from the government-led crackdown.

There are also eight stories in the book of individuals who were affected by the purge. The book has gone on sale in Europe and the US and is available to order online.