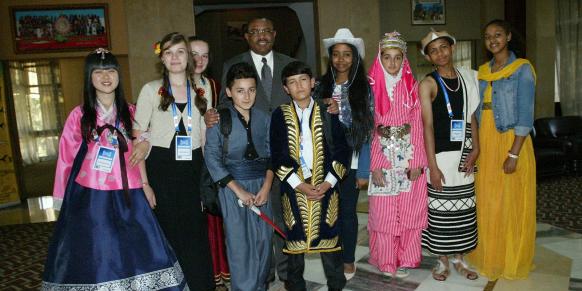 Ethiopian Prime Minister Hailemariam Desalegn has said the Turkish Confederation of Businessmen and Industrialists (TUSKON), one of Turkey’s leading business confederations, has contributed positively to his country’s development over the last 10 years and that it is an honor to work with the organization’s membership.

Speaking at the opening session of the “Ethiopia-Turkey Trade and Investment Forum” late on Friday in Addis Ababa, Desalegn said his government will support all investments to the extent that it is able. “A lot of Turkish companies have become promoters of Ethiopia over the last decade. We want to progress and go much further with a well-structured market. I hope your investments in my country will grow and I would like to express my thanks for the key role TUSKON has played here,” said the prime minister.

Underlining that TUSKON has established a very strong network across the globe and that its members have vast experience in the manufacturing industry among many others, Desalegn said TUSKON members should make themselves feel at home in Ethiopia. He noted that there is political and macroeconomic stability in his country and the fact that there is a young population is a plus for investors as a fresh workforce. Ethiopia is open to foreign investments more than ever before, Desalegn said.

Schools building future for our boys

Desalegn also hailed the Turkish schools operating in Ethiopia, saying that these educational institutions support the Ethiopian policy of building up the quality of the education infrastructure of the country. “On behalf of my state, I offer my thanks to the Turkish schools for having provided better opportunities to Ethiopian students,” he said.

TUSKON President Rızanur Meral also delivered a speech at the meeting to praise the investment environment and potential that exists in Ethiopia for business. Aware of the advantages this country offers, Turkish entrepreneurs were among the early arrivals, he said. “Written agreements are not the most important facilitators of investments in a country. What matters the most is the implementation of the law. Turkish businessmen will get endless support from the Ethiopian government and you will see the same in all ranks of the bureaucracy as well,” he said.

Ethiopia is a burgeoning market that is flourishing rapidly, which means businessmen who fail to tap into the investment opportunities of this country now may regret it dearly later.

The forum took place in the prime ministerial building in Ethiopia’s capital city of Addis Ababa and along with Desalegn, the Ethiopian Minister of Industry Tadese Haile, Deputy Foreign Minister Dewano Kedr, Ethiopia’s Ambassador to Turkey Ayoleve Gobozia, Investment Agency Director Aklilu Woldem, TUSKON President Meral and TUSKON Secretary-General Mustafa Günay were also among the participants. About 800 businessmen from both countries gathered in the busy forum and discussed ways they might cooperate with each other.

Trade volume between the countries has risen more than 400 percent in the last decade from $110 million to $550 million in 2013.