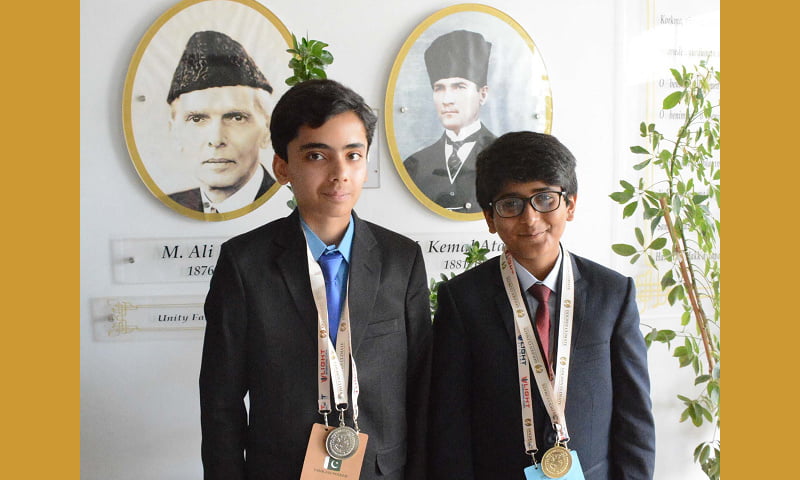 The most deprived province of Pakistan, Balochistan, is a land of talented people who have always strived to make the country proud whether it is sports, education or any other field.

Given a proper platform and opportunities, the talented youth can present a positive image of Pakistan internationally.

Two students Mukarram Fatah and Yasir Jan hailing from the most backward areas of the province – Jaffarabad and Chagai, respectively – have won silver and gold medals in Kenya for their projects.

They participated in the Global Climate Change Olympiad held in April this year in Nairobi, Kenya. Both of them clinched medals in different categories, making Balochistan proud.

From Chagai, 16-year-old Yasir Jan won a silver medal for making chipboards by utilising pine needle derived from the waste material of pine trees in order to avoid wildfires.

The leaves and wood of pine trees catch fire quickly and spread at a much faster rate as compared with other trees.

“I worry about environmental issues so I thought to prepare the project,” he told The Express Tribune.

Yasir is a student of Class IX at the Pak-Turk School Quetta.

“There are many more students like me with much greater potential who are awaiting platforms and opportunities,” said Yasir.

He credited his institution and parents for the achievement and dedicated the prize to Balochistan’s youth, who are working for greater good of society.

The Gold Medalist in Junior Category Mukkaram Fattah, 13, belongs to the Jaffarabad area and is enrolled in Class XII at Pak-Turk School Quetta.

He prepared mosquito repellent from peels of oranges by grinding them into powder forms.

“The idea stemmed from the persistent issue of mosquito virus back at my village,” he told The Express Tribune.

He said that the achievement was an answer to all those who insisted on a point that “there is no talent in Balochistan and “deny proper educational facilities” in the province.

“My teachers, principal and parents played a key role in my participation at the international event of climate change and I brought a gold medal for them because I promised myself that I will not let them down,” he said.

Mukkaram, with high hopes and an enthusiastic spirit, is ready to do more with his innovative ideas.

During the interview, both the talented youth presented their projects in the Physics Lab of Pak-Turk School.

Mukkaram and Yasir were disappointed by the government, especially the education department, for not acknowledging their achievement.

“We did a press conference along with our principal while some news channels have also taken our interviews, but unfortunately not a single government official approached us,” they lamented.

Pak-Turk School Principal Abdullah, who was with them in Kenya, was the one who submitted their projects for the competition. He is always urging and welcoming students to present innovative and new ideas to address challenges facing today’s world.

“Practical innovation and research-based work are my priorities since the day I joined the school,” he said, adding that schools should not make students memorising machines, instead they should encourage to do practical work.

He said, “I am proud of these two little heroes. I have many more students like these two who will come up with new inventions in the future.”

He said he was disappointed with the government officials as the education minister ignored and kept the kids waiting in his office for hours despite being informed.

The education secretary also did not give any response.

“It is common here that talent is not appreciated. It is that students want a reward or anything else, but they should at least be appreciated,” he said.

A few months back, Abdullah and his team organised a Science Fair in the school where students from different schools participated and numerous projects were prepared by the students.

“It is quite disturbing that the future of the students is being ignored by the rulers, who are claiming to bring prosperity to the province,” he said, adding that these “young minds are the future and don’t deserve the cold shoulder”.

It should be mentioned that the Balochistan government has no youth policy and no structure or platforms for students like Mukkaram and Yasir, who work day and night to make the country proud.

A protocol was signed between Punjab government and an international NGO of Turkey, Kimse Yok Mu, at Model Town, here today under which Turkish NGO has handed over a modern village consisting of 296 houses for flood affectees at moza Rakh Khanpur district Muzaffargarh, to Provincial Disaster Management Authority. Punjab government had provided 351 kanals […]