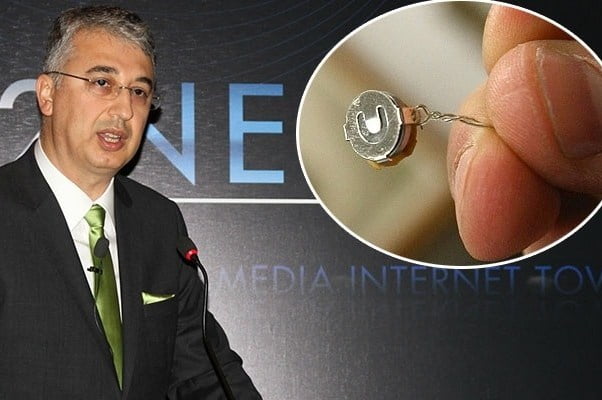 In a blistering statement over his dismissal from the top post at BİLGEM, a critical department within TÜBİTAK that prepares expert reports for court cases and state agencies, Hasan Palaz said he was forced to make changes on a scientific report that was prepared as part of a criminal investigation into the installment of bugging devices at Prime Minister Recep Tayyip Erdoğan’s office in Parliament and his home in 2012.

The prime minister announced on a live TV program on the evening of Dec. 23, 2012 that bugging devices were found in his office in his Ankara home, but he did not specify when the devices were found. “Security units [the police] found those devices. They were placed inside the office in my house. Such things occur despite all measures taken to prevent them,” he stated.

There were earlier rumors that two listening devices had been discovered in the prime minister’s office in Parliament, and two of Erdoğan’s guards had been fired in connection with the discovery. This was followed by claims that two other bugging devices had also been found in his automobile.

Sources from the Ankara Chief Public Prosecutor’s Office, which spoke to the media on condition of anonymity, said an investigation had been launched into the bugs after the prime minister spoke about them in the TV program.

TÜBİTAK was tasked to examine the bugging devices and Palaz led the work on the listening devices, he said in a written statement on Thursday.

Palaz said he shared the findings with the National Intelligence Organization (MİT) and the Prime Ministry. He also briefed the disciplinary board of the Prime Ministry twice about the content of the scientific report on the listening devices. Two years after the inquiry, Palaz said he was asked to change the date when the bugging device started functioning.

Facing unethical and political pressure to changes details in a scientific document, which was prepared in line with scientific norms, Palaz said his conscience and respect for the profession did not allow him bow to political whims and directives to tamper with findings.

Palaz said he faced threats of dismissal from the post if he failed to comply with the demand to make the changes to the report, and after Science, Industry and Technology Minister Nihat Ergün was replaced by Fikri Işık, those threats turned into a reality.

He was sacked as chair of BİLGEM and still faces pressure to resign from TÜBİTAK, where he has worked for 24 years. Instead of preparing politically motivated reports that lack scientific quality and impartiality to meet the demands of politicians, Palaz said his respect for the profession keeps him out of political wrangling and bickering that could kill science.

In a stern warning, he said the government’s interference in TÜBİTAK reports and politicians’ meddling in scientific inquiries would be suicide for the science world.

The discovery of the bugging devices led to an outcry and fueled a debate over who is responsible for monitoring and bugging the prime minister’s office.

When the allegations turned into full-blown recriminations and raging debates in Parliament over culpability regarding the installment of the devices, pro-government circles and media pointed to some organizations within civil society. According to allegations, the bugging device found in the prime minister’s office was placed there by individuals close to the Hizmet movement. The Journalists and Writers Foundation (GYV) on Aug. 13, 2013, said it condemned such accusations and called for the judiciary and the government to take the necessary action in the bugging device controversy.

The smear campaign websites have made accusations and lies and committed libel in order to defame journalists who work in media outlets close to the Hizmet movement as well as those critical of the government.