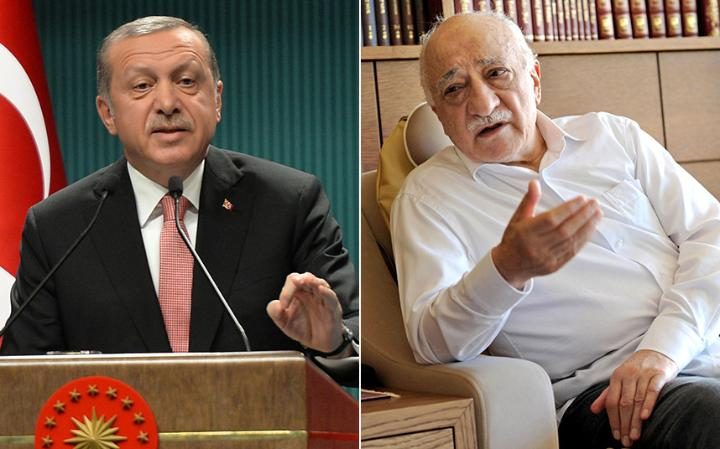 ith its leafy playing fields and historic buildings on the site of a former British army barracks, the Wilhelmsdtadt School in the Berlin suburb of Spandau could easily be mistaken for a English boarding school.

The only sign that something is different here is the pair of schoolgirls walking arm in arm through the campus, clad in long shapeless coats and Islamic headscarves.

Wilhelmstadt is one of the most successful Turkish immigrant schools in Berlin. With class sizes of just 15 and enviable exam results, it has been hailed as a story of successful intergation.

But in recent weeks it has found itself on the front line of a new confrontation that has divided Germany’s Turkish minority. Because Wilhelsmstadt is run by followers of Fethullah Gülen, the man the Turkish government accuses of being behind last month’s failed coup attempt.

Boycott lists are going around on social media, urging people to avoid shops and businesses run by alleged adherents of the cleric. The mayor of Berlin says he was approached by the Turkish government to take action against schools like Wilhelsmtadt.

“A friend of mine went to pray at his regular mosque in Göttingen and some one started taking pictures of him with his phone,” Osman Örs, a Berlin imam and follower of Mr Gülen says.

“Then they told my friend you’re not welcome here any more. We don’t want any traitors in our mosque or our city.”

Turks make up by far the largest minority group in Germany, with an estimated 4m people of Turkish origin living in the country, including 1.5m Turkish citizens. The fall-out from the coup has shown how deeply the fault lines of Turkish politics run into Germany.

When the faithful spill out of the Sehitli mosque on the edge of Berlin’s former Tempelhof airfield after Friday prayers, conversation inevitably turns to Mr Gülen.

“Gülen is a terrorist, an absolute terrorist,” Kadir Inonir, one of the worshippers, says. “He fired on his own people, he used F-16s against them. Can you imagine such a thing in London?”

Here there is no doubt over Mr Erdogan’s accusation that Mr Gülen  was behind the coup — or if there is, people are too nervous to voice it. Many avoid politics, slipping away when the subject comes up.

“President Erdogan may be a bad thing for Angela Merkel, for the Americans, but for his country and his people, for us, he is a hero,” Mr Inonir says.

With its dome and minarets, the mosque behind him could have been transplanted from Anatolia to the heart of Berlin. Like almost every Turkish mosque in Germany, it was built by DITIB, a Turkish government agency which also supplies the imams.

Mr Örs says Turkey is using Ditib to spread its crackdown against the Gülen movement into Germany.

Mr Örs is one of the few Turkish imams in Germnay who doesn’t work for Ditib. He is imam at Berlin’s House of One, a project to create a joint place of prayer for Christians, Muslims and Jews that has made headlines around the world. A German citizen born to Turkish parents, he says he feels more German than Turkish.

But now he is on the defensive. He works for Forum Dialog, a Gülenist NGO dedicated to interfaith dialogue.

“We had to take our names off our website,” Celal Findik, the NGO’s director says. “I got threatening messages on my mobile phone, calling me a traitor and saying Mr Gülen will be hanged. My whole family is in Turkey and I’d like to visit them, but it isn’t safe for me now.”

The NGO has not been directly targetted by Mr Erdogan’s supporters, he says. “But we’re funded by donations, and we’re already running into trouble there.”

He shows some of the boycott lists that have been circulating on social media, urging German Turks to avoid businesses with alleged links to Mr Gülen. They are not just large concerns: they include a local ice cream parlour.

Mr Gülen’s followers accuse Turkey of orchestrating a campaign of intimidation against them in Germany.

German MPs recently demanded an investigation into claims by Welt am Sonntag newspaper that Turkey’s MIT intelligence service has a bigger network of informers in Germany than the East German Stasi secret police had in West Germany.

The newspaper claimed that MIT has some 6,000 informers in Germany and uses them to intimidate members of the Turkish community.

“Mr Gülen said the coup had nothing to do with him. He condemned the coup, and so do we,” Mr Findik says. “Even the worst democracy is better than a military dictatorship.”

The question of the exiled cleric’s guilt or innocnence remains unresolved for now, at least outside Turkey. But the extent to which his followers can be considered to be complicit in any plot, if there was one, goes to the heart of the nature of Gülenism, which remains shadowy.

Mr Findik and Mr Örs say there is no Gülenist organisation as such. Instead they say it is a movement of those who follow the cleric’s teachings. They refer to this  movement as Hizmet, the Turkish word for “service”.

“If you read one of Mr Gülen’s books and you agree with it, then you have joined Hizmet,” Mr Findik says. “We have people in Hizmet who are not even Muslim.”

Former members who have left the Gülenists and spoken to the German press about their time in the movement paint a different picture, however. They speak of tightly controlled organisation which seeks to control every details of its adherents’ lives. They say the movement recruits its followers through student residences known as “Houses of Light”.

They describe the Gülenists as obssessed with power, and point to a sermon in which Mr Gülen told his followers: “You must move in the arteries of the system without anyone noticing your existence until you reach all the power centres.”

Inside Turkey, the movement sought to instal its followers in powerful positions in every facet of the state, from the military to judges. In Germany, so far as is known, it operates mostly schools and NGOs like Forum Dialog.

“Build schools, not mosques,” Mr Gülen told his followers. His movement is believed to run more than 100 educational establishments in Germany, including night schools and training centres.

Gülenist-run schools such as Wilhelmstadt have been careful to point out that they teach the standard German syllabus, not Mr Gülen’s writings. and do not attempt to inculcate pupil’s with Gülenist beliefs. Numerous complaints have been made to the German educational authorities over Wilhelmstadt’s Gülenist links, but not a single one has been upheld.

Michael Müller, the mayor of Berlin, told Bild  newspaper recently the Turkish government had asked him to take action against Gülenist schools.

“I was approached by a Turkish government official and asked if we were willing to take a critical look at the Gülen movement in Berlin and possibly support measures against them,” Mr Müller said.

“It was particularly with regard to the movement’s educational institutions. I refused and made it clear that Turkish conflicts have nothing to do with us. We do not need lessons from Mr Erdogan in democracy and human rights.”

İLHAN GÖKALP/TUĞBA ÜLGER, LONDON Many of her fans would say her songs touch their soul, with the rhythmic patterns of her smooth voice combining Arab and Western flavors in a harmonious bridge between East and West. Born to a father of Arabic-Jewish ancestry and a British mother, singer Natacha Atlas is among the most popular […]