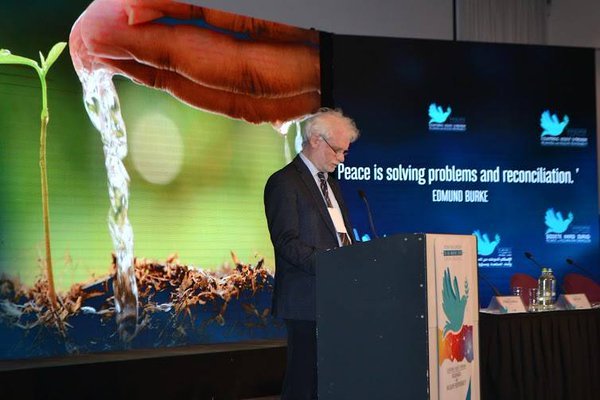 The 2-day event allowed the participants to discuss violent extremism and what Muslims can do against it. The symposium came out as an initiative to bring together Muslim and non-Muslim scholars and get them to propose projects on the issue. The workshop sessions were titled, “Roots Causes of Violent Extremism,” “Preventing Terrorism: Theological Perspective,” “Working With Muslim Women to Counter Violent Extremism,” “Interfaith Dialog and Preventing Violence” and “Moral Integrity and Jihad.”

In his welcoming speech, Prof. Emmanuel Gerard, the head of Gulen Chair at Ku Leuven, said they extended the term of agreement with the school, as they enjoyed the cooperation. “We had the opportunity to incorporate the school’s Catholic perspective into others. Violent extremism is a threat to peace. The Gulen Chair seeks to introduce a unique perspective to faith in social arena and intercultural encounters.” Rejecting the current view that religion is the problem not the solution against extremism as a result of the recent incidents, Gerard went on to say, “That is the reason why these opinion leaders, academics and many others have gathered here today.”

Gulen speaks of key values of our time

The dean Prof. Bart Kerremans of School of Social Sciences at Ku Leuven said it has been an honor for the school to have the Gulen Chair under their umbrella, in his speech frequently quoting Mr. Gulen’s words.

“Gulen has been advocating key values of our time and making great effort to mobilize people around him, to make religion better understood. He calls on Muslims and non-Muslims alike to take action. Hizmet is a faith-motivated movement but not necessarily a faith-based one. It doesn’t just talk the talk, it walks the walk,” he said. Kerremans also stressed the need for cooperation to fight against extremism by quoting Mr. Gulen’s words, “Regardless of our different feelings, views or roots, we are in this boat together.” No other movement has committed itself to this cause as much as the Hizmet has done, Kerremans argued.

A former member of Nobel Peace Prize committee Dr. Gunnar Stalsett of the Church of Norway underscored that the two concepts religion and religiosity need to be well communicated. The event came with a perfect timing to achieve that, according to Gunnar.

Prof. M. Din Syamsuddin of Indonesian Council of Ulema noted the root causes of the recent violent acts need inspection to see whether they are religious or not. “This is not just about Muslims but entire humanity. All nations need to band together. Terrorism always has a political aspect. It aims to accomplish a political revolution. Islam needs to be protected against these kinds of manipulations. A global injustice has brought in what we are witnessing today. Islam and the West are like pillars of shared civilizations and they need to have a closer relationship these days.” He also said there are Muslim countries with despot leaders, which is undermining human rights and democracy.

Closing the event, Rik Coolsaet of Ghent University argued that extremism is not a disease but a symptom and its root causes demand a deeper study.

The Meridian International School in the Nepali capital of Kathmandu, founded by Turkish businessmen and educators in 2002, has opened up its premises to locals after the city was hit by a powerful earthquake on Saturday that killed thousands, with several thousand others injured and seeking medical treatment and help.

A book written by Kurdish journalist Rebwar Karim on Islamic scholar Fethullah Gülen’s approach to the Kurdish question has been attracting a significant amount of attention in northern Iraq.