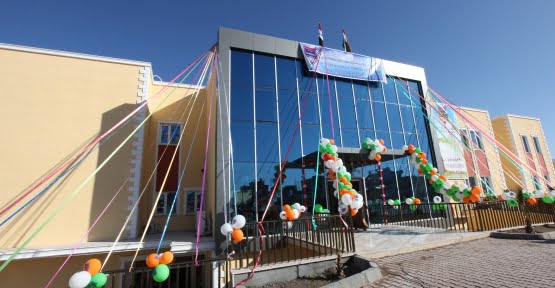 Diplomatic sources, who spoke to Today’s Zaman on the condition of anonymity, said Erdoğan had personally demanded the closure of the Turkish schools in the KRG when Barzani paid a visit to İstanbul on Feb. 14. Barzani reportedly turned down Erdoğan’s request, saying the schools are of very high quality and that upper-class families all send their children to these schools.

After pressure from the Turkish government and members of the Justice and Development Party (AK Party) intensified, Barzani asked that a public opinion survey on the Turkish schools be conducted. According to the results, 79 percent of the people in the KRG said the schools should not be closed.

The results of the survey, available on the Rudaw website, an online newspaper in the northern Iraqi city of Arbil, show 79 percent of the respondents answered “No” to a question asking, “Do you want the closure of schools belonging to the [Fethullah] Gülen community?”, while 18 percent of the participants answered in the affirmative. The rest of the participants expressed no opinion on the issue.

The Kurdistan Workers’ Party (PKK) has been spreading propaganda pushing for the closure of these schools, which have been operating in northern Iraq for around 20 years.

The chairman of the Journalists and Writers Foundation (GYV), Mustafa Yeşil, appeared on Rudaw TV recently to comment on the political developments in Turkey that have infuriated members of the AK Party. Party members had reportedly called the managers of Rudaw TV and asked them not to broadcast people critical of the Turkish government. A TV program that would have hosted members of the GYV and Kurdish intellectuals in the KRG was also reportedly canceled due to pressure from the Turkish government.

A week ago, the KRG denied claims that the alleged “parallel structure” within the Turkish state has a wiretapping base in the autonomous region, saying the reports do not reflect the truth and that there is no such base in the region.

The “parallel structure” is a term invented by Prime Minister Erdoğan to refer to adherents of the Hizmet movement, inspired by Turkish Islamic scholar Fethullah Gülen, who allegedly operate from within the police and the judiciary.

Sefin Dizayee, a spokesperson for the KRG government, told the Cihan news agency that there is no such base in the region, stressing that not even their own government is wiretapped.

Several pro-government Turkish dailies, including Star and Yeni Şafak, have alleged that there is a nine-person team from the “parallel structure” operating in the KRG and that this team has wiretapped well-known businessmen such as Ahmet Çalık, Hüsnü Özyeğin and Ahmet Nazif Zorlu. According to these reports, the alleged organization sent audio recordings to an archive center in the US city of Philadelphia. The organization is also alleged to have a station in Kirkuk that is not permanently staffed, according to the Sabah daily.