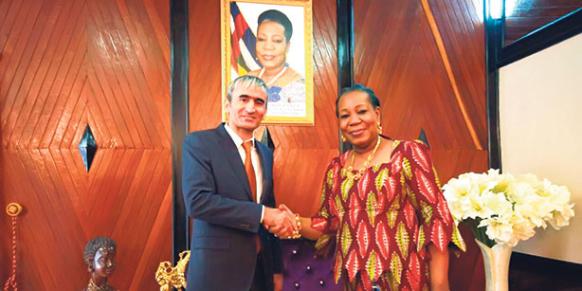 President Samba-Panza hosted the general manager of the International Central African Turkish School, Yaşar Sağınç, at her presidential office during a period when the Turkish government, led by the ruling Justice and Development Party (AK Party), has been pressing some African countries’ leaders to close down Turkish schools operating in their countries.

The CAR is one of the poorest countries on the African continent. A civil war erupted in March 2013 between Christian and Muslim militia groups and this war has continued since then.

Addressing to Sağınç, Samba-Panza also said that she has been monitoring the activities of the Turkish school closely and has been pleased with both its educational activities and the social welfare projects conducted by it.

Sağınç thanked Samba-Panza and added: “Humanity is traveling in the same boat. For the solution of problems on Earth, the biggest investment is investment in humans. Turkish schools [in Africa] are investing in people with their educational and social welfare projects.” Samba-Panza also thanked the Turkish doctors who have gone to the CAR to provide medical services to people, despite all the risks they face.

Most prestigious school in the country

The International Central African Turkish School has been operating in Bangui, the Central African capital, since 2004. A certificate of achievement and a diplomatic immunity document were given to the managers of the Turkish school in 2007 for their educational activities in areas suffering from poverty. Furthermore, the former general manager of the school, Zubeyir Gümüş, was given a meritorious service medal in 2009. During the award ceremony held by the president at the time, all members of the Cabinet and many foreign ambassadors serving in the country were present.

The Turkish school is the country’s most prestigious secondary education institution. The children of the country’s foreign minister, interior minister, the gendarmerie general commander, many police chiefs, diplomats, UN representatives and foreign ambassadors receive their education at this school. However, Sağınç also ensures that the gates of the school are also open to the children of poor families in the same way without any discrimination. He says that 10 percent of the school’s students are orphans who are granted scholarships by the school. The Turkish, English and French languages are taught at the school.

Referring to the two-year civil war in the country, Sağınç told Today’s Zaman following the meeting with Samba-Panza: “During the incidents, the Turkish school was the only one which was not closed. No building was left un-looted in Bangui. They only did not touch our buildings. No rebel group or looters attacked any building where a Turkish flag was flying. Even if they had attempted to do so, people in the nearby neighborhoods would never have allowed them to do so. Our neighbors told us: ‘This is our school. We would never allow anyone to enter it.’ They even patrolled in front of the school.”

Pointing to the ongoing religion-based clashes and tensions in the country, Sağınç said that the Turkish school serves as though it was an “island of peace” in the country, adding: “The only school where Muslim and Christian students receive an education together is our institution. It is also the only school that Muslims can attend. Both of the two rebel groups which are fighting with each other, the Seleka and Balaka rebel groups, brought their children to our school for their education. The children of these two groups receive an education at the same school and stay in the same dormitory at nights.”

Sağınç mentioned remarks made by President Recep Tayyip Erdoğan during a visit to Ethiopia on Jan. 22 in which he called on African countries to close down the Turkish schools operating in their countries which are affiliated with the Gülen (Hizmet) movement inspired by Turkish Islamic scholar Fethullah Gülen.
“In countries we visit, we have been talking about the status of these schools and saying they should be closed down,” said Erdoğan, adding also that he has been telling African authorities that the Turkish Ministry of Education is ready to offer the same service provided by these schools. “The ministry is close to finishing its preparations to that effect,”Erdoğan said.

Sağınç said that the remarks by Erdoğan saddened the Turkish educators and other Turkish educational volunteers in the country deeply, saying: “I cried when I heard Erdoğan had called us [educators working at Turkish schools across the world] ‘terrorists’ and ‘agents.’ Being referred to as a ‘terrorist’ while we are trying to fly our nation’s flag amid very difficult circumstances saddened us very much.”

The Turkish president declared the Hizmet movement a treasonous enemy after a corruption scandal involving people in his inner circle erupted with a wave of detentions on Dec. 17, 2013. He openly declared last year that he would do whatever it takes to eliminate the “parallel structure,” a term of his invention to refer to alleged sympathizers of the movement within the state bureaucracy, even if this requires a “witch-hunt.”

There are more than 100 Gülen-inspired schools in Africa, as well as other parts of the world. The government praised these schools in the past as key institutions promoting Turkish culture abroad.