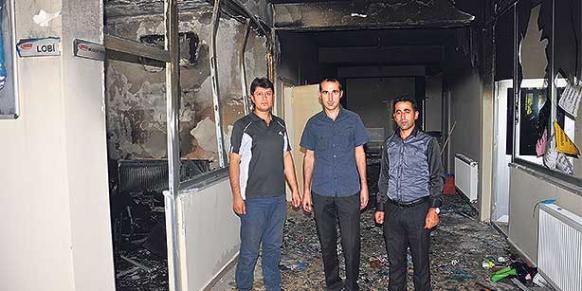 At least one student injured as PKK terrorists set a student dorm on fire in Muş. (Photo: Cihan)

A group of terrorists threw Molotov cocktails into the dorm on Saturday night. Tension has been high in the Southeast after the removal of a statue of Mahsum Korkmaz — believed to be first PKK member to fire a shot at soldier — in Diyarbakır’s Lice district. A dershane is a private tutoring school that helps to prepare students for examinations by providing extra courses to supplement their ordinary education.

A PKK group entered the five-story dershane building by breaking down the door at around 8 pm after a demonstration in the Bulanık district. They first damaged the ground floor with stones and clubs and later started a fire with Molotov cocktails and fireworks. Three teachers, two students and another member of the staff were inside at the time of the terrorist raid. They were evacuated from the building by the police officers who arrived at the scene after the assault was over and the district’s fire brigade brought the fire under control. Teachers speaking to the media after the incident said the police did nothing and watched indifferently while the PKK group was deliberately trying to kill people inside the dershane.

The fire also damaged the dorm, which is on the uppermost story of the building. Badly affected by the smoke, one teacher was hospitalized. The injured teacher was discharged later that night after receiving treatment. He talked to the Cihan news agency and said that the police waited for too long before moving in to disperse the demonstrators. Had the police intervened earlier, none of these things would have happened, he said. The teacher also said they were rescued from suffocating at the last minute.

The same dershane was the target of the PKK the day before this incident, which has been met with a harsh reaction from the district’s people. Dershanes are usually regarded as a source of great assistance for students in the east and southeast in order to compete with western Anatolia, which is comparably more affluent and has better education opportunities. The PKK is a notorious enemy of private education institutions, as giving a young person a future makes it harder to recruit them as militants.

The assaulted dershane in Muş sent 150 high school graduates to different universities across Turkey this year and many primary school students in the district won places at science high schools, the most prestigious and highest quality secondary level educational institutions in Turkey.

The PKK demonstrations against the dismantling of a statue in Diyarbakır’s Lice district in memory of the prominent terrorist, Mahsum Korkmaz, believed to be the first person in the organization’s history to have fired a bullet at a

Turkish soldier three decades ago, did not calm down over the weekend.
In the Yüksekova district of Kurdish-populated Hakkari province, a group of around 20 masked men started chanting slogans after blocking a main street in the city center by setting up a road block. The store owners on the street closed their shops as the police intervened with water cannons. A fight soon erupted as the PKK group began hurling stones, fireworks and Molotov cocktails at the police. The barricades were lifted by the police and the fight continued in the alleys.

In Bingöl’s Beşyol neighborhood, a group of protesters from the Patriotic Revolutionist Youth Movement (YDG-H) — which is affiliated with the Kurdistan Communities Union (KCK), the urban arm of the terrorist PKK, staged an illegal demonstration to protest the removal of the statue by blocking a main road. Riot police asked for peace but the group responded with Molotov cocktails. A fire broke out as one of the petrol bombs hurled by the group hit the rooftop of a nearby house, causing a fire. The fire was brought under control quickly by residents. The police units used tear gas to disperse the protesters, who escaped into side streets. The clashes continued until Sunday morning. An eyewitness told the press that a white truck carrying around a dozen children came to the scene shouting slogans and hissing.

At least one PKK sympathetic demonstrator was killed and two others were injured during the clashes. The Lice Criminal Court of Peace decided on Monday to take down the statue of Korkmaz. The decision to demolish the statue came after a criminal complaint submitted by the Diyarbakır Governor’s Office early on Monday.

Tim Franks – BBC Newshour, Pennsylvania – Speaking to the BBC’s Newshour, Fethullah Gulen said: “It is not possible for these judges and prosecutors to receive orders from me.” – Fethullah Gulen has been called Turkey’s second most powerful man. He is also a recluse, who lives in self-imposed exile in the US. – But now, […]