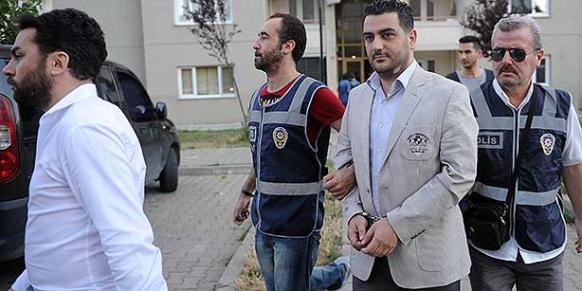 Dozens of police officers were detained as part of a police operation apparently targeting members of the "parallel structure," a euphemism Erdoğan uses to refer to the Hizmet movement. (Photo: Today's Zaman, Selahattin Sevi)

Turkish prosecutors carried out a number of arrests and raids on the morning of 17th December 2013 as part of a series of on-going corruption investigations implicating a number of people (e.g. sons of three cabinet members) with very close ties to Prime Minister Recep Tayyip Erdoğan’s AK Party government. PM Erdoğan’s response has been to call this a coup attempt against his government orchestrated by a coalition of foreign and domestic enemies and to call for Turkey’s second struggle of independence against these forces. Erdoğan claims that the ‘domestic pawn’ of this plot is the Gülen-inspired Hizmet movement which he claims to have infiltrated the state. His number one election campaign promise: to crush and annihilate the treacherous Hizmet movement. For further background information on the corruption investigations please click here.

Why Erdoğan chose Hizmet as his phantom enemy

1. To justify the draconian measures he needed to take to disrupt and prevent the corruption investigations of 17th and 25th December 2013, implicating him and his government 2. To curtail Hizmet which was both independent of his government and able to speak to the observant Turkish Muslims

1. Subdue and control the media which has been an ongoing process and is not restricted to Erdoğan’s agenda against the movement nonetheless is extremely useful to him in this process as it ensures the government’s narrative is continually repeated and public perception and consciousness is shaped accordingly. Hence the Twitter and YouTube ban because they could not be controlled. 2. Profile all public employees, bureaucrats, academics and journalists by empowering Turkey’s National Intelligence services which we now know dates back to the National Security Meeting of 2004 where Erdoğan and the generals agreed a nationwide strategy against the movement including its profiling.  3. Dehumanize Hizmet participants thereby making it easier for the public to accept the persecution and eventual prosecution to follow4. Purge those profiled deemed to hold the constitution and law above unflinching loyalty to PM Erdoğan. Replacing the head of İstanbul police force, the largest in the country, with the former mayor of Aksaray who has no policing background whatsoever is one such example. To date, over 20,000 people have been purged, demoted and relocated. The PM accepted that this was a ‘witch-hunt’ of those he deemed to be ‘traitors’.5. Disrupt Hizmet organizations by for example shutting down university preparation courses, attempting to nationalize Bank Asya, putting pressure on businesses advertising in Zaman, revoking planning permissions to build new schools etc.  6. Disrupt Hizmet supporting businesses by for example revoking relevant licenses as in the case of İpek Holding mining company, putting pressure on other business partners from trading with businesses with close links to Hizmet. 7. Prepare the legal and evidential groundwork for criminalization of Hizmet through a range of measures listed below.

Why Erdoğan Must Prosecute Hizmet

1. To justify the narrative he has been offering since the Gezi park protests, that is that there are foreign powers working with domestic traitors bent on undermining Turkey’s success2. ‘Prove’ that the corruption investigations implicating him and his government were in fact a coup attempt3. Justify the draconian measures he has taken against prosecutors and police to disrupt the corruption investigations on the pretext that they were linked to Hizmet, the domestic partners of this ‘coup attempt’4. Provide him with greater justification to undermine Turkey’s separation of powers and thereby ensure his future immunity from prosecution 5. Deliver on his number one promise to prosecute the movement and thereby remove a credible oppositional and alternative voice

What follows is a list of tangible steps taken by the AKP government post-17th December to ensure that the Hizmet movement is successfully prosecuted and criminalized. These do not include all steps taken against the movement, only those most relevant to this particular process: 1. Changing HSYK by giving the government critical power over the appointment of prosecutors and judges and their assignment to investigations and court cases shifting the power balance in the Supreme Board of Judges and Prosecutors (HSYK) by passing a law (1) in February.2. Creation of super peace judges with far reaching powers by the passing of a new judicial package (2) in mid-June. A single peace judge will have the unilateral power to start and end investigations and to issue all types of orders such as detentions, searches, arrests, the freezing of assets etc. Previously, these decisions could only be made by a peace court comprising a panel of judges as opposed to a single judge. The new peace judges will be appointed by the now compromised HSYK.3. Restructuring of the Supreme Court of Appeals, subordinating the judiciary to the government by the passing of the same judicial package mentioned above. 4. Ankara Chief Public Prosecutor Serdar Çoşkun’s orders dated 11 June to the Ankara Police Department and its Organized Crime Bureau to carry out a secret investigation into the Hizmet movement to gather intelligence about Hizmet participants and Hizmet affiliated media group, civil society organizations, private schools, student dormitories, exam preparation centers, companies, foundations and associations.5. Turgut Aslan, Head of Counterterrorism Unit of National Police Department (TEM)’s written 23 point order (3) dated 25th June sent to police departments in 30 provinces requesting that they contribute to the ongoing investigation into Hizmet by the Anti-Constitutional Crimes Investigation Bureau asking them if Hizmet has an armed division; if they have power to overthrow the government or abolish the Constitution; if they were involved in some of Turkey’s most infamous murders in recent years such as Hrant Dink in 2007, Catholic priest Father Santoro in 2006, a member judge of the Council of State in 2006, three Christian missionaries in Malatya in 2007 and Üzeyir Garih in 2001; what individuals or foreign powers and groups they work for and how often Hizmet’s prominent participants travel abroad from Turkey. TEM’s written order also asks the police departments in 30 provinces to find secret witnesses who will testify against the movement and that these can include those that have been prosecuted on criminal charges and found guilty since 2003 onwards. The steps above state the legal and evidential groundwork undertaken by PM Erdoğan’s government to prosecute and successfully criminalize the Hizmet movement in Turkey. The steps to control the HSYK, the Supreme Court of Appeals and the creation of new super ‘peace’ judges with extraordinary powers is an attempt to ensure that a government appointed judge and prosecutor can try and judge the Hizmet movement and ensure that the verdict is upheld on appeal. The orders issued by Chief Prosecutor Serdar Coşkun and the head of TEM, Turgut Aslan, are proof that the plan is well underway. These steps are part of a wider plan against the Hizmet movement as revealed in the parliamentary question posed by İdris Naim Şahin, former Interior Minister and AKP member of parliament, to the current Interior Minister Efkan Ala in which Mr Şahin states that he has been handed an action-plan document detailing how the government will crack down on the Hizmet movement and criminalize it within its courts. Mr Şahin states that document is signed and asks whether or not it is genuine.