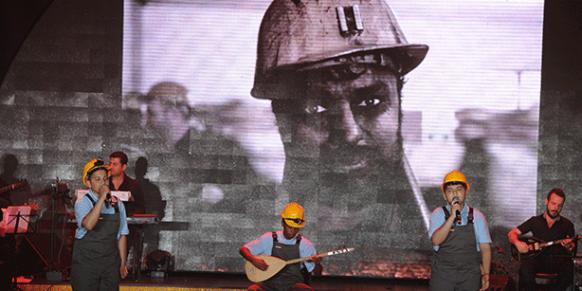 The singing competition final of the festival witnessed nearly 100 students from 22 countries on Sunday. Previous editions of the event were hosted in Turkey and the popularity of the event has been increasing both inside and outside Turkey. However, after the Dec. 17 corruption and bribery scandal, the hostility of the Justice and Development Party (AK Party) government towards the Hizmet movement has made itself crystal clear, and a “witch hunt” against the Hizmet movement has been started in public offices.

Along with this hostility, the absolute state authority that the AK Party government holds has placed the Hizmet movement at the center of a smear campaign both in public and media discourse and treated Hizmet as an “enemy to spoil no matter what it costs.”

The organizers of the International Language and Culture Festival preferred to hold the event in foreign countries with the aim of avoiding potential problems and tensions. One of the jury members, distinguished opera artist Hakan Aysev, said this happiness should be felt throughout Turkey as well.

Islamic scholar Said Nursi (1876-1960), made a distinction between negative and positive nationalism. For Nursi, negative nationalism causes problems like violent clashes, ethnic cleansing and threats to the stability and order of communities. Nursi propounds antidotes such as knowledge and industrialization for those problems (Nursi, 1996, Risale-i Nur Külliyatı, Nesil Yayınevi).

In a nutshell, it can be said that events like the International Language and Culture Festival — which was, in a sense, ‘banned’ in Turkey by the government — play a key role in establishing bridges between countries and pave the way for mutual trust in international relations. Attempts to block such events not only discourage people from feeling sympathetic towards such events, but also deal a serious blow to the image and vision of Turkey. We all should bear in mind that the real wretches are not those who cannot hold such an event in Turkey, but those who put a dent in such beautiful projects.