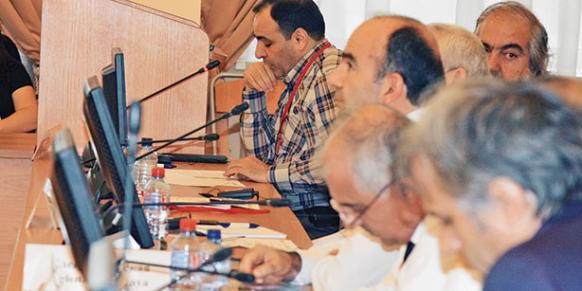 A two-day forum co-organized by the Journalists and Writers Foundation (GYV) and the Turkish-Russian Cultural Center kicked off in Moscow on Friday to discuss media ties between Turkey and Russia.

Dozens of journalists from the two countries participated in the first day of the event. The forum, titled “Media Bridge between Asia and Europe,” was held at the Russian State University for the Humanities (RGGU).

Turkish Islamic scholar Fethullah Gülen, who is the honorary chairman of the GYV, sent a letter to the forum in which he expressed his wishes for the gathering to produce fruitful results to the Turkish and Russian media. Gülen, who was invited to attend the event, said he was sorry to miss the forum due to health problems. “It is a pleasing development to see that participants from Russia and Turkey convene at an event to discuss the problems and futures of their press,” the letter stated.

“There is no doubt that the media is a form of power today. What matters is to whom this power belongs and for which purposes it is used,” the scholar further stated, and added that the power of the media may spell goodness for humanity or the opposite, depending by whom it is used.

One other topic Gülen touched in his letter was the principle of objectivity in the media, which he said is often violated worldwide. “Adopting this principle and reflecting this principle in stories require a strong character, a strong culture, a sense of responsibility and an understanding of putting national interests above anything else. Unfortunately, our [Turkish] traditional media has given a wrong response as to whether it should be a guide or mirror to the society and it has preferred to display all incidents with all details instead of pondering on ways to tell the people about characteristics of an ideal society,” he added.

Gülen went on to state in his letter that business-related ties between media bosses and political authorities are a significant hindrance to freedom of thought and expression.

Today’s Zaman Editor-in-Chief Bülent Keneş, one of the participants of the forum, also delivered a speech at the event. He said Turks have a poor record of reading, with a study carried out by the Culture and Tourism Ministry in 2011 suggesting that only seven books are read in Turkey in a year by each citizen. According to the study 44 percent of the Turkish population reads books, while 34 percent reads newspapers. The remaining respondents said they read neither books nor newspapers.

According to a separate study carried out by Fırat University, 23 percent of Turks spend their spare time watching TV. The study showed that Turks watch an average of four hours of TV a day. Only 17 percent reads books, newspapers or magazines in their spare time.

Fethullah Gülen’s general conduct is modest. He does not consider himself superior to anybody else, and he holds tolerance in the highest regard. The way that these values reveal themselves in his personal conduct are that Gülen listens carefully to others before he begins to speak. He is also in general a very bashful person.