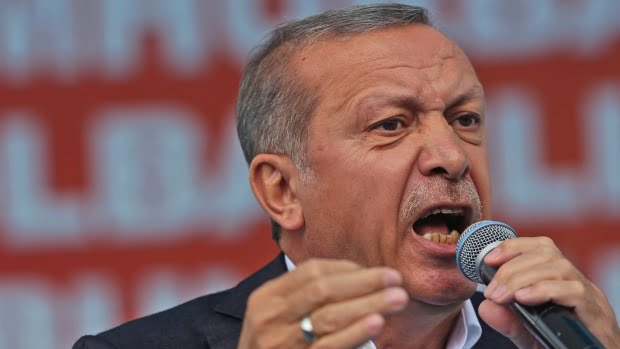 The recent reports emanating from Turkey must interest everyone who desires freedom of association for the millions of people that dwell in that strategic country. Turkey under the watchful eyes of President Recep Tayyip Erdogan and his AK party co-travellers has continued to drift ceaselessly to a full-blown dictatorial country.

It all started with the massive and continued clampdown on journalists, rights activists, academics, members of Gulen movement and of recent, political parties as well as their leaders for daring to have political orientations different from that of the Erdogan-founded ruling AK party.

Gulen movement, which is inspired by the highly-respected United States based cleric, Fethullah Gulen, has been brazenly targeted for total destruction by President Erdogan after the failed coup in that country few months ago. The iron-hand President accused members and sympathisers of the movement as being behind the coup, an allegation that has been repeatedly denied by the peace-loving Gulen.

Since the failed coup, nearly 100,000 persons are now cooling their heels in the unfriendly Turkish detention cells, another 37,000 have also been arrested all because of either suspected link to Gulen movement or because they share ideas that appear not to support government positions in many of its anti-freedom policies.

Even the newspapers and members of parliament are not spared of Erdogan’s power intoxication. About a week ago, Turkey’s secularist Cumhuriyet newspapers’ daily Editor-in-Chief, Murat Sabuncu and columnist Güray Öz were detained after police raided their residences.

In the latest stage in President Erdogan’s clampdown on alleged dissidents in the country, which signals his regime’s increasingly authoritarian policies, Erdogan has now taken his dictatorship to a new height by the recent detention of leaders of a major opposition party in the country for failing to line up behind the government quest to further subjugate the freedom of the Turkish people.

The arrest of the leaders of the country’s main pro-Kurdish opposition party in an alleged terrorism investigation in addition to the hundreds of thousands of Turkish people in detention, has continued to draw strong international condemnation of a widening crackdown on dissent under President Tayyip Erdogan.

Selahattin Demirtas and Figen Yuksekdag, co-leaders of the Peoples’ Democratic Party (HDP), were jailed pending trial after being held in overnight raids. Ten other HDP lawmakers were also detained, although some were later released.

The United Nations human rights office has already warned that the arrest of elected members of the Turkish parliament’s third largest party, and the detention or suspension of more than 110,000 officials since a failed coup in July, may “go beyond what is permissible.”

The United States on his part expressed deep concerns over the ugly events going on in Turkey, while Germany and Denmark summoned Turkish diplomats over the Kurdish detentions, and European Parliament President Martin Schulz said the actions “call into question the basis for the sustainable relationship between the EU and Turkey”.

The HDP, which made history last year by becoming the first Kurdish party to win 10 percent of the vote and enter parliament, said the detentions risked triggering a further unrest in the country.
While some few countries hitherto notorious for dictatorship  are walking away from the ‘rule of force’ to allow freedom for their people, President Erdogan and his co-travelers in the AKP appear to see nothing wrong in cracking down on media and suppressing opposition. This ugly trend has led to experts coining various terms to describe the type of ‘democracy’ that holds sway in Turkey, with many likened it to mere authoritarianism.

But to actually think of it, is Turkey really operating a democracy or an illiberal democracy? The country regularly holds periodic election just like other democratic states, yet, hard-won freedoms and opposition views, which are major ingredients of democracy are often suppressed with iron hand.

Though Erdogan continues to dismiss condemnation of his tyrannical onslaught against oppositions and sympathisers of Gulen movement with a wave of hand, it is high time more pressure is mounted on the President and his AK party to allow Turkish people enjoy the fundamental human right of freedom of speech and that of association without subjecting them to a daily dose of either physical or psychological torture through government actions or the President’s body language.