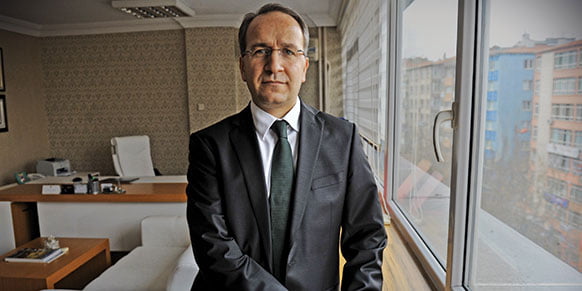 İSTANBUL
What is the real goal of the black propaganda that has been aimed at Fethullah Gülen since the Dec. 17, 2013 operation? Gülen’s attorney, Nurullah Albayrak, who initiates legal proceedings against at least 10 fabricated reports on his client on a daily basis, spoke to Sunday’s Zaman on this matter.

Albayrak says the perceived enemy in the Feb. 28, 1997 process was religious fundamentalism, but now the perceived enemy in the ongoing process is the “parallel state.” Albayrak, who is extremely busy publishing responses to the fabricated reports and lies produced against his client, believes that the actual goal of the propaganda and lies is to cover up the corruption charges and block the relevant investigations.

Albayrak stresses that those figures who are subordinated to the elite and embedded in intelligence units have played the lead roles in both processes, adding that false reports, distortions, fabricated intelligence reports and psychological warfare have been used. In response to allegations that Gülen was also responsible for the Feb. 28, 1997 coup, Albayrak says this is a huge distortion of the facts and that Gülen was one of the victims of this process, in which the law and democratic principles and rules were suspended and innocent people were smeared through media reports.

Albayrak recalls that Gülen suffered extensively from the powerful figures and media of the time. The Sabah and Star dailies published reports in which they argued that Gülen should be handed the death penalty. A number of lawsuits were filed against Gülen during this process. However, he was acquitted of all charges, and the Supreme Court of Appeals confirmed the acquittals on June 24, 2008. Albayrak stresses that it is extremely unfair to argue that Gülen was responsible for the Feb. 28 coup, given that he was one of the primary victims of the process.

A smear campaign was staged in 1999 to ensure Gülen’s prosecution. A similar campaign is being carried out now. When asked about the return of the same allegations, which were previously dropped and proved to be false, Albayrak says a political administration seeking extraordinary powers and unwilling to abide by the legitimate boundaries of the Constitution and laws will invent phantom enemies and rely on methods of psychological warfare to convince people that they are dealing with these enemies so that the government’s illegal activities are justified. He further states that a political administration of this kind will carry out illegal activities to deal with its perceived enemies. He additionally notes that these black propaganda reports are published and disseminated on a daily basis by 10 TV stations and newspapers to support this government approach. Albayrak believes that the primary goal is to cover up the corruption charges based on legal investigations and carried out by the judiciary and to block the investigation process.

Albayrak recalls that the main goal of the black propaganda raised against Gülen is to fabricate evidence for a case against Gülen and members of the Hizmet movement. The ultimate goal, he further argues, is to ensure that the movement is classified as an organized crime syndicate. The black propaganda reports will be used as evidence to substantiate the allegations. Asked about the main source of the allegations that the Hizmet movement had infiltrated the police and judiciary to seize control of the state, Albayrak says they had discovered this source to be “the dark corridors of Ankara.” He holds that this structure is an illegal entity set up to fabricate false reports and evidence. Albayrak refers to a statement of the deputy chair of the Scientific and Technological Research Council of Turkey (TÜBİTAK) as clear evidence of attempts to fabricate evidence in order to substantiate the allegations.

Albayrak admits that there is no legal obstacle to Gülen’s return to Turkey. But he adds that a person is entitled to travel to and reside in the place of his choosing, and thus his client is exercising a universal right. Therefore, it is not fair to condemn or accuse somebody because of where he wants to travel or live. In addition, Gülen stresses that he has imposed exile upon himself for the sake of the nation and his country. Albayrak further argues that the developments of the last three months prove that the calls asking for his return were not sincere.

Albayrak submits that it is not possible to initiate an investigation into Gülen’s alleged illegal activities based on unsubstantiated news reports, recalling that the requirements for such an action are specified in Article 160 of Turkey’s Code on Criminal Procedure (CMK). If an investigation is initiated without considering the legal requirements, some concrete supporting evidence should be sought. Albayrak argues that there is no such evidence. He further notes that they have relied on all legal means, including judicial complaints, issuing responses and filing lawsuits for non-pecuniary damages, and that they are working to prove that these reports are fabricated by the verdict of a court of law. Albayrak believes that an investigation based on false reports would be a disgrace to the state and the government. The prime minister’s remarks that they will deal with this so-called parallel structure by any means possible imply that an investigation will be initiated without considering whether or not it is legally justifiable.

Asked how Gülen would respond to this campaign, Albayrak says they will exercise their legal right to prevent the moves of these aggressors. He recalls that they have filed 279 criminal complaints and 64 lawsuits for non-pecuniary damages and issued 25 responses to and 23 statements against the allegations. Recalling that Gülen was charged by Nuh Mete Yüksel, the chief prosecutor of the State Security Court, with attempting to create a theocratic Islamic dictatorship by promoting Islamic codes within the state system, Albayrak notes that Gülen was acquitted of all charges in the indictment by the Supreme Court of Appeals. He further concludes that it is not legally possible to initiate another case, given that Gülen was acquitted of all similar charges before.