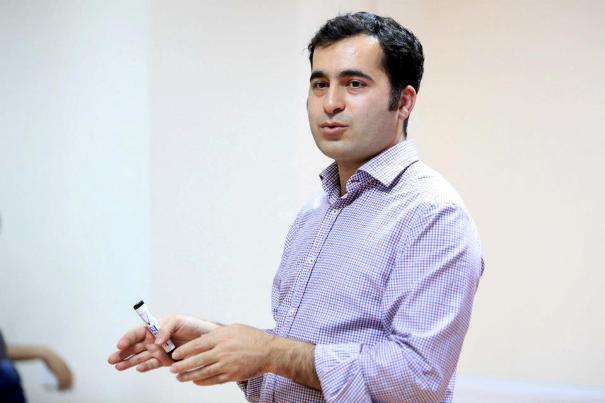 Azerbaijani civil society organizations have spoken out in defense of Today’s Zaman reporter Mahir Zeynalov, an Azerbaijani national, who was deported by the Turkish government for anti-government tweets that, in a criminal complaint filed by Prime Minister Recep Tayyip Erdoğan, were dubbed “defamation and inciting public hatred.”

Zeynalov was deported after he showed up on his own initiative at Istanbul’s Atatürk Airport early in the morning to board a plane to Baku on Friday; he left before the police could show up at his apartment. Zeynalov was deported after the Prime Ministry Coordination Center (BİMER) decided that he was using his Twitter account to spread “statements contrary to the facts.”

In his complaint over tweets Zeynalov posted on Dec. 25, 2013, Erdoğan said the tweets included “heavy insults and swear words in a bid to provoke the nation to hatred and animosity.” The complaint also says that the Today’s Zaman journalist “committed a crime by exceeding the limit of criticism.”

Bakhtiyar Hajiyev, founder of the youth group Positive Changes, said in an interview with Today’s Zaman that Zeynalov’s deportation from Turkey has the potential to damage the country’s international reputation.

“For democratic countries, freedom of speech is the main pillar of free media. We cannot speak about stable democracy in states where this pillar is not strong. The governments who are shaking this pillar might cast a serious shadow over all of the positive work they have been doing for a long time,” Hajiyev said.

“It is the journalist’s job to research, investigate and criticize,” Hajiyev continued, “and it is up to the people to decide whether the journalist is right or not.”

“A government that is confident in itself and trusts in its people’s support will not prosecute or deport a journalist who is criticizing it,” Hajiyev said, urging the Turkish government to reverse its decision to deport Zeynalov.

“Instead of deporting the people who are voicing critical views of the government, the Turkish government should have thought about its wrongs. [Officials] should think, ‘What mistakes did we make? What have we done that the number of people criticizing us and parting ways with us is increasing?’” Hajiyev said. He went on to recommend that the Turkish government correct its mistakes as soon as possible.

Zeynalov was escorted by police as he left the country. Family considerations led him to return to Azerbaijan, but he plans to later relocate to another country.

“We expect much more from Turkey. Seeing regulations in Turkey that are incompatible with the country’s culture of democracy — in a country that is determined to lead the Turkic states –astonishes us,” Memmedli said. He added that Azerbaijanis are unable to make sense of Zeynalov’s deportation. Memmedli said the Turkish media should seriously react to the case.

Zeynalov has been placed on a list of foreign nationals who are barred from entering Turkey.

A day after Zeynalov was deported to his native Azerbaijan, the Institute for Reporters’ Freedom and Safety (IRFS), an Azerbaijani NGO, made a harsh statement condemning the harassment and legal persecution of the Today’s Zaman journalist and urging Erdoğan and his government to accept criticism in the press and refrain from using the law against journalists.

“The deportation of the Azerbaijani journalist Mahir Zeynalov from Turkey is further proof of the Justice and Development Party’s (AKP) increasingly aggressive crackdown on independent media and freedom of expression,” IRFS said in a statement from Baku on Saturday.

Calling the incident a serious risk to media freedoms in Turkey, the organization said, “The charges against journalist Zeynalov must be dropped and all necessary conditions must be created for him to continue his journalism in Turkey.”

The IRFS also called on the President Abdullah Gül to veto a bill to change Turkey’s Internet law that they say violates the Constitution as well as international conventions that Turkey has signed.

Zeynalov’s deportation coincides with the Internet bill, which could enable censorship and has caused alarm both at home and abroad.

Observers are saying the new Internet law is a sign that Erdoğan is trying to prevent more stories about the corruption scandal that has rocked the country since December from reaching international media.

The law to curb the Internet was sent to Parliament as the graft scandal, which erupted on Dec. 17 with the arrest of businessmen close to Erdoğan and three ministers’ sons, gripped the country. Erdoğan has described the investigation as a plot against him by followers of Fethullah Gülen, an Islamic scholar who lives in the United States.