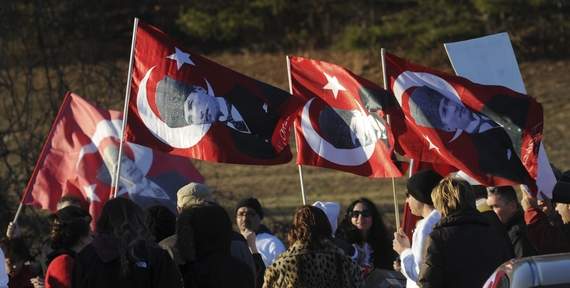 As a corruption investigation embroils the prime minister of Turkey and the country’s ruling party, protesters descended for a third time on Saylorsburg against Turkish cleric Fethullah Gülen.

Gülen has lived at the Golden Generation Worship and Retreat Center in Saylorsburg for more than a decade, but remains mostly unknown to Americans. For Turks, he is a prominent figure who many believe promotes education and a moderate, peaceful form of Islam.

Gülen and the large movement he inspired remain at the center of discussion about Turkish politics, though his followers say he is non-political.

In the last few weeks in Turkey, an extensive scandal has engulfed Prime Minister Recep Tayyip Erdogan.The Associated Press reports that revelations of bribery and illicit money transfers to Iran are threatening Erdogan and his government.

Ties between Gülen’s movement and Erdogan have been broken, with conspiracy theories pointing to the Gülen as the force behind the investigation, the AP reports. Though the evidence for Gülen’s involvement in the investigation is weak, his movement’s influence in the country seems clear.

When protesters arrived at the Gülen center last summer from across the U.S., many said they believed Gülen is the puppet-master behind Erdogan.

Saturday afternoon, first in Brodheadsville then at Ross Township’s Van Buskirk-Haney Park, about 40 protesters said they organized for the third time because of the scandal. Although the investigation appears to divide the two figures, they claimed it is little more than a power struggle between them.

“That’s the reason we want them to go together, because they are both dangerous movements for Turkey,” protest organizer Armagan Yilaz said through translator Banu Saker.

“They are both on the same side,” added Saker, who came from Virginia.

Protesters carried a makeshift coffin with photos of Erdogan and Gülen, singing and chanting throughout the peaceful protest.

But Alp Aslandogan, spokesman for Gülen’s movement, said the protesters’ views are contradictory. He said Erdogan has blamed Gülen for the investigation, so protesters are supporting the ruling party by protesting Gülen now.

“Their action aligns them with them, although their rhetoric is against them,” he said Saturday.

Aslandogan said the scandal is not a power struggle between the two figures, but rather an example of corruption properly coming to light.

“He definitely supports the values of government transparency and accountability, and checks and balances in the government,” Aslandogan said of Gülen.

Aslandogan provided a link to an article apparently written by Yilmaz, which lists the U.S. among Turkey’s enemies. Yilmaz has denied the protests are anti-American, and said they are aimed at raising awareness about the Gülen movement’s activities, including its involvement in U.S. charter schools, among Americans.

Aslandogan also pointed to a section of the group’s Facebook page, which quotes from a blog that appears to praise Erdogan for standing “on Turkish soil with Turkish citizens who are fed up with Gülen’s influence and corruption.”

Still, Aslandogan said the center supports the right of the group to protest peacefully.

Protesters said they will continue to come to Saylorsburg as long as Gülen remains.

“We are just trying to warn the American people,” Saker said.