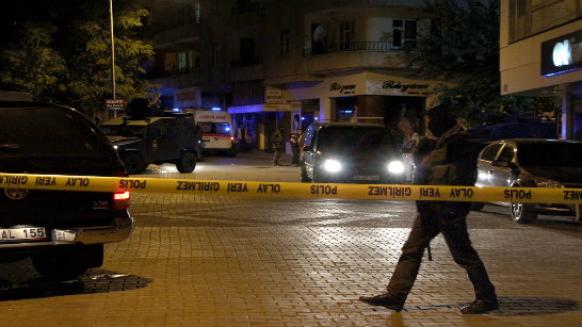 A Twitter user known by the pseudonym of Fuat Avni — a whistleblower who says he is among President Recep Tayyip Erdoğan’s inner circle — wrote on Tuesday, “[National Intelligence Organization (MİT) Undersecretary Hakan] Fidan’s team at MİT is preparing to secretly place weapons in houses affiliated with Hizmet so they can say they seized weapons at the movement’s houses.”

Bingöl Police Chief Atalay Ürker, Deputy Police Chief Atıf Şahin and Hüseyin Hatipoğlu, a police officer charged with protecting them, came under fire while inspecting shops damaged in protests that swept through Turkey’s predominantly Kurdish southeastern region last week. Şahin and Hatipoğlu were killed in the attack while Ürker was seriously wounded and remains in hospital.

Another tweet posted on Monday night said: “First [the government] banished the police officers to Bingöl on charges of being linked to the parallel state. Then they killed them and claimed it was the movement who killed them.”

In a subsequent tweet, Avni claimed the Kurdistan Communities Union (KCK) has also gone to great lengths to place blame on the movement regarding the unsolved murders and lawlessness.

“In time, the KCK will claim that Gülen is responsible for every single clandestine organization within the state,” Fuat Avni posted.

Fuat Avni’s identity is unknown and has prompted wide speculation, but the account has previously revealed numerous details that would appear to indicate that the user is close to or inside the government and the account has attracted a large following. Moreover, an armed wing of the Kurdistan Workers’ Party (PKK), the People’s Defense Forces (HPG), released a statement denying any link to the Bingöl attack. The HPG stated the group never gave any orders to attack state forces or any other groups, adding, “The violent actions, primarily the Bingöl incident, are local; and we, as the HPG, have nothing to do with them.”

Meanwhile, eight people were detained in the central province of Kayseri on Saturday over their suspected involvement in the Bingöl attack. Seven of them were later released after questioning at the police station early on Sunday. The court also issued a publication ban on the issue for the sake of the ongoing investigation. But many public press organizations criticized the ban, claiming that the real aim behind the decision is to conceal the reality from the public.

The family of assailant Erhan Şenyuva — whose body went missing after he was killed in a police operation following a deadly attack on a police team in Bingöl last week — filed a request on Wednesday to Turkey’s Human Rights Association (İHD) to find Şenyuva’s body.

News reports said four people believed to be assailants in the attack were killed in a shootout with the police after they ignored a warning to stop their car near the district of Genç, nearly two hours after the attack in the Bingöl city center. However, the body of one of the assailants, 36-year-old Şenyuva, has been missing since the incident, according to his family.

According to a statement released by the İHD early on Wednesday, the family of Şenyuva filed a request to the association, saying; “ Şenyuva’s body was not at the institution of forensic medicine, although the Ayranlı gendarmerie station command stated that he was killed in a shootout.”

There is still confusion as to the number of those killed in the car, with Interior Minister Efkan Ala later saying the number of “terrorists” killed was five, implying that the men in the car were terrorists from the Kurdistan Workers’ Party (PKK).