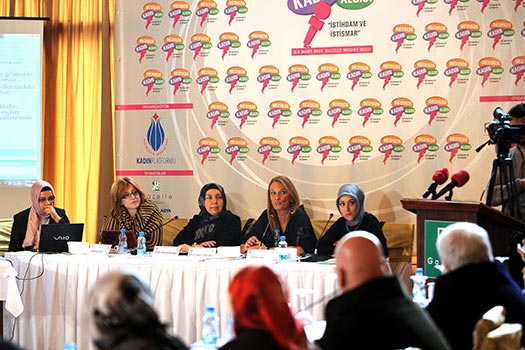 The government should take a more active role in preventing domestic violence — which is on the rise across Turkey and the world — stated the final declaration of the conference on violence and society organized by the Journalists and Writers Foundation‘s (GYV) Women’s Platform between Nov. 24 and 26 in İstanbul.

The international conference, titled “Family and Community Violence,” was held at the Harbiye Congress Center. Thirty academics from 15 countries attended the three-day conference.

In the final declaration released on Monday, the experts agreed that the government should be more active in the elimination of domestic violence in Turkey, pointing out that just adopting legal measures is not sufficient. The declaration states that the family is the most important institution of society: “The emergence of violence in society threatens the family as well. We believe that the family can be the primary institution to prevent violence, and so it must be supported,” and “To protect the structure of the family and in order for the family to carry out its functions, the state must play an active role.”

The declaration states that the government should provide mandatory psychological therapy and support to perpetrators of violence, open both public and private therapy and counseling centers, and employ experts (preferably female) on family matters in the police and military police departments, which are often the first places victims of domestic violence are seen.

Speaking during the last session of the conference on Monday, Professor Nilüfer Narlı, chair of the department of sociology at Bahçeşehir University, said that whatever legal measures are adopted in order to prevent domestic violence, it will be impossible to eliminate domestic violence unless traditional social attitudes and beliefs about women change. “Most men are not aware that violence against women is a serious violation of human rights. I don’t think it is very effective to send men who commit acts of domestic violence to three month rehabilitation programs. This kind of education should start at an earlier age to enable men to internalize the fact that committing acts of violence on their wives is a violation of human rights,” Narlı noted.

“According to a 2008 report released by the Women’s Status General Directorate [KSGM] of the Ministry of Family and Social Policy, 39 percent of women in Turkey have been exposed to physical violence, while 15 percent of women say they have experienced sexual violence, and 42 percent say they have been exposed to both types of violence at the same time. One out of every four women living in Turkey is injured during a domestic violence incident, and even more alarming, one in 10 women says that she was exposed to domestic violence while pregnant,” Narlı said.

‘Drug and alcohol are among primary domestic violence problems’

Speaking at the conference, İlhan Yargıç, a professor from İstanbul University, focused on the adverse impacts of drug and alcohol use on the structure of the family and the community as a whole. Noting that there is substantial research that shows that alcohol and drug use are related to violence and aggression, Yargıç stated: “A 2010 report prepared by a sub-commission of the parliamentary Human Rights Commission showed that smoking, drinking alcohol and drug use caused young people to engage in and be exposed to violence. Research of children in penal institutions revealed the following use of these substances: 40.2 percent smoke cigarettes; 41 percent consume alcohol; 3.3 percent use volatile substances such as thinner, gum and glue; 7.9 percent use narcotics or other pleasure-inducing substances; and 32.3 percent use two or more substances at the same time.”

“In other research, it has been stated that 54 percent of the people who committed a crime after drinking alcohol killed people; 19.5 percent of the people who committed crimes and were taken to Bakırköy Psychiatric Hospital for evaluation have been reported to have alcohol and drug use disorders,” Yargıç said. He added: “Alcohol is one of the primary domestic violence problems. Parents, siblings and children of people who use alcohol and drugs are affected in different ways. There are some studies that have shown that even a small amount of alcohol may affect the fetal development or life of that child. Alcohol abuse may cause violence and there may be sexual and physical harassment in the family. In most cases of paternal incest, the father who harasses his child is an alcohol addict. Alcoholism is four times more likely to see be seen in children of alcoholics.”