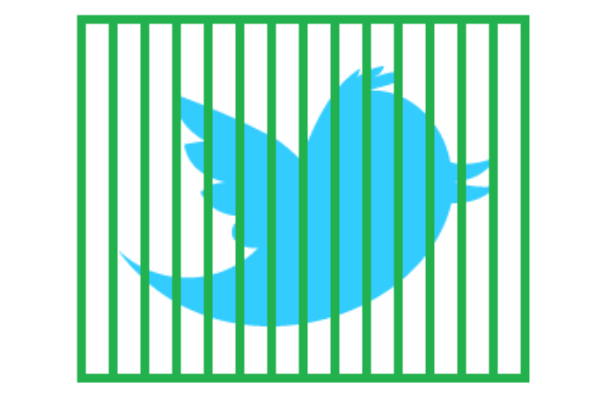 “The cell phones you have now have more computing power than the Apollo space capsule, and that capsule couldn’t even Tweet. So just imagine the opportunities you have in that sense,” Fareed Zakaria, opinion writer for The Washington Post, once said in a commencement speech at Duke University.

I cannot agree more with Zakaria. Twitter is a great source for news and a broad platform for discussion on different issues. I like Twitter’s little blue bird logo, which represents freedom of expression. However, some want to place that little blue bird in a cage in Turkey, while speaking Turco-Tweetish, on the other hand, is a trend on the rise nowadays.

According to research company eMarketer, Turkey has the highest Twitter penetration in the world. While Turkey’s Internet population is 36.4 million, its Twitter users are estimated at 11.3 million, giving a Twitter penetration rate of 31.1 percent. Turkish users have further extended these numbers recently.

Certainly, Twitter’s importance as a tool for freedom of speech was confirmed last spring in the Gezi Park protests in Turkey, when a civil movement emerged against Prime Minister Recep Tayyip Erdoğan and the Justice and Development Party (AK Party). Many people used Twitter to share photos and videos of what was happening in Turkey and to distribute their opinions and messages about the situation. Thus, Twitter attracted Erdoğan’s attention, and he declared it a “menace.”

Then, there has been an enormous campaign on Twitter to criticize other plans of the Turkish government. It started in November 2013 when the government attempted to close down exam preparatory schools, then rose with the corruption investigation after Dec 17. Volunteers from the Hizmet movement are overseeing the campaign by introducing followers to a trending topic with a new hashtag every day, and since the Hizmet movement has active members in more than 150 countries, their actions on Twitter have exploded.

While this explosion was shaking the world, last Friday Turkey deported Azerbaijani journalist Mahir Zeynalov for “posting tweets against high-level state officials,” according to an Interior Ministry order obtained by Today’s Zaman. Also according to Today’s Zaman, Zeynalov was “put on a list of foreign individuals who are barred from entering Turkey.” This happened a month after Erdoğan filed a criminal complaint against Zeynalov for tweeting links to articles about a corruption scandal involving Erdoğan’s government. The complaint claims that Zeynalov “committed a crime by exceeding the limits of criticism.”

Technically, Zeynalov’s deportation is perhaps the first instance of a foreign journalist’s being uprooted from Turkey. However, it might not be the last. After Zeynalov’s deportation, Hayko Bağdat, a columnist at the Taraf daily, tweeted: “If the Turkish government has deported Mahir Zeylanov, it has intimidated all foreign journalists in Turkey. Bravo. We are on a good path.”

The deportation of the journalist, on the other hand, came after Law No. 5651, which was passed last Wednesday and which enables the authorities to block websites and track user information without court decisions. This has prompted international human rights organizations such as the Committee to Protect Journalists (CPJ), Freedom House, Human Rights Watch (HRW) and Amnesty International to call on President Abdullah Gül to veto the measure.

The law is not compatible with international standards on the right to freedom of expression. Since the Internet is designed to provide editorially free media, when authority seeks to suffocate this opposition it only shows how helpless it is. They can put a little bird in a cage for a while, but human history shows us that wisdom, belief and the desire to discover cannot be caged by authority. For how long can they imprison the truth? They must understand that their first priority should be to provide full access to all information that would educate the public, while learning to choose right from wrong informs the public.

I remember once reading Dick Costolo, Twitter’s chief executive officer, in the Financial Times, saying, “The reason we want to allow pseudonyms is there are lots of places in the world where it’s the only way you’d be able to speak freely.” So to be able to speak Turco-Tweetish freely do we need a fake photo and a pseudonym? If it’s the case, start thinking about what you want your pseudonym to be now.