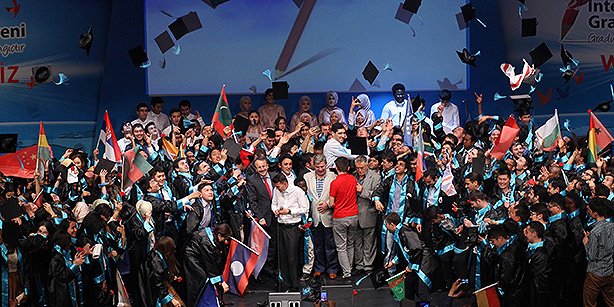 The ceremony was organized by the Baran International Student and Cultural Federation. Turkish basketball star Enes Kanter, known for his previous success in the NBA, attended the ceremony as a guest on Wednesday. A group of 206 mothers from 66 countries and whose children are studying in Turkey also participated in the ceremony, having celebrated Mother’s Day earlier in İstanbul.

The graduation was held at the Türker İnanoğlu Maslak (TİM) Show Center on Wednesday, and was hosted by the famous TV presenter Kemal Gülen. In a display of cultural diversity, the students performed songs, poems and sketches on stage.

Speaking during the ceremony, Kanter said he hoped the students will take love, respect and service back to their own countries from Turkey, adding, “I want to express my gratitude to the teachers for their contributions, and to those involved in the organization of such meaningful events.”

The same federation had brought the 206 mothers together in İstanbul as part of the three-day Mother’s Day celebration that begun on Sunday at the same location. Sunday’s program was organized by a committee headed by journalist Nazlı Ilıcak and featured the mothers’ children, middle and high school students, performing plays, singing songs and reciting poems. Journalist Suna Vidinli and Nationalist Movement Party (MHP) deputy Meral Akşener also participated.

The Mother’s Day celebration concluded with a boat trip on the Bosporus on Tuesday. During the tour, the mothers had the opportunity to take photos of famous residences and historic buildings along the Bosporus Strait, such as the Ortaköy Mosque, the Rumeli Hisarı fortress and the two bridges linking Europe and Asia.