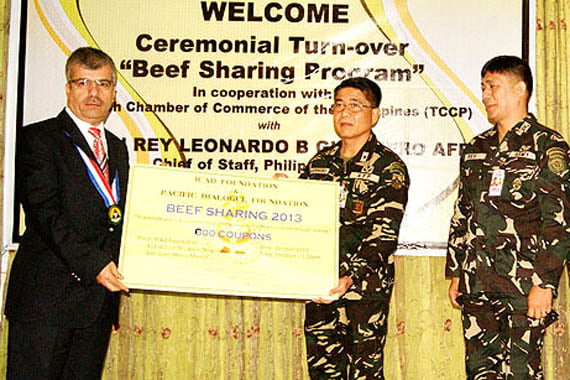 The Philippine army chief has honored Turkish Islamic scholar Fethullah Gülen with a special award for the charity activities and contributions to peace of the faith-based Hizmet movement.
Philippine Chief of General Staff Gen. Leonardo B. Guerrero said during a beef-sharing ceremony that the army is grateful for the important activities of the Hizmet movement with the inspiration of Gülen.

The ceremony, jointly organized by the Phillipines Chamber of Commerce, Turkish schools in the country and the General Staff, took place at First Army Command Headquarters.

Philippine commanders said in their speeches that they were pleased with the activities of the Turkish community in their country and stressed what they called Gülen’s “exemplary” understanding of tolerance and charity.

Col. Burgos also expressed his gratitude to Gülen for his contributions to peace.

Army chief Guerrero told the private Cihan news agency after the ceremony, which was organized to donate meat to poor families, that Gülen not only provides “us [with] an example of generosity” but also helps Turkey and the Philippines understand each other well.

Turkish intellectual and scholar Gülen was recently awarded the Manhae Peace Prize for his contributions to world peace at a ceremony held in South Korea.

Gülen is a Turkish Islamic scholar well known for his teachings promoting mutual understanding and tolerance between cultures. Now residing in the US, he has pioneered educational activities in a number of countries, along with efforts to promote intercultural and interfaith activities around the world. He has written nearly 50 books in Turkish, some of which have been translated into several languages.

Bülent Korucu April 8, 2012, Sunday James C. Harrington has a brilliant career as a lawyer who has practiced for 40 years and as a professor who has taught law in universities for 25 years. But what is even more important is his sensitivity to and struggle for human rights. He is one of the […]