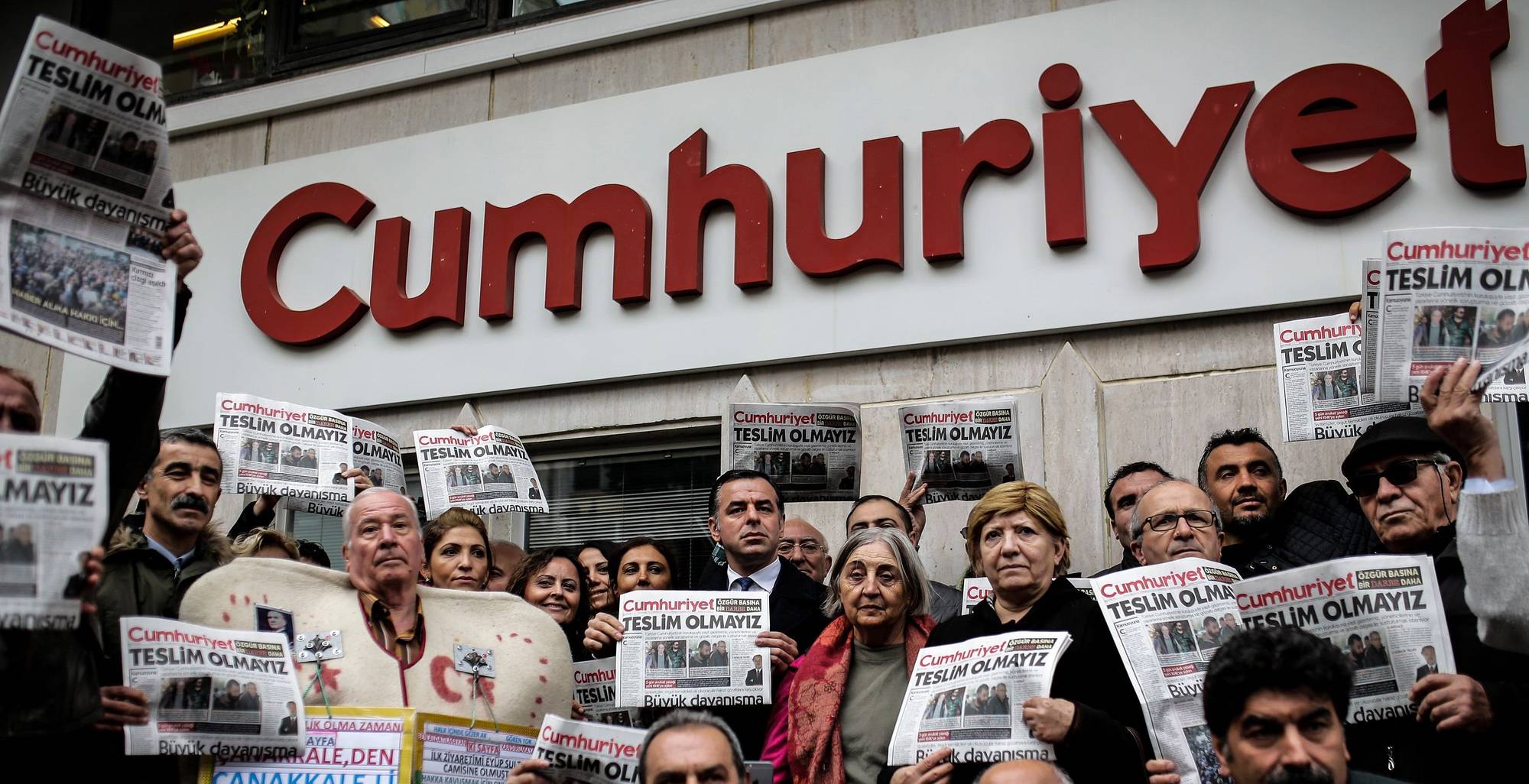 Protesters hold copies of the latest edition of the Turkish daily newspaper "Cumhuriyet" during a demonstration in support to the Cumhuriyet in front of its headquarters in Istanbul on Nov. 1. PHOTO: AGENCE FRANCE-PRESSE/GETTY IMAGES

Ankara uses July’s coup as a pretext to crack down on journalism.

Another day, another mass arrest in Turkey. At least 13 journalists were taken into custody in predawn raids Monday morning, including Murat Sabuncu, the editor of Cumhuriyet, the country’s leading secular newspaper. That follows the weekend closure of the country’s only Kurdish-language daily. The government has shuttered at least 120 news outlets since July’s failed military coup.

The government insists the closures are a response to that coup, in which some 300 people were killed. The claim would be easier to credit if President Recep Tayyip Erdoganhadn’t spent his 14 years in power tightening restrictions on news and social media. Can Dündar, Mr. Sabuncu’s predecesser at Cumhuriyet, was arrested last year and sentenced to nearly six years in prison for publishing a story detailing alleged weapons’ transfers by Turkish intelligence to Islamist radicals in Syria. Freed on bail, Mr. Dündar now lives in Germany.

Similar fates have befallen scores of other Turkish journalists before and after the coup. Another 2,500 have lost their jobs. They join the ranks of 100,000 school teachers, judges, university professors and military officers who have been dismissed on suspicion of being insufficiently loyal to Mr. Erdogan, who now rules by decree. Thousands more have been sent to prison in the largest mass purge the world has seen in decades.

The Obama Administration has been mostly quiet throughout this crackdown and continues to entertain Ankara’s request to extradite Pennsylvania-based Muslim cleric Fetullah Gulen, the coup’s supposed mastermind. Turkey is a member of NATO and both the U.S. and the European Union believe they need Ankara to fight Islamic State in Syria and curb the flow of refugees to Europe.

Maybe so. But that does not relieve the West from the obligation of denouncing Mr. Erdogan’s repression. Mr. Gulen should not be extradited so long as he cannot expect a fair trial in Turkey. And Turkey should not remain a member of NATO if Mr. Erdogan continues on his increasingly lawless path.