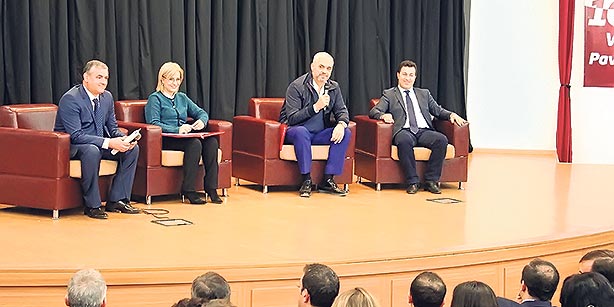 Albanian Prime Minister Edi Rama speaks to students during his visit to a Turkish school in the Albanian city of Korca, in this Dec. 20, 2014 file photo. (Photo: Cihan)

There are no Turkish schools among the 13 schools that have been closed in Albania since last year.

Once a champion at promoting more Turkish schools abroad, personally inaugurating some, including in Albania, Erdoğan has now become an avowed enemy of these schools established by non-governmental organizations and volunteers from Turkey.

While in Tirana as part of an official visit to the small Balkan country on Wednesday, Erdoğan called on Albanian authorities to close Turkish schools there, some of which were opened during the 1990s at a time of political turbulence and instability in the country that barely avoided a civil war. Erdoğan’s current unyielding war against Turkish schools in Albania contradicts his previous attitude. It was Erdoğan who inaugurated one of the schools, Turgut Özal College’s elementary school, on Feb. 17, 2005, during an official trip when he was prime minister of Turkey.

Not only did Erdoğan endorse the opening of schools in Albania by Turkish civil society, but other Turkish officials such as then-President Abdullah Gül and Parliament Speaker Cemil Çiçek also gave their full blessing to such efforts. Turkish officials have seen these schools as bridges with Albania that could facilitate strong ties with the Balkan country.

Gül attended the groundbreaking ceremony of Epoka University in Tirana in 2009, while Çiçek visited major Turkish schools in the country in 2012. Both leading figures expressed their support for the schools, which they regarded as basis for strong cultural bonds between Turkey and Albania. What is more striking is the fact that the presidential website of Turkey still features Gül’s landmark attendance at the ceremony with dozens of photos detailing scenes from his 2009 visit.

“Turkish educational institutions in Albania are good examples of fraternity” reads a title on the website and delves into details of Gül’s visit. “Drawing attention to the historic relations between Turkey and Albania, President Gül declared in his speech that their mutual trust would continue and said he was proud to see the peoples of the two countries contributing to the solidarity of both states, adding: “These schools are the best gift that Turkish businessmen have given to Albania,” a bulletin prepared by the press office of the presidency reported on the website.

Against this backdrop, Erdoğan’s current efforts to label schools as having been formed by a terrorist organization, a reference to the Hizmet movement — a faith-based movement inspired by Turkish Islamic scholar Fethullah Gülen that has built hundreds of schools across the world to promote education with the aim of facilitating inter-faith and inter-cultural dialogue — created uneasiness and stirred up a backlash from Albanian politicians.

Jarred by Erdoğan’s call, several Albanian lawmakers dismissed Erdoğan’s portrayal of the schools as being created by a terrorist organization, and have said that the schools provide a high quality education that is essential for the development of the country.

Ben Blushi, a deputy from the ruling the Socialist Party of Albania (PS), which came to power in 2013, speaking in a parliamentary session on Thursday, called on the government to reject Erdoğan’s request.

“Albania is not a province of Turkey,” Blushi said, and stressed that internationally recognized terrorist organizations are only determined by UN Security Council (UNSC) resolutions. “No country’s president can ask for such a thing [labeling a civil society movement a terrorist organization] while on his visit to another country.”

To Blushi, Erdoğan asked for a gift from Albanian authorities in return for the construction of the Namazgah Mosque in Tirana. “I have not seen a terrorist organization that killed anybody so far. I have never seen the Gülen [Hizmet] movement kill somebody. Those schools that Erdoğan seeks to close down have contributed to education at thousands of schools in Albania,” he said.

Former Albanian Economy Minister Arben Malaj also joined the recent discussion through a social media account, calling for a clarification from the Albanian president about Erdoğan’s request. Malaj emphasized that the Hizmet movement is not on the UN’s list of terrorist groups and stressed that shutting down the Turkish schools in Albania in return for investment by Erdoğan’s administration means the export of Turkey’s domestic problems to Albania. The Turkish economic presence in Albania could be worth something, but Turkey cannot be a model for Albanians on the democracy front, Malaj argued.

Ilir Kulla, who acted as an advisor to the Albanian president from 2007 to 2010, has said that the Turkish schools have been operating in Albania for 25 years and have proven their quality.

“There is a need to be realistic. The Albanian state has to show respect for the law. These schools have been operating for 25 years in the field of education, and their quality and the quality of their students is extremely high. These institutions pay their taxes to the state and provide education in line with the laws,” he said in remarks to Today’s Zaman on Friday, in open rejection of Erdoğan’s characterization of the schools. “We respect Turkey and Erdoğan, but we have no reason to close these schools.”

Nothing is more telling than Erdoğan’s recent call to lawmakers of the Balkan country in revealing the scale of his continuing crackdown on civil society movements that refuse to toe the line with the ruling party’s ideological orientation or the government’s political identity.

The Turkish president has extended an unflinching crackdown on the Hizmet movement beyond the borders of his country and launched a relentless campaign to close any institution, association or school, he considers to be linked with the Hizmet movement, wherever they might be located, be they in Europe, Africa, or Asia.

Erdoğan accuses the Hizmet movement of orchestrating a corruption investigation of the government during his premiership in late 2013, a claim which has been strictly rejected by both Gülen and the movement itself. Despite relentless tirades, Erdoğan has so far failed to back his claims with any substantial evidence.