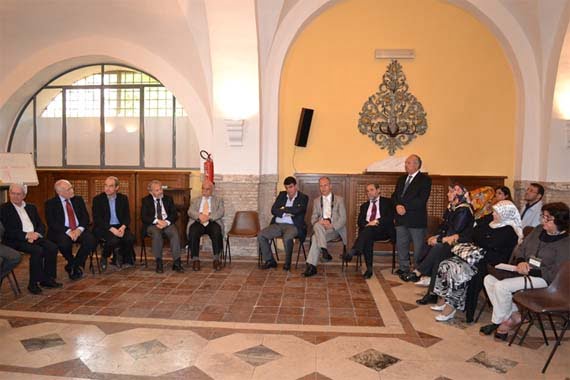 Having greeting the Turkish delegation with the words “Welcome to Rome! We are delighted to see you here”, the Italy secretary general of Religions for Peace, Dr. Luigi De Salvia, went further to say, “Dialogue has been recently developing in Italy. Pope John XXIII, who is familiar with the dialogue tradition rooted in the Ottomans, is an instrumental figure in the field. The Turkish experience played a role in the initiatives of the Catholic Church. Through this step, the Church has expanded into the Jews, Muslims and Hindus.”

In briefing on his institution Religions for Peace, De Silva noted that religious freedom is explicitly stated in the Italian constitution and that they have been making effort for this right to be more justly exercised in contexts including hospitals and prisons. “Through these efforts, we are seeking to curb the clashes in society. We have been enjoying the fruits of our labor and working tangibly for peace. The theme of the coming November meeting is going to be “to recognize the outsider and to say ‘welcome’ ” Dr. De Silva said. “We would like to say “Welcome” again and listen to you”, he added.

“Dialogue is to know one another”

JWF Vice-President Cemal Usak, in his speech at the panel, said dialogue is to know one another. Noting that one can get to know his addressee through “similarities, dissimilarities and common grounds”, Usak said, as JWF, they have been making efforts to communicate “peaceful coexistence” message across Turkey for 20 years. Arguing that NGOs engaged in dialogue should collaborate against the threats challenging the humanity, Usak maintained that cautions have to be taken particularly against the West-rooted notions; “aggressive secularism” and “alienation from religion and religious values”. “Proceeding from dissimilarities and common grounds, we can come to realize our similarities and highlight them. Throughout the history, wars targeting dissimilarities have been fought. We can carry out projects to enrich the shared values” Usak said. He additionally noted that, collaboration among pro-coexistence institutions in the fight against Islamophobia in the West, Christianophobia in the East and Anti-Semitism in some regions is crucial to the world peace.

The president of Pontifical Institute of Arab and Islamic Studies, Prof. Francesco Zannini, who, he says, has been involved in dialogue activities by the Catholic Church for 60 years now, said, “I have worked on various religions for 30 years and learned a lot. There are so many ways of dialogue. Making acquaintance, getting to know each other and the experience of coexistence. This is the essence of dialogue. Moreover, there is a spiritual type of dialogue. The factor that binds us together and makes us brothers, as believers, is our commitment to God. Together with Muslims, Buddhists and Jews, in particular, we should form dialogue recognizing identities without interfering in anyone’s belief and live together as brothers, so peacefully to embrace those with no religious affiliation.”

A history of religions academic Prof. Omer Faruk Harman, having noted that he’s been teaching Christianity, Judaism and Islam, said ” How to treat each other, love and respect are narrated in Jesus’s Sermon on the Mount. Yet, wars have always existed throughout history. Jesus urged: “Love your enemies.” In God’s commandment to Moses, it says “You shall not kill” and to break one’s heart is equivalent to killing him. Despite the Bible’s commandment, St. Bartolomeo, in reference to the ages-long religious wars in the West, said “It is impossible to understand the Crusaders.” There have been conflicts and enmity among the religions, throughout history. Can a friction or clash even exist among the prophets Abraham, Moses, Jesus and Muhammad? While no enmity exists among the founders of these religions, what is it that people have been fighting for throughout history?”

We should think highly of each other. Torah orders: “Love you neighbor.” Our duty is therefore to practice the fundamental rules in the holy books. The same rules, such as “You shall not steal, commit adultery and kill” are available in the New and Old Testament as well. Muslims are also subject to the same Noah’s rules mentioned in the Qur’an. The Qur’an encourages competing in good deeds and so do the Bible and Torah.”

The secretary general of Turkey’s Chief Rabbinate Yusuf Altintas argued that only the interreligious aspect of dialogue had been discussed at the panel up to that point. “I believe the concept should involve other issues too besides religions” he said. Suggesting that dialogue is an option, Altintas defined the option in question as “an option that requires people to respect each other just because they are human beings.” Altintas said the second option will inevitably be the opposite of the first. “The point here is to get them choose by presenting options rather than begging “to get to know each other”, through well-intentioned approaches” he said.

Dogus University professor Niyazi Oktem stated, in his remarks, that it was the Kurdish intellectual, Said Nursi, who pioneered dialogue in the Republican period in Turkey. Oktem said Nursi visited Patriarch Atenagoras in 1950s and called all religions to take a united stance against communism and problems. Following Nursi, Mehmet Firinci from the same school of thought carried forward the same notion. The Catholic Rev. Mons. Dubois in 1980s, on the other hand, elaborated on what could be done with respect to interreligious dialogue, and later became an apostolic and the Vatican representative to Turkey, according to Oktem.

“From 1990 onwards, dialogue was institutionalized and today’s Intercultural Dialogue Platform came into being, thanks to the initiatives of JWF Honorary President Fethullah Gulen. Consequently, joints projects have been carried out in cooperation with Msgr. Marovitch from the Catholic world, who had been following the footsteps of Dubois; alongside Armenian, Jewish, Assyrian representatives. For example, a joint prayer session was held following the attack on the Jewish synagogue. Msgr. Santoro’s sister Magdelena had earlier invited us here and another joint event in memory of Msgr. Santoro was held” Oktem said. Speaking of the importance of KADIP with respect to dialogue, Oktem quoted Patriarch Bartholomeos’s statement “If the non-Muslims in Turkey are able to retrieve their confiscated belongings today, KADIP has a major role in that.”

KADIP President Prof. Suat Yildirim said, “Some Said Nursi and Fethullah Gulen-affiliated friends came up and said: We have tried debating and challenging each other a lot, but not dialogue, in the history. Let us try the dialogue way with other faith members. God created all human beings honorable. Everyone is therefore in a search of the right and truth. So, they attempted to communicate with people through education, in particular. Schools have been founded in 140 different countries. These schools have directly made specific contributions to dialogue. For example, the Bosnia case. Since the war, Serbian, Croatians and Muslims have been living there. Students from diverse faiths are attending those schools and learning to live together.”

The president of Syriac Catholic Church Foundation Zeki Basatemir noted the past experiences in Turkey were negative but there has been a change for the better and they are hopeful that there will be progresses in the issue with the new constitution. Revealing that they were afraid to come to Anatolia with their patriarchs during its condition 20 years ago, Basatemir said they visited those regions through KADIP activities and were well-received by the locals.

Istanbul Deputy Mufti Kadriye Avci Erdemli said “Women are deemed important in every religion. The Qur’an says “O people!” which encompasses women, men and believers. All religions gained strength with women. For example, Virgin Mary or the woman who rescued Moses from the river or Khadijah. Yet, stressing that they cannot see a place for women in today’s religious structures, Erdemli said, “All religions promote peace. Islam means peace after all. It says: “To kill one man is to kill all mankind.” Women are more pacifist, which all statistics confirm. Women contribute to peace more” and underlined the need for more positions for women in religious structures and decision making authorities.

Although sick, American Jewish Committee Vatican Representative Lisa Palmieri Billig said, “I’ve got out of home for the first time to say welcome to you. I’m delighted to see this democratic atmosphere. I hope our friendship will continue.”

Bahai community official Guido Morisco said every county has a meaning in Baha’ism and “Turkey is said to play a role in peace building.” “Turkey’s plurality and openness gave me hope. I’ve seen Istanbul, Konya and some other cities. I admired the country’s trend towards advancement and the youth’s feelings about it” Morisco said.

The Jewish community official and a former deputy Enrico Modigliani said, “Rome’s Jews are the oldest Jewish community and had lived, until 150 years ago, in Roman Ghetto you saw yesterday. My grandfather was born there. That region was flooded when the river overflowed. There were two religions in Rome at the time; Judaism within Ghetto and Christianity outside. Today, there are 22 of them.” Modigliani went on to say, “Secularists too should be involved in this project. We should try to understand each other as we are. There are two obstacles to that; prejudices and fundamentalism. The role parents and schools play in this is significant.”

Source: Published [in Turkish] on KADIP, 5 June 2013. English translations is retrieved from Hizmetmovement.com