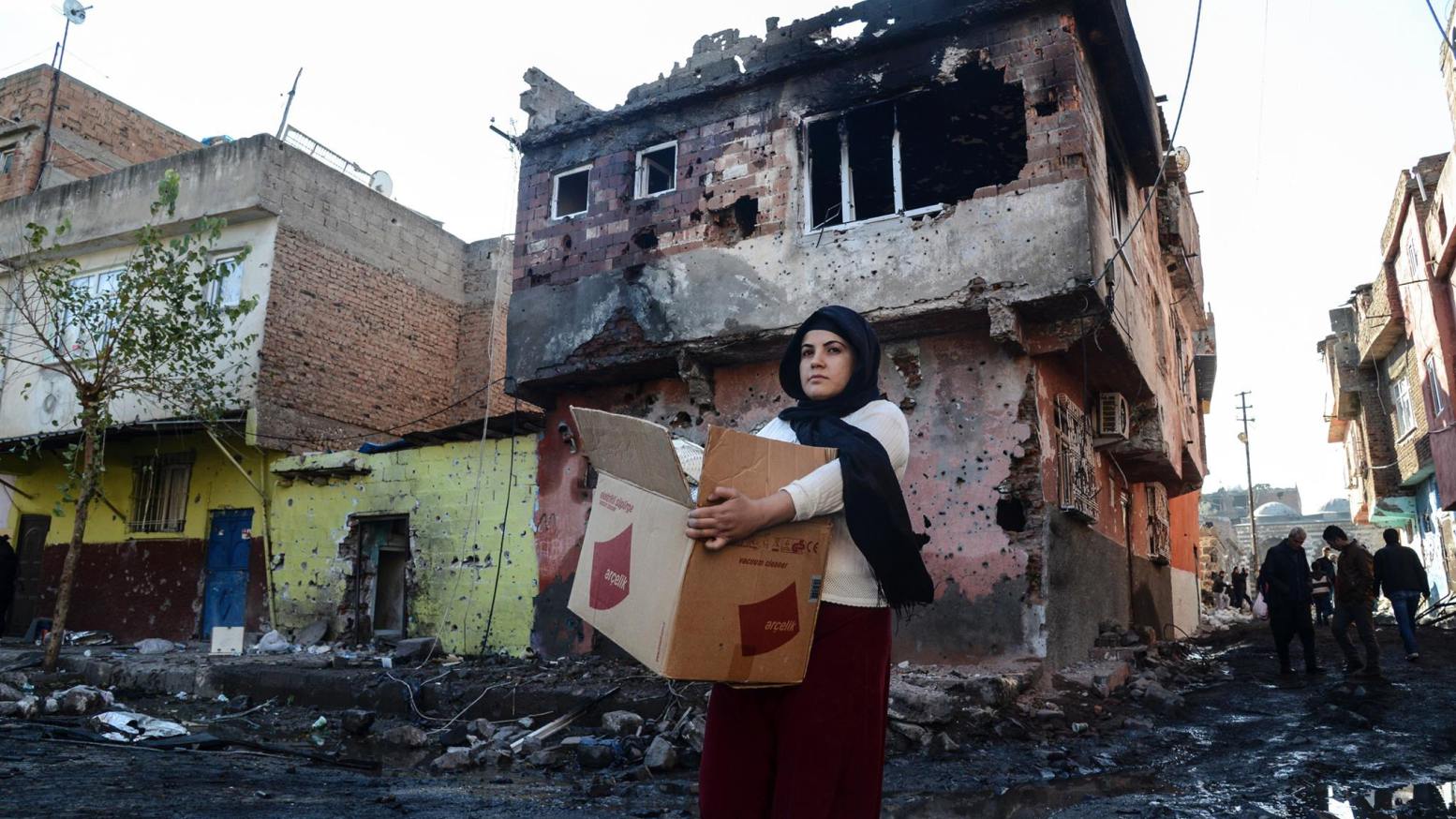 A woman carries her belongings in Diyarbakir's Sur disrict.

Many captured with cellphones the moment of shock and disappointment of people desperately seeking to pinpoint their houses through mountain of rubbles. Dozens of streets, many neighborhoods and thousands of homes, buildings were leveled to the ground after months of ferocious fighting between the army and Kurdistan Workers’ Party (PKK) militants in urban areas.

Amnesty International recently published a detailed report about the mass displacement of Kurds in Diyarbakir and offered a vivid account of “the desperate plight of families forces out of the historical centre of Diyarbakir,” Sur, the old part of the city.

The report came as hundreds of thousands of people have been internally displaced over the past two years across the region and need to adapt themselves to dire conditions as cold winter took rein in the region.

“Homes in the once-bustling district have been destroyed by shelling, demolished and expropriated to pave the way for a redevelopment project that very few former residents are likely to benefit from,” the report said.

“A year after a round-the-clock curfew was imposed in Sur, thousands of people displaced from their homes, struggling to make ends meet and facing an uncertain future in an increasingly repressive atmosphere,” John Dalhuisen, Amnesty International’s Europe Director, said over the mostly underreported issue.

He argued that forced displacement, which has devastated the lives of ordinary people, was little covered in the media while there was intense coverage of the crackdown against civil society in southeastern Turkey.

Several residents of Sur found their homes destroyed, belongings either possessed by authorities or burnt, when they returned to the area where they live after curfews lifted. Although clashes ended eighth months ago, the government does not allow residents return home, and some people who were able to somehow return to their neighborhoods, only to find their homes destroyed.

In return for their loss, residents who spoke to Amnesty International say they got little as compensation, far from what their property really worth.

Last year, a two-year fragile truce collapsed between the Turkish government and PKK militants after peace process launched by the authorities dramatically ended without substantial success.

PKK used that period to establish itself in cities and prepared for the day when the truce appeared to be bound to fail. Its decision to bring the war to cities also sparked resentment among Kurds who were used to support Kurdish political parties, and even tolerate PKK’s violent tactics against the state for its repression of the population.

“Shockingly, the desperate situation facing the displaced resident of Sur is mirrored in dozens of other districts across southeast Turkey. The government must act urgently to lift the curfew, ensure affected communities are fully compensated and either helped to return to what remains of their homes or, at the very least, to their neighborhoods,” the director told Amnesty International.