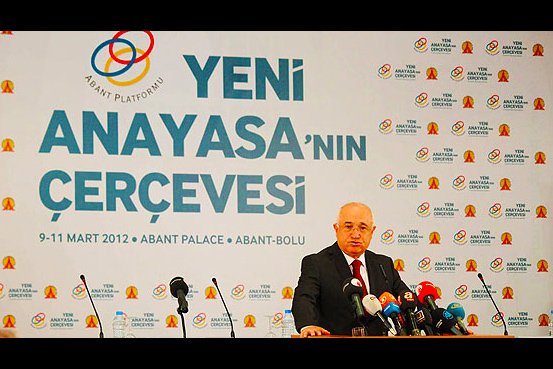 As this year’s Abant Platform tackles the pressing issue of shaping Turkey’s new constitution, a wide spectrum of intellectuals, lawyers, political leaders and journalists are discussing the problematic areas of, and proposing solutions to, the constitutional drafting process.

“Deliberations should continue with the spirit of respecting each other’s thoughts on a given topic. What I say might be right but what another person says might be right, too,” said Parliament Speaker Cemil Çiçek, who heads the parliamentary Constitutional Reconciliation Commission, at the opening of the 26th Abant meeting, held from March 9 to 11 in the northwestern province of Bolu. “Somebody says forget it if the constitution does not include a specific sentence. This is an aggressive attitude, not one of compromise. Everybody should think about what happens next in Turkey if no way of compromise is found. It would not be a process of positive development for the country,” he added. Çiçek said they are not giving directions at the commission about the way the constitution will be but collect thoughts and ideas. “It is not the commission but the people who should write the constitution. We are making it happen, not writing it,” he said, stressing the need for the four parties in Parliament to commit themselves to making it happen.

After the commission collects the views of individuals and institutions, a draft text will be prepared as of May 1 after which the opinion of Parliament and the public will be taken again. As a final step, the necessary changes will be made to the draft text and presented to Parliament for approval and then to a public referendum. Levent Köker, a constitutional professor who is the current chairman of the Abant Platform, said the Parliament that was established after last year’s June 12 elections represent more than 90 percent of the society. 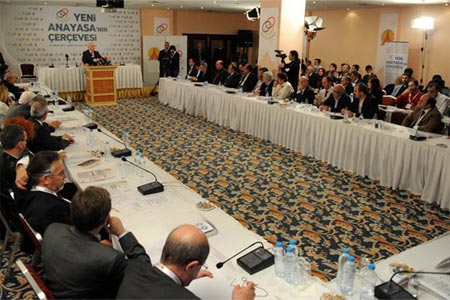 “They cannot remain deaf to society’s call for a new constitution,” he said in reference to the support from the society to get rid of the shackles put in place by the country’s 1982 Constitution, which was passed following the Sept. 12, 1980 military coup, restricting freedoms. “The debate is going to liven up since the contents of the constitution will be actively debated soon,” he added.

Mustafa Yeşil, who heads the Journalists and Writers Foundation (GYV), which has organized the Abant Platform since 1998, said Turkey needs a new constitution. “As we enter spring and leaving behind winter, we hope that cold days will be taken over by warm days,” he said at the meeting on Friday.

Also at the meeting was Erdoğan Toprak, the opposition Republican People’s Party (CHP) deputy chairman. “Here we have the opportunity to make a new constitution if we want a more democratic regime,” he said. “However, we should look at issues not only from our side but from others’ point of view as well in the process.”

The concept of citizenship and how to describe the issue of citizenship in the new constitution were discussed at the Abant Platform’s first panel discussion on Friday. In that regard, Galatasaray University lecturer Birol Caymaz said the description of citizenship should be inclusive.

On the same line, Rober Koptaş, the editor-in-chief of the Turkish-Armenian Agos weekly, said he wants to forget that he is an Armenian.

“Conditions in Turkey constantly remind me that I am an Armenian. This is a painful fact that I cannot escape from. I’d like to feel that I belong to this land, and I want to get lost in the crowds. The new constitution should promise that future to us,” he said, adding that Turkey’s Armenians do not want to be treated any differently than others but just want to be treated as equal citizens.

Speaking on the same topic, Gazi University lecturer Vedat Bilgin said a definition of “democratic citizenship” could be the key for solving problems in relation to citizenship. “The new constitution should protect micro identities and at the same time allow a macro transformation,” he said.

Orhan Miroğlu, a Kurdish writer, said on the same issue, “We should seek answers to how to keep many identities together. Not meeting demands is threatening for people. If we don’t solve this problem with a new constitution, it’s possible that different identities will seek ways to part ways.”

Participants of the Abant Platform will examine the constitutional process under the headings of “mother tongue education,” “local governments in the balance of a unitary state and autonomy,” “freedom of religion,” “religious education,” and “the position of the president in the Constitution.”

Former Supreme Court of Appeals President Sami Selçuk and academics from various universities and journalists from Turkey’s many dailies will lead the discussions.

As with every Abant meeting, the platform will release a summary declaration arising from the discussions’ conclusions. The Abant Platform is an independent think tank that takes its name from Lake Abant in the province of Bolu, the location of its first meeting. It is one of the most well-known programs of the GYV, which was established in 1994. Its mission and work were inspired by the GYV’s honorary president, Islamic scholar Fethullah Gülen.

SEVGİ AKARÇEŞME, ABANT/BOLU In the second day of discussions at the 28th Abant Platform meeting, participants leveled criticism at both Turkey and the EU while reiterating support for Turkey’s membership process at large. It was agreed that although Turkey’s long-term interests lie in EU membership, both sides suffer from fatigue as Turkey’s disappointment leads to […]