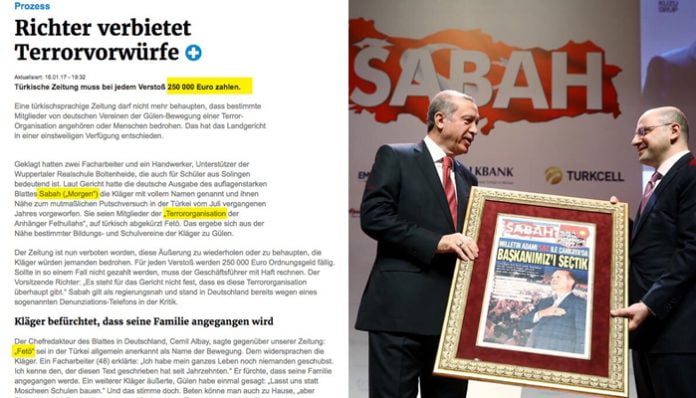 The paper, just like its sister publication in Turkey, uses the term “FETÖ” to unlawfully declare the Gülen movement and its sympathizers “terrorists.”

In a similar move to prevent hate speech and hate crime against the movement’s sympathizers, the Netherlands had in 2016 banned using the term “FETÖ,” which was coined by President Recep Tayyip Erdoğan to designate the Gülen movement a terrorist organization.

Individuals who called the De Roos School, run by movement sympathizers, a “terrorist school” or a “FETÖ school” were fined 1,000 euros for each use of either of the terms by a Netherlands court in September, Zaman Hollanda had reported.

Erdoğan holds the movement responsible for a failed coup on July 15 since the first night of the coup attempt.

On Tuesday the Times newspaper wrote that a report prepared by the EU Intelligence Analysis Centre (IntCen) revealed that although Erdoğan and the Turkish government immediately blamed the coup attempt on Gülen movement, it was staged by a range of Erdoğan’s opponents due to fears of an impending purge.

“The decision to launch the coup resulted from the fears of an incoming purge. It is likely that a group of officers comprising Gülenists, Kemalists [secularists], opponents of the AKP [Justice and Development Party] and opportunists was behind the coup. It is unlikely that Gülen himself played a role in the attempt,” said the report, dated Aug., 24, 2016.

“The coup was just a catalyst for the crackdown prepared in advance.”

Despite Gülen and the movement having denied the accusation, Erdoğan — calling the coup attempt “a gift from God” — and the government launched a widespread purge aimed at cleansing sympathizers of the movement from within state institutions, dehumanizing its popular figures and putting them in custody.