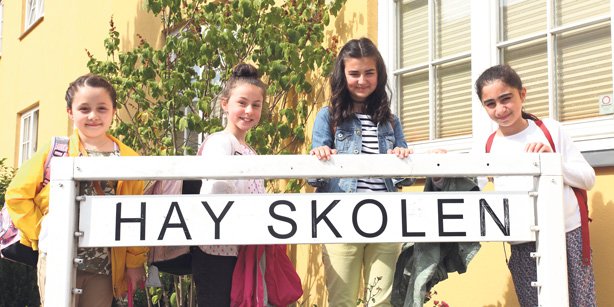 A Turkish school in Denmark has been ranked the most successful school in the country. (Photo: Cihan)

A Turkish school founded by educators inspired by the teachings of Turkish Islamic scholar Fethullah Gülen has been ranked as Denmark’s most successful school, in research conducted by one of the country’s most prominent think tanks.

Hay Skolen, a private school established in 1993 by Turkish educational philanthropists, has been declared the top school in Denmark in a report on effective education published this week by the Danish Center for Political Studies (CEPOS).

As the 2015-2016 academic term began in Denmark last Monday, approximately 720,000 students headed for school, while parents poured over the CEPOS report, published once every four years, which ranks schools based on criteria ranging from the socio-economic conditions of parents to the efficiency of educational methods.

The data for the 1,382 Danish schools included in the report was provided by the Danish Ministry of Education. Hay Skolen took the lead with 1.5 points, significantly outscoring the schools ranked second and third, both of which were given 1.1 points, while hundreds of schools on the list were ranked with points less than zero.

Danish media took an interest in the success of the Turkish school with many reporters interviewing Hay Skolen’s administrators and teachers. The turkey-based Cihan news agency also spoke with Hay Skolen’s principal, Mustafa Kolukısa. In a report published by Cihan on Tuesday, Kolukısa said: “We are very proud. We can see our hard work was not in vain. Our self-sacrificing teachers and caring parents have a huge share in this success.”

Despite Erdoğan’s efforts to shut down Gülen-inspired schools, success and prestige are upheld

In recent years, President Recep Tayyip Erdoğan has waged a war against the Gülen movement — also known as the Hizmet movement — and has pressed for the closure of Turkish schools around the world that endeavor to offer noteworthy education and promote interfaith dialog.

Erdoğan’s castigation of the Gülen movement began in December 2013 when a series of investigations implicating him and his inner circle in acts of corruption were made public. After wiretappings that allegedly revealed ministers accepting bribes were leaked on social media, Erdoğan denounced sympathizers of the Gülen movement, who he claims were behind the investigations, and declared the movement a treasonous enemy.

Most recently, in May, Erdoğan campaigned for the closure of these schools in Albania, though Albanian President Bujar Nishani strongly criticized this demand. Despite Erdoğan’s efforts, the schools’ success and prestige have been maintained and commended by notables, including heads of state, in the countries where they operate.

US President Barack Obama has hosted students from Turkish schools operating in the US several times, congratulating them for their success in many endeavors, including project competitions. Cambodian Prime Minister Hun Sen also received students from a Turkish high school in his country, after they won several medals in a science olympiad. In addition, Central African Republic (CAR) interim President Catherine Samba-Panza told school administrators during a meeting in April 2015, “You are our true friends.”

Customs and Trade Minister Hayati Yazici visited the local Nurorda International Kazakh-Turkish High School besides his official visits on day-two of his Astana itinerary. As a part of his agenda, Hayati Yazici hosted by the Kazakh Finance Minister Bolat Jamisev, met with the Turkish businessmen engaged in Kazakhstan at Rixos President Hotel on June 21. […]