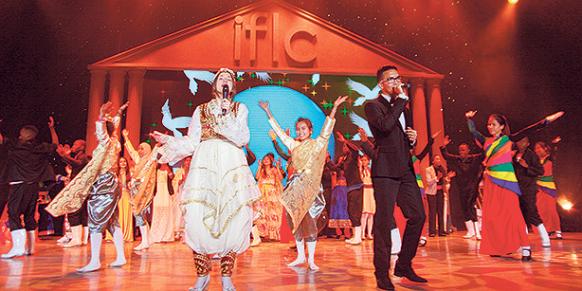 Dancers perform on stage at Washington's landmark Warner Theater on Tuesday during the International Festival of Language and Culture. (Photo: Cihan)

In what could be characterized as one of the largest events held by Turkish Americans every year in the US, the International Festival of Language and Culture (IFLC) is the new form of what was popularly known as the Turkish Olympiads and is celebrated in major capitals around the world, from Manila to Cape Town.

The Washington leg of the festival hosted dozens of students from across the world, ranging from France to Thailand and South Africa. The students from various backgrounds largely performed in sync in an effort to signal diversity and highlight peace. One of the performances, for instance, featured a duet between Bosnian and Serbian students, whose nations have long-simmering hostility since 1990s.

The master of ceremonies in Tuesday’s festival was perhaps the biggest surprise of the night — Joel McHale, a comedian who mocked President Barack Obama, politicians and journalists two years ago as the White House Correspondents’ Dinner headliner. The event was earlier endorsed by world-famous retired boxer Mike Tyson, who congratulated the organizers for the festival in a tweet he posted to his nearly 5 million followers. Sources said he canceled his participation at the last minute.

Several US lawmakers, government officials and NBA star Enes Kanter from Thunder were in the audience. Kanter congratulated the organizers of the language festival and thanked them for their efforts. He expressed his regret that it could not be held in Turkey, but welcomed it opening up to the world.

After Turkish President Recep Tayyip Erdoğan launched a massive offensive against the Gülen movement following a corruption scandal in December of 2013, he has publicly said he will not allow the movement to hold its flagship Turkish Olympiads festivities that feature month-long activities across Turkey with students from more than a hundred countries. The ban in Turkey forced the organizers to expand their activities elsewhere and organize more than a dozen similar ceremonies in many parts of the world. The organizing committee says similar festivals will be held in multiple countries in the coming weeks.

On Tuesday night, Islamic scholar Fethullah Gülen sent his message to the ceremony. “Children who are participating tonight, who blossom all around the world as flowers of love, give a message to all of humanity with their presence,” Gülen said in his statement, recited by Jena Luedtke from the Rumi Forum, the co-organizer of the event. Gülen has been living in rural Pennsylvania since 1999 and rarely leaves his residence due to his health concerns.

He hailed the festival in his message, noting that children demonstrate, “under the wings of the love of humanity,” that everyone can live in peace and tranquility, can see diversity as treasure and can enrich “ourselves through our interactions with one another.”

Gülen noted that as children grow through their involvement in activities such as the international language and culture festival, they also serve world peace through the magic of their poetry, the power of their rhetoric, the charm of their verse and the universal language of music.

Congressman Bill Pascrell said in his speech during the ceremony that it is a shame that the festival cannot be held in Turkey but “we hail the diversity here” in the US.

Before Tuesday night, the students performed at an outdoor stage in Washington’s Ellipse Park that faces the White House’s backyard where US presidents land with helicopters. The event there, free to the public, attracted hundreds of participants from the city. On Tuesday morning, the students appeared on a morning show at ABC, one of the leading networks in the US, and briefly performed there live.

In the coming days, the students will also visit the White House to meet with officials and perform there. Performing in US Congress is also on the students’ itinerary.