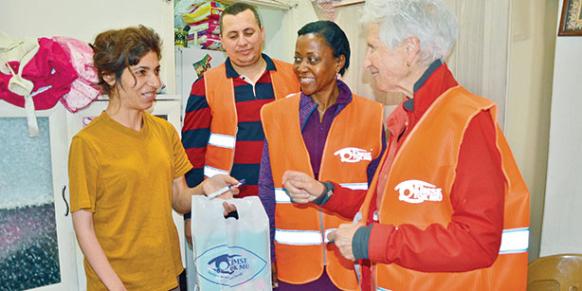 Lisa Saunders, Salil Ahuja, Sherri Outler and Margot Marshall returned to the US on Monday after spending over a week in Turkey. They began their trip on Oct. 4 in İstanbul, where they worked with Kimse Yok Mu, the largest volunteer and global aid organization in Turkey, to deliver meat to families in need during the holiday known as the Feast of the Sacrifice. Three of the four travelers are members of the St. James Episcopal Church in Austin, Texas, and came in partnership with the Dialogue Institute Southwest. The institute is a non-profit organization that looks to create peaceful exchanges between people of different faiths.

The Texans spoke with Today’s Zaman about their encounters with Turkish culture and the Islamic faith at a very local level. Because of their contacts in the institute, the volunteers were able to travel to nine cities in nine days. During their trip, though, unlike most tourists, the group had the opportunity to have dinner with local Turks in their own homes.

Outler explained: “You really learn more about Islam when you are talking to Muslims rather than just reading about it on a museum wall. You learn about it when you’re chatting with someone and they excuse themselves to go pray.” She went on to say that it is through exchanges with locals that she can ask questions like how they pray or how they choose which mosque to attend in a way that makes it relatable and provides a more natural understanding of interfaith experiences.

Another of the volunteers, Marshall, has been coming to Turkey since 1969, therefore absorbing the country’s culture for many years. Marshall has noticed many changes over the years, explaining: “Turkey is completely different now. You can really see the growth of the middle class. There is more money available to more people.”

She noted: “The farmers in the villages I visited, their kids wouldn’t go past primary school, but it is now very normal for them to go to university. They study hard and go to university. In 1969 that was unthinkable.”

“Organizations like Kimse Yok Mu, I think, are wonderful. What they organize helps people in many different ways, from orphanages and education to healthcare to building roads, things that are helping people at a very primary level. And to try to impede the good work in any way, I really just don’t understand. There seems to be no logical reason to me to want to throw a monkey wrench in that kind of machine. Why would you want to stop good work?”