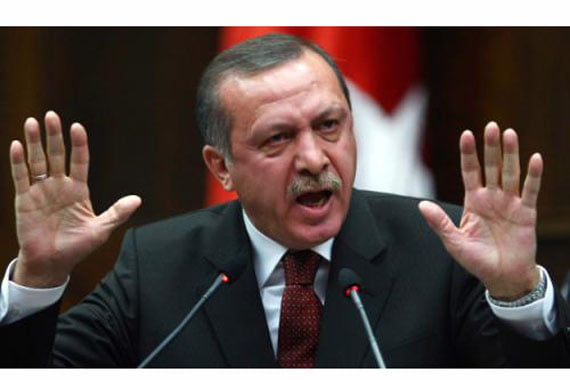 ISTANBUL (Reuters) – A feud between Turkish Prime Minister Tayyip Erdogan and an influential Islamic cleric has spilled into the open months ahead of elections, highlighting fractures in the religiously conservative support base underpinning his decade in power.

Erdogan’s government has incensed followers of Fethullah Gulen, a U.S.-based Islamic preacher whose supporters say they number in millions, with plans to abolish private ‘prep’ schools many of which are financed and run by Gulen’s movement.

The reclusive cleric drew parallels with the behavior of the secularist military in the build up to past coups.

Gulen has built a global network of schools over the past four decades promoting Turkish language and culture. In doing so, he has established a powerful movement whose members hold influential positions across Turkish society, from the police and judiciary to the central bank, political parties and media.

“The draft bill regarding closing of prep schools and reading rooms came like a dagger to our heart,” an editorial on one of Gulen’s official websites said, an unusually blunt expression of opposition to Erdogan’s government.

In a voice recording on another site, Gulen recalled the actions of the military, staunch guardians of Turkey’s secular order, which staged three coups between 1960 and 1980 and forced Turkey’s first Islamist-led government from power in 1997.

Gulen’s sympathizers, largely drawn from the same religiously-minded professional class which helped sweep Erdogan’s Islamist-rooted AK Party to power in 2002, revere him as an enlightened, pro-Western face of progressive Islam.

His critics see a more sinister agenda, accusing members of his Hizmet movement of furtively seeking to infiltrate state institutions and wield power through undemocratic means.

Closing its prep schools in Turkey – schools that provide high-standard private education to prepare children for high school and university – could deprive the movement of one of its sources of financing.

In an interview on Turkey’s ATV television late on Wednesday, Erdogan was defiant, referring to the Hizmet movement as the “opposing side”.

“If they are expecting a turnaround, they should know it is not going to happen,” he said, but denied that the draft bill on prep schools was targeting Gulen.

“Why should we side against the movement now? We find it very strange that our brothers are attacking us.”

Erdogan, accused by critics of pursuing an increasingly authoritarian style of government, has in the past said his relationship with Gulen is an issue he prefers to keep out of the public eye.

But the secretive nature of the Hizmet movement means its impact on forthcoming elections – local polls next March, a presidential race a few months later in which Erdogan is expected to stand, and general elections in 2015 – is hard to quantify.

Surveys commissioned by the AK Party have put the level of voters the movement could sway at around 3 percent of the electorate, while other sources have suggested they control up to 8 percent, according to Turkish media reports.

Gulen left for the United States in 1999, shortly before the start of a case against him on charges of plotting to destroy the secular state and establish Islamic law.

He was acquitted but has lived there ever since, presiding over a movement with influence from the United States to Africa, the Middle East, Central Asia and Europe.

In a statement on the web site of the Journalists and Writers Foundation, which has Gulen as its honorary leader, the movement said it had no plans to establish its own party.

But its real power lies within the AK Party bureaucracy and ranks and its ability to rally support for or against Erdogan.

Erdogan has won three elections in a row since 2002 and presided over an economic boom in Turkey. On the electoral map nearly all of the country – apart from the Aegean coast, the mainly Kurdish southeast corner and a small region on the European continent – is AK Party orange.

But there are signs of fracture within the party.

Deputy Prime Minister Bulent Arinc, a co-founder with Erdogan of the AKP and a long-time ally, sparred with Erdogan this month over his suggestion that regulations be drawn up to stop male and female students living together.

During anti-government protests over the summer, when Erdogan dismissed the demonstrators as looters and oversaw a heavy-handed police crackdown, both Arinc and President Abdullah Gul – both seen as Gulen sympathizers – struck markedly more conciliatory tones.

Erdogan has said that the prep schools, estimated to number around 4,000 in Turkey, boost inequality by placing an unfair financial burden on lower-income families and that in any case, only around a quarter of them are run by the Hizmet movement.

Not everyone is convinced.

“The real target is to deal a serious blow to Gulen’s movement,” Rusen Cakir, a columnist in the pro-government Vatan newspaper, wrote this month.

“The first question that comes to mind is why Erdogan is taking such a risk before local elections, and presidential elections shortly after. Does he want to test the Gulen movement’s strength at the ballot box?”

A Turkish opposition newspaper in Britain has been forced to close and its journalists have gone into hiding as supporters of President Erdogan unleash a campaign of intimidation against exiles.