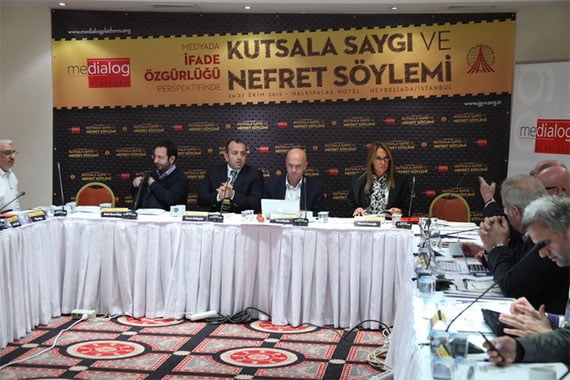 The Medialog Platform of the Journalists and Writers Foundation (GYV) held, the "Respect for Sacred Values and Hate Speech from the Perspective of Freedom of Expression in the Media" workshop.

Turkey has been home not only to a host of positive developments, but also to various discriminatory acts, injustices, unfair practices, acts of oppression, hate crimes and hate speech during the history of the republic, the 90th anniversary of which we marked on Tuesday.

Thus, diverse individuals and social groups were treated as objects of hate due to their divergent religious beliefs or faiths, mother tongues, racial origins, cultures, sexual orientations, social statuses or physical characteristics, and an incredible range of discriminatory practices has been developed in this process.

These problems soon snowballed into intricate, challenging issues, and diverse segments of society faced “otherization” pressures, acts of plunder, massacres or complete or partial exclusion from the public sphere, all because of their different characteristics. Despite recent efforts to rectify these erroneous policies, these problems continue to be a part of our life. Some areas are actually showing regression, one could say, despite improvement in others.

The government’s intention to introduce pieces of legislation concerning hate speech and hate crimes into the limited “democratization package” it recently announced is certainly a good sign. Moreover, the issuing of the Presidential Grand Award in Culture and Arts to Kurdish musician Ahmet Kaya, who died in 2000 in Paris, where he settled after becoming the victim of an ignoble media lynching campaign in the late 1990s, can be seen as another remarkably bold step to rectify past victimizations. The promising steps in this regard also include the partial lifting of obstacles to the use of the Kurdish language, the partial returning of confiscated properties to non-Muslim citizens, the holding of serious, albeit inconclusive, workshops on the problems Alevis face, the allowing of women to wear headscarves at educational institutions and in some public-sector workplaces, and similar developments.

There is no doubt that all sorts of otherization and discrimination essentially rest on hate, and therefore that othering or discriminatory acts are closely linked to hate speech and hate crime. Indeed, no act of discrimination can be considered unrelated to characteristics that make the victim of the act different or which the perpetrator of the discrimination perceives as different. The Medialog Platform of the Journalists and Writers Foundation (GYV) held, with perfect timing, the “Respect for Sacred Values and Hate Speech from the Perspective of Freedom of Expression in the Media” workshop last weekend in Heybeliada, İstanbul, with the participation of intellectuals from different ideological camps. During this event, I voiced the foregoing views. A declaration was made about the outcome of this extremely informative and awareness-raising meeting.

In this declaration, there was consensus that the fight against hate speech and hate crimes is an important matter, both in Turkey and around the world. The role of legal tools in combating hate crime was emphasized, as was the need to make sure that the legal framework to be imposed to this end does not create obstacles that would undermine freedom of speech. The declaration argued that civil work to monitor and report incidents of hate speech and insults of sacred values should be stepped up and emphasized the determining role of some legal and illegal structures within the state in fostering discrimination and hate crimes. A number of views on how to eliminate this problem, which leads to the victimization of individuals and groups, were made in the declaration. (http://www.medialogplatform.org/Haberler/Detay/2511/ )

On the other hand, the presentation by theologian and writer Ali Ünal was quite instructive, especially in explaining Islam’s approach to the matter. My impression of Ünal’s presentation was that a libertarian interpretation of Islam does not pose any obstacle to freedom of expression as long as it does not take part in defamation and blasphemy or commit any hate speech targeting practitioners of other faiths or beliefs.

The following lengthy quote from Ünal’s presentation is, I guess, a good summary of the text of the speech in terms of hate crime, hate speech and respect for sacred values:

“Respect for religious beliefs and sacred values is part of fundamental human rights and freedoms and applies to everyone. Therefore, if I enjoy these rights, then I must protect the rights of others. If respect for sacred values and religious beliefs and the right to enjoy these beliefs and values are part of fundamental human rights and freedoms, then these values and beliefs cannot be the subject of hate speech. This is because this triggers a corresponding violation and eventually leads to conflict. A man may believe his beliefs or faith to be more accurate and he may advocate, uphold or promote them, but he cannot defame or deride the beliefs or values of other people. Likewise, a view or belief may be defined or criticized from an academic angle, but this definition or criticism cannot incorporate defamation, blasphemy or denigration. Accordingly, freedom of thought and expression cannot be used to justify any verbal or physical infringement of the thoughts, beliefs or fundamental rights and freedoms of others. The distinction between promotion and defamation or blasphemy, and between hate speech and definition and defamation, and between provocation and academic criticism must be preserved.”

The rapid growth of the means of communication and transportation is increasingly shortening distances and bringing cultures closer, and it appears that all of humanity is living in a small room, despite its diversity. The peaceful coexistence of these diversities in this narrowing space is possible only with a culture of peaceful coexistence that is characterized by mutual respect and devoid of hate speech. In this context, I must note, politicians’ and media organizations’ efforts to emphasize tiny differences and turn them into polarizing fault lines in search of greater political power and influence are unacceptable.