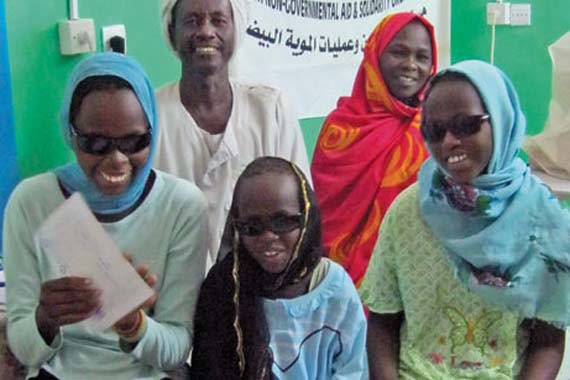 Volunteer Turkish doctors conducted cataract surgery on more than 13,000 patients in Sudan and Somalia, where cataracts are a common condition, as part of a project organized by the Kimse Yok Mu humanitarian aid association and the Aegean International Health Federation (ESAFED), the Cihan news agency reported on Sunday.

Despite efforts to combat the problem in recent years, cataracts have continued to spread steadily throughout Africa. Linked with climate factors, lack of nutrition and poor hygiene, cataracts leave their victims, many of whom are already battling famine, in complete darkness. In Sudan, which has one of Africa’s highest cataract rates, it is estimated that around 2 million people have serious cataract problems, leaving some blind from birth while others lose their sight later in life.

Turkish doctors from all over Turkey volunteered in South Darfur’s capital, Nyala, where, as a part of the project, they are providing free cataract operations in the Nyala Teaching Hospital. A similar campaign is being maintained permanently by volunteer Turkish doctors in various regions of the African continent, and last month ESAFED and Kimse Yok Mu’s volunteer doctors conducted cataract surgery on both Sudanese and Somali people.

One Sudanese family, of whose seven children three were blind, also had cataract surgery as part of this ongoing project. The father of those three children, Berham Burham, said: “When I heard that the Kimse Yok Mu charity was doing free cataract operations, I brought my three children to the office in Nyala. I registered for the surgery because I could not afford it. Now my three children had very successful operations, and we are very happy that they can see now. My family is overjoyed with the news. I could not even express my feelings, and I just want to thank the Turkish doctors who made this possible for my kids. May God bless all of them.”

ESAFED volunteer Dr. Erol Uysal, who performed the surgery on Burham’s children, said: “I cannot forget that moment when those children opened their eyes, and the joy their family shared with them was the most meaningful moment of my life. That moment I realized that I was doing something very important. We should all be very grateful for the things we have, such as being able to see. Those people will appreciate their vision more than we do, because they just found it.”

Another doctor also expressed his feelings about the surgery, saying: “The Turkish donors who made this miracle possible do not know what an important and meaningful thing they are doing with their small donations. I’m here and I know the story of these people, who are desperately in need.”

He also recounted: “There was one family in which everyone was blind: the father, the mother and the kids. Their sight was returned to all of them after a successful operation carried out by volunteer Turkish doctors. The father later found a job and was able to look after his family, and the children can now go to school. Whenever I see someone from this family they send their love to Turkey, and they pray for the Turkish people. The story of this family alone describes the needs of this region and what can be achieved by small things.”

6 March 2012 / ABDULLAH BOZKURT, MOGADISHU Kimse Yok Mu has organized regular trips for Turkish doctors to provide medical care to the poor and needy in Somalia. A group of 30 Turkish doctors goes to Somalia every 20 days and leaves when a new group of doctors arrives. Kimse Yok Mu is also renovating Banadir […]