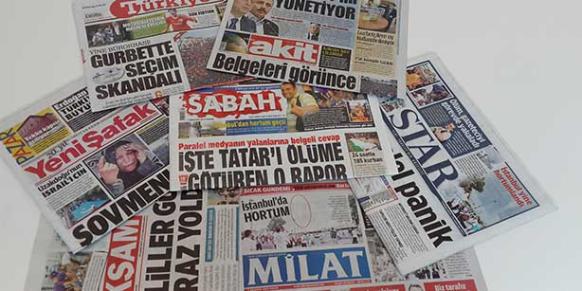 Some of pro-government newspapers are seen in this collage prepared by Today's Zaman.

The Turkuvaz Media Group, which includes such popular outlets as the Sabah and Takvim dailies and the ATV channel, as well as the English-language Daily Sabah, has been referred to as the “pool media” since allegations surfaced that a group of businessmen formed a pool of funds to purchase the group on the instructions of then-Prime Minister and current President Recep Tayyip Erdoğan in return for privileged treatment in public tenders. These allegations are based on a number of leaked voice recordings, purportedly of Erdoğan and businessmen who were involved in the scheme.

The Zaman daily published a story in February of last year detailing this plan according to information on the leaked tapes, and Turkuvaz subsequently filed a lawsuit in an İstanbul court against Zaman, arguing that the latter was guilty of defamation. However, Zaman’s lawyers argued that the purpose of the story was simply to inform the public and the court ruled on Zaman’s side, dismissing the case.

The term “pool media” has also been used in broader reference to all pro-Justice and Development Party (AK Party) newspapers and channel. Many of these are owned by contractors with close ties to the AK Party who have been awarded lucrative contracts for major construction projects.

There is a widespread perception that these media outlets function as a mouthpiece for the AK Party and are maintained with the tacit understanding that lucrative tenders and contracts will continue to be awarded to the owners.