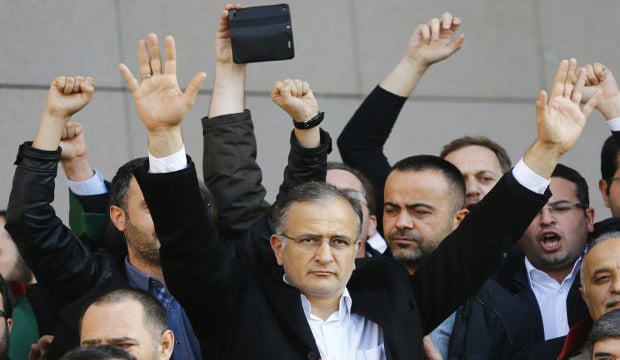 Zaman editor-in-chief Ekrem Dumanlı greets his supporters after being released by the court outside the Justice Palace in Istanbul, on December 19, 2014. (Reuters/Murad Sezer)

Dumanlı, editor-in-chief of Turkey’s main opposition Zaman newspaper, was released less than one week later following a court order, although others arrested in the raids remain behind bars awaiting their day in court.

The dispute between Turkey’s ruling Justice and Development Party (AKP) and its former closest ally Hizmet is just over a year old and comes after media outlets affiliated with Gülen’s movement, including Zaman, broke the story of a corruption scandal that reached the highest echelons of power.

In a broad-ranging interview with Asharq Al-Awsat, Dumanlı speaks not just about Ankara’s campaign against Zaman, but also about the general state of the media in Turkey.

Asharq Al-Awsat: You’ve just recently been released from custody. What was your experience behind bars like?

Ekrem Dumanlı: To be frank, this is not my first experience in prison. When the 1980 military coup took place, I was just a 16-year old student. I was arrested at the time and held for a whole year before my trial where I was found not guilty. If we are to compare between prison then and today, then I can say that the conditions today—from a purely technical standpoint—are better. However, the most saddening thing is that while there were incidents of torture at police stations during the coup, there was also a general state of public confidence in the judiciary in the eyes of the people. Today, although the situation in police stations has improved significantly, the Turkish people feel a sense of deep fear and concern. The political mechanism that is governing the judiciary has shaken our confidence in the judicial system and justice.

Q: What did the investigation into you and the other media figures focus on?

There can be no doubt that the investigation was rushed and focused on baseless accusations. This is something that is clear to all parties, particularly as the evidence they have against me is nothing more than two articles and one news report, as the judge himself told me. But the truly shocking thing is that I am not the one who actually wrote any of these articles which they used as an excuse to condemn me.

Q: The government has accused you of being part of a terrorist “parallel organization.” Does Fethullah Gülen’s movement really merit this label?

The Hizmet movement is known throughout Turkey and more than 160 other countries for its civil activities in the fields of education and international peace, as well as for helping the poor and promoting interfaith dialogue. So accusing this movement of being a “parallel organization” is nothing more than a political manoeuvre which aims to cover up the biggest case of corruption in the history of the Turkish Republic . . . and which resulted in the resignation of four government ministers.

What is ironic is that even as little as one year ago—before the corruption revelations—prominent figures within the ruling AKP, including Rresident Recep Tayyip Erdoğan himself, were describing the Hizmet movement in glowing terms due to its great services and successful works in service to national development. Everybody who lives in Turkey, and in fact the world, can see that the Turkish government has moved away from democracy and increased the levels of corruption in the country, particularly over the past three years. If the Hizmet movement had applauded this bad behavior on the part of the government we would not be having the problems that we are now.

Q: But there are many people, within Turkey itself, who believe the allegations. Who agree that Hizmet is a terrorist “parallel organization” and a threat to the state. What would you say to them?

Sami Selçuk, the former head of the Turkish Supreme Court of Appeals, has described all the talk about Hizmet being a “parallel entity” to be nothing more than nonsense. The question that we should ask is: why did the AKP government only target the Hizmet movement after it revealed cases of government corruption, when it had previously accepted and welcomed it over the past 12 years? With its accusation of forming a “parallel organization” and armed terrorist group, the government is defaming Hizmet in a manner that goes not just against the law but also reason.

Fethullah Gülen, as an Islamic scholar, supports universal human values such as democracy, human rights and the sovereignty of the law, completely rejecting violence whatever the objective. So, accusing prominent people affiliated with Hizmet of forming a terrorist organization—despite the fact that they have not participated in any acts of violence until now—is absurd and lacks any legal guidance. Zaman has thirty years of journalistic credibility as part of its quest to achieve true democracy in Turkey, and we will continue to report the facts to this end.

Q: After all this, do you have any intention of changing your approach or Zaman’s editorial line? What about Ankara’s claims that Zaman is biased and represents just one side of the conflict?

The government is discriminating against Zaman reporters, including not allowing Zaman reporters to attend press conferences by the presidency, premiership and many ministries and municipalities. This is a policy that has been in effect since the end of August, namely since Erdoğan took office as president.

We have also been subject to atrocious campaigns aiming to discredit the newspaper and harm our reputation. Senior officials have even publicly called on the Turkish people not to buy our newspaper, and called on journalists to resign from their positions. Amid all this, we have seen an increase of injustices, day after day, due to our explicit aim to uncover and reveal the facts to the public. I was arrested on trumped up charges in front of the entire world. But we will continue our search for the truth, as we always have, regardless of the figure or party that is facing us.

Let me also say that we are not one side of any conflict. What we are not doing is not out of opposition for a particular government or party. We will continue to deal with all political parties equally and remain equidistant from all.

Q: The government says that basic freedoms in Turkey remain safe and secure, but that this does not mean they should allow crimes to go unpunished, particularly if they are committed by journalists. Do you fear for freedom of expression in Turkey?

The accusations of belonging to a parallel terrorist organization that were made against me and my colleagues were not based on any legal evidence. This is enough to raise concerns and fears regarding the clear retreat of freedom of thought, freedom of expression, and the freedom of the press in Turkey. We can add to this hundreds of opposition journalists being fired from their jobs, and the ban on Twitter and YouTube.

Q: How would you rate the laws relating to the freedom of the press in Turkey? Are these sufficient to protect Turkey’s journalists?

The real threat directed towards freedoms in Turkey is not due to a reduction in laws, but rather because we are now experiencing a period where the government does not recognize the laws and is violating all national and international principles. The laws that guarantee these freedoms are nothing more than ink on paper. The government has written over this, legalizing the repression and intimidation that it is carrying out via the police and judiciary.